Much like the dreaded mutagenic viruses that often show up in the series, Resident Evil Revelations 2 is a sort of experiment, although the willingness of the test participants are arguable. It's the series' first attempt at an episodic format, and it brings back some of the cooperative elements that worked well in Resident Evil 5. The results are kind of ugly, but there is some hope this test could mutate into something better.

Claire Redfield makes a big return in Revelations 2 as part of an organization called Terra Save, tasked with cleaning up after bioterrorism events. She's attending a fundraising dinner when paramilitary soldiers come crashing in and kidnap her along with several other people. She awakens in a mysterious prison with a strange cuff locked onto her wrist, and is joined by Moira Burton. The two set forth to discover the truth behind their captor, a figure that calls herself the Overseer, and try to figure out a way to escape. They soon discover that they're on island populated by violent mutant monsters. 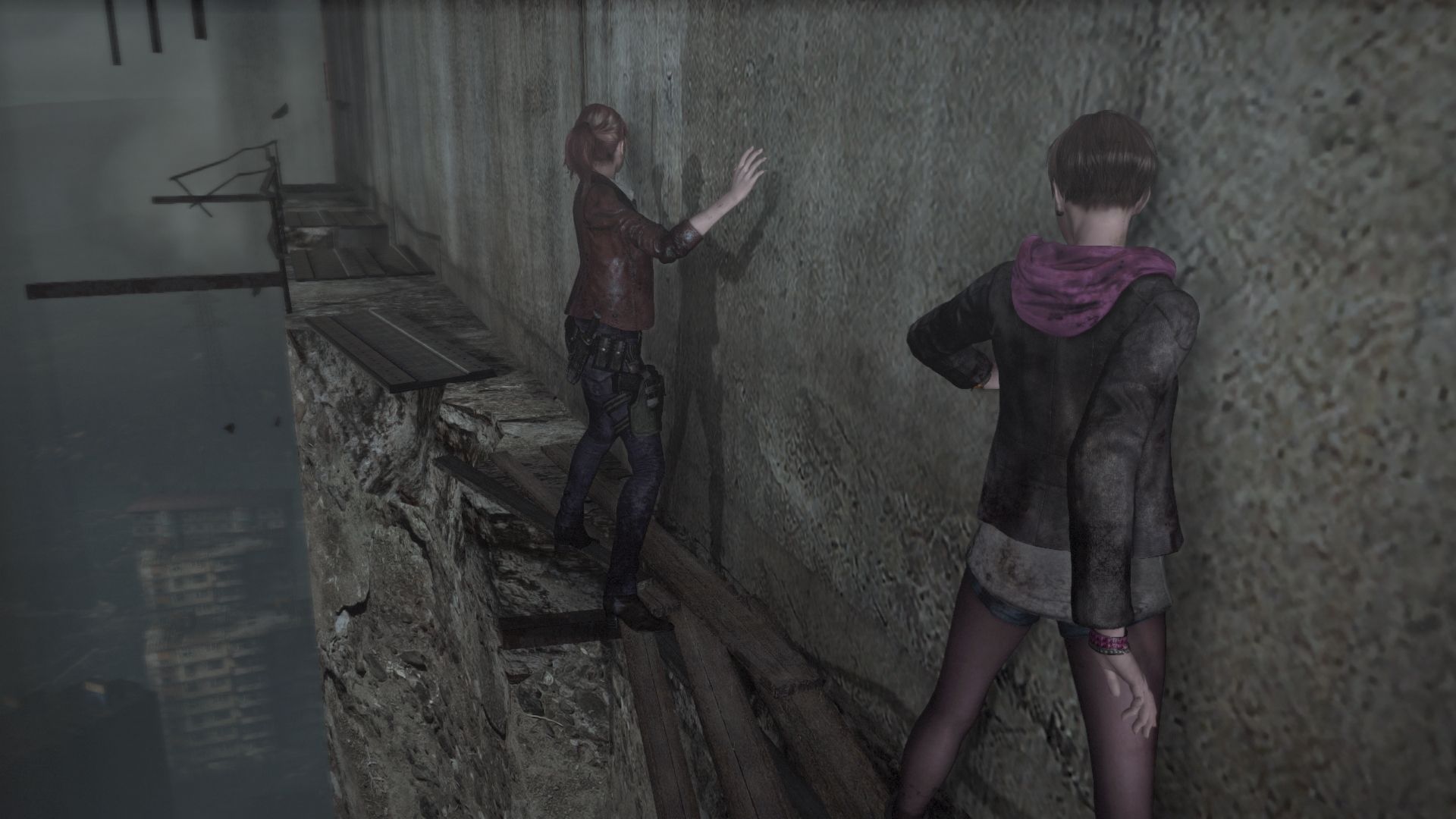 The relationship between Claire and Moira is fairly straightforward. Claire is the one that carries the guns, and Moira is the one who confuses profanities for wit. She also carries the flashlight and wields a crowbar. The flashlight can be used to reveal hidden items and it's good for stunning monsters if she shines it in their faces. The crowbar is for bashing, the occasional finishing move, prying open doors, and for an annoyingly complex lockpicking mini-game. However, Claire is the main character, and therefore needs the most attention. Moira can be helped up if she gets knocked down by a monster, while Claire's death leads to a Game Over screen.

Resident Evil Revelations 2 is the kind of game that screams for cooperative gameplay. The AI is nowhere near good enough to support the player. Oftentimes, it will stand around and stare blankly as a monster swings a giant hammer at her head. You can only direct your companion to stand still or follow, but there are no advanced commands like telling it to stun a specific monster. The AI won't do anything to defend itself when attacked, and Claire's self defense moves must be unlocked, which makes sequences where the two get separated infuriating.

Constantly switching between characters gets old really fast, so I convinced a friend to play cooperatively with me. We didn't like how the views use two asymmetric screens surrounded by thick black borders. Apart from that, the game immediately becomes much better... for whoever is playing the main character. We soon discovered that Moira is just a token sidekick. Other than accidentally being nudged off a cliff, she is invincible, so we let her take point as monster bait.

My friend quickly grew sick of his role as ineffective sidekick. What made the cooperative elements of RE5 fun was the fact that both characters were on equal footing. In Revelations 2, it's too obvious that one character is more important than the other. It's also really easy to exploit the supporting character's invincibility by having her draw out creatures while you either shoot or stab them.

Each of the four episodes is divided into two parts. The first half covers Claire and Moira's search for the truth. The second involves Barry Burton, who comes to the island in search of his daughter Moira. He teams up with a little girl named Natalia, who has the ability to detect mutants through walls and see invisible monsters. 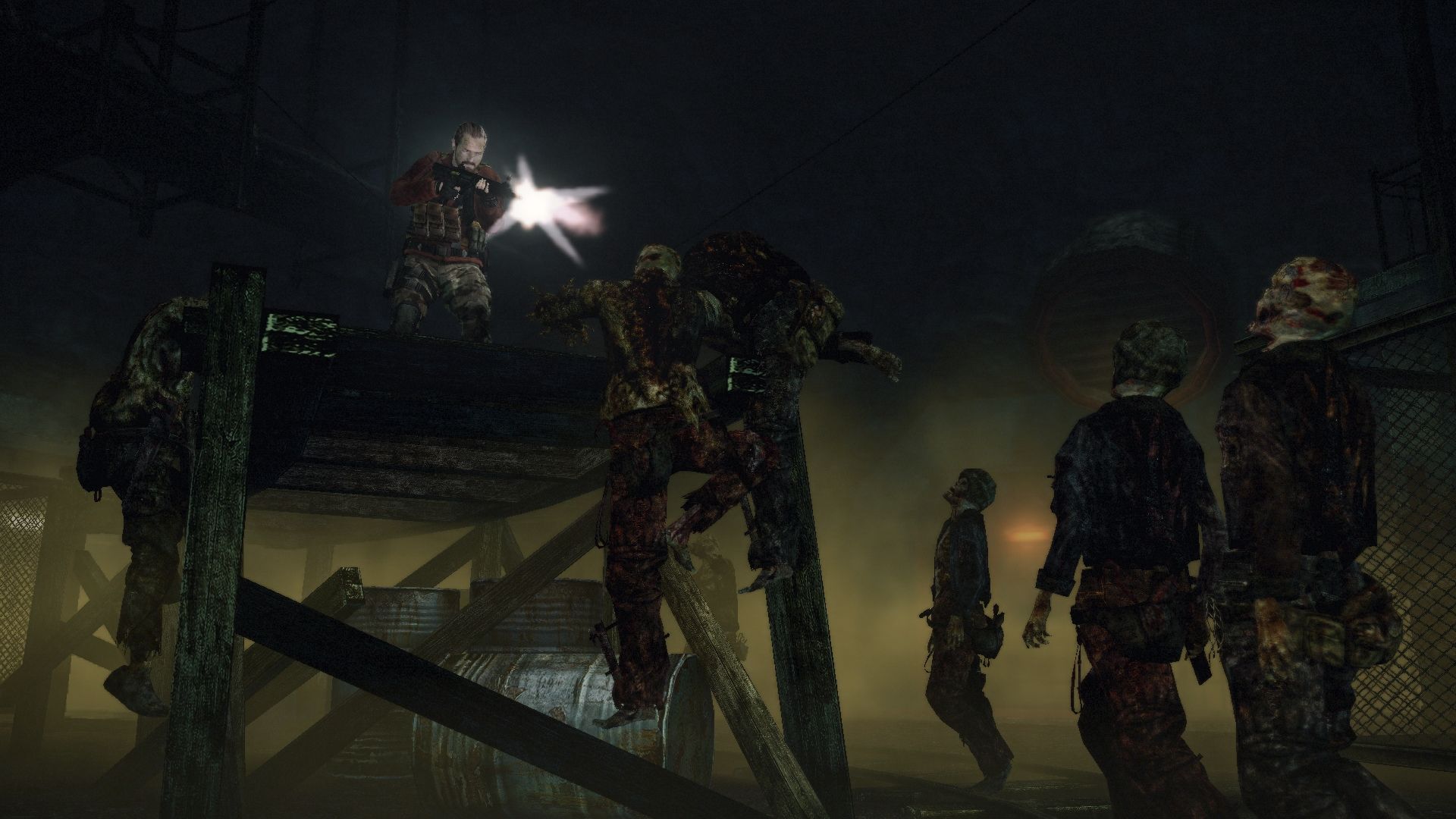 Barry arrives on the island six months after Claire and Moira's events. So, Claire's story can impact Barry's in a number of ways. If Moira pries open a door, that opening will be available to Barry. If they kill a puss monster but leave its mines behind, Barry will have to deal with them in his story. As nice as these time crossovers are, they're inconsequential. It isn't as though prying a door leads to an alternate route for Barry to use. At best, it reveals an extra room with equipment in it.

I ended up liking Barry's story much more than Claire's, and not just because Moira's personality wore on me. Claire's story is largely reactive, with the Overseer summoning a wave of monsters to come and attack. Barry's story is more proactive. Natalia can spot enemies through walls, giving Barry a chance to sneak up and kill them. By using stealth, I ended up with far more ammunition than I knew what to do with, which I saved for the boss fights. There's also no expectation for Natalia to fight, so the AI works better with her, offering healing support when necessary.

If I haven't made it abundantly clear, Resident Evil Revelations 2 must be played with a second person, preferably someone who doesn't mind having a passive support role. It's easier to appreciate the story and gameplay, which aren't half bad, when you don't have to switch between characters all the time. The game features some clever puzzles, and the story concludes with an exciting finale. 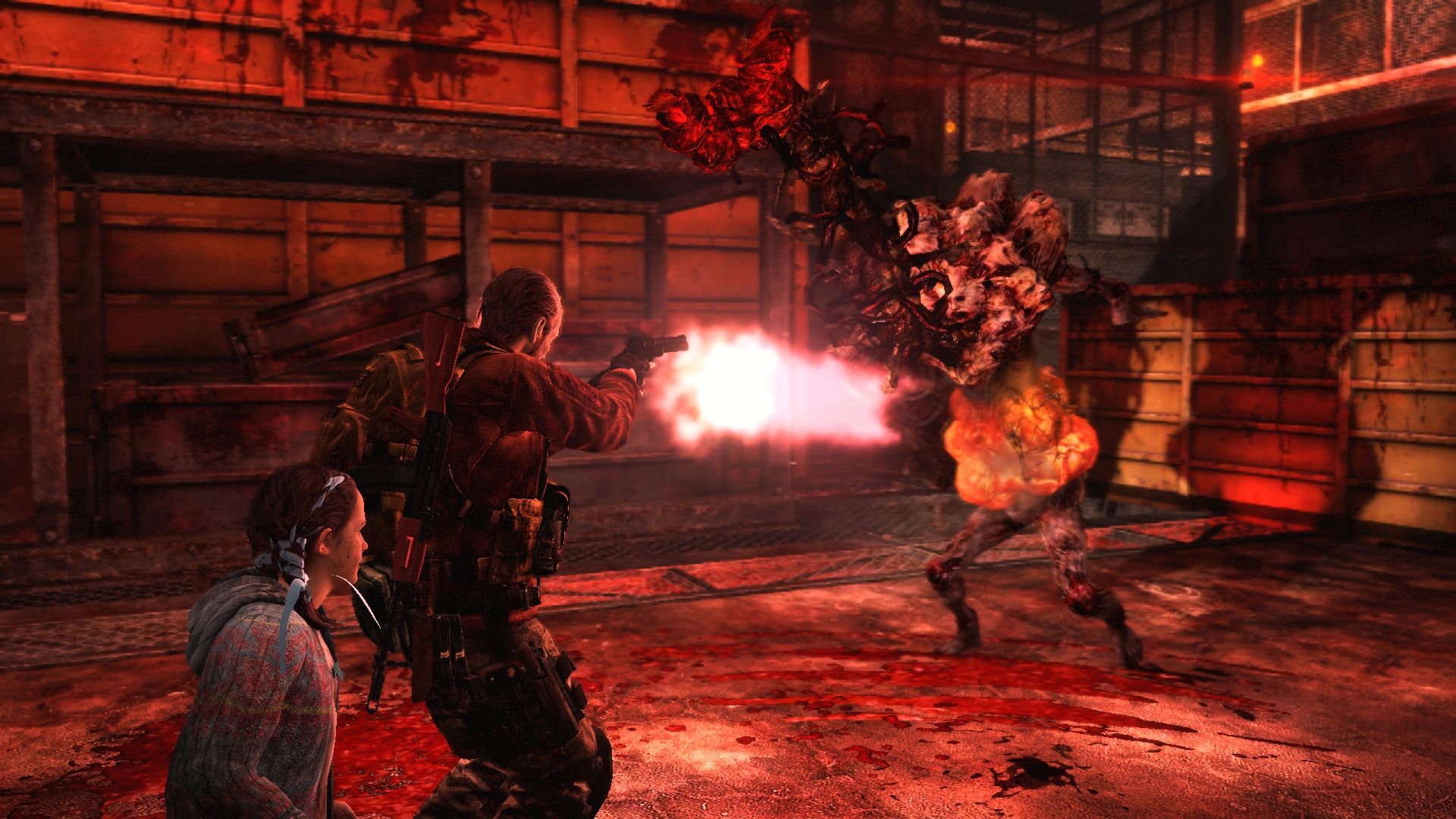 Furthermore, the episodic releases do nothing more than stretch things out over a period of four weeks. Inventory, ammunition, and skills carry over, but players never make any decisions that impact how the next episode will turn out. There's a stronger connection between the Claire and Barry's cross-time stories than there are episode-to-episode ties.

An argument could be made for the weekly content additions Raid mode, the game's competitive multiplayer, which isn't considered in this review. There are also bonus episodes that detail how characters like Natalia survived on the island during the six month gap between Claire and Barry's stories. However, these are things that could have been easily included in a straightforward game release.

We can treat the Revelations 2 experiment as a learning experience. This game should be dissected, studied, catalogued and put into storage. I genuiniely hope that there will be another Revelations game--one with better cooperative gameplay and perhaps doing away with episodes altogether.

This review is based on a PC code provided by the publisher. Resident Evil Revelations 2 is available digitally, for $5.99 per episode or $24.99 for the whole season. The game is rated M.