Rumors of what the upcoming PlayStation 4 2.50 firmware update will offer have been circulating around the Internet due to a number of leaks those who have access to its beta have released.

Twitter user @heleius posted images of the PlayStation 4 menu showing firmware 2.50 is expected to contain a highly-anticipated feature, Suspend mode. The images have since been deleted, most likely due to the information being against any NDA @heleius may have agreed to, but the images are still out there, and can be seen for yourself below. 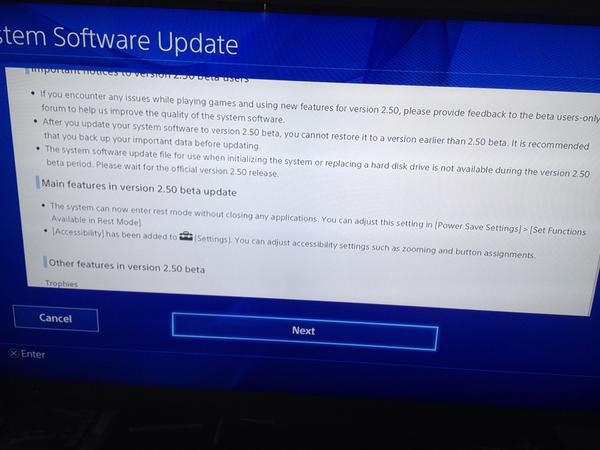 In addition to Suspend mode, other rumored features include support for 60fps streaming during Shareplay and Remote Play, the ability to hide games that have 0% trophies unlocked, and remapping controller buttons.

Another Twitter user @isaparrot also posted some additional information regarding the firmware 2.50 beta that shows it may be possible to back up applications from the console to an external hard drive. Whether or not content can be played off of a backed up external hard drive is completely unknown at this time, although I would certainly like to see that happen. Some changes to trophies have also reportedly been included, such as trophies automatically syncing in the background and the ability to search the Internet for a trophy guide directly from the PS4.

As with all rumors, until Sony makes their official announcement, keep all of this under your hat. While it's under there, hope really hard that these unofficial possible leaks of the 2.50 firmware turn out to be true.