Shacknews last went hands-on with 13AM's multiplayer racer Runbow back at last year's IndieCade and had a blast competing with eight other players to see who could rack up the most victories. That game remains just as manic as it ever was, but 13AM has since made some noticeable additions during this year's Game Developers Conference. Not only is the game crazier than before, but now it has a whole new character and a new game mode that pits the GamePad user against everybody else.

Customization options for Runbow are just as plentiful as before, with main character Hue receiving some minor tweaks and looking more svelte than before. But given Runbow's casual appeal, 13AM decided to add in a female counterpart named Val. Both Hue and Val will now have additional outfits to choose from, including pirate and lumberjack attire, just to name a few. 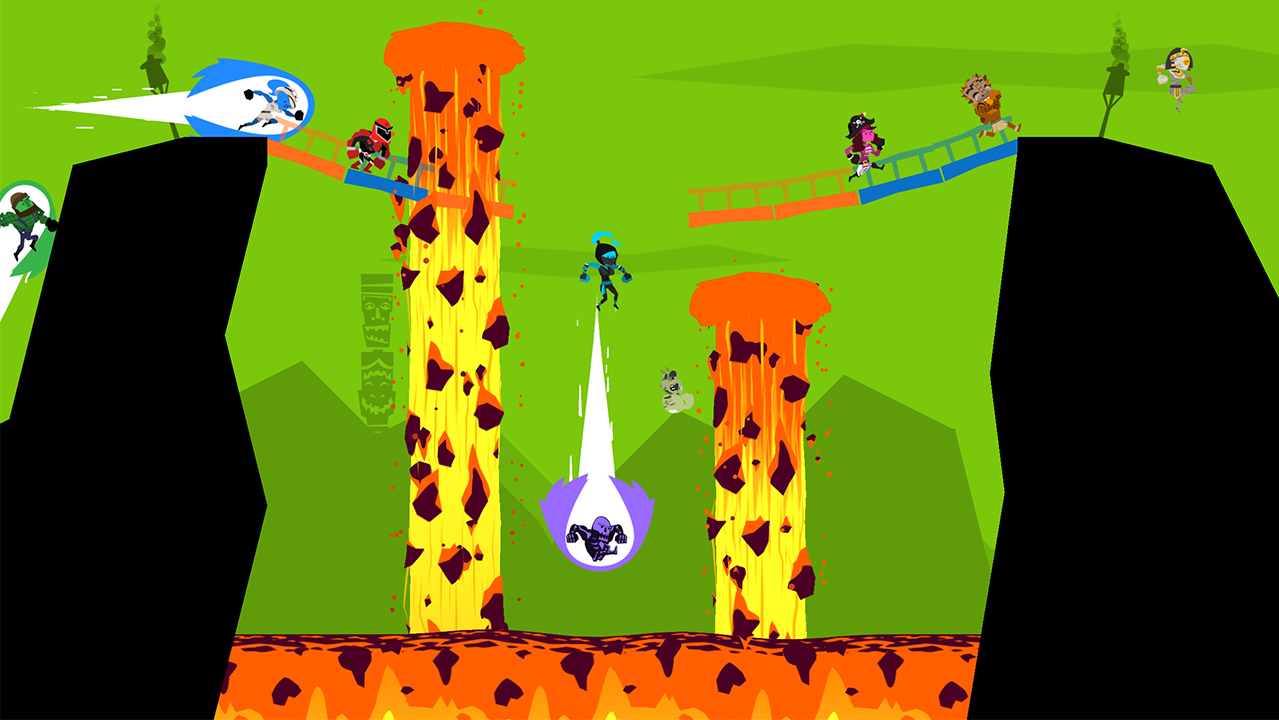 Players can still take part in standard races, which are just as frenzied as they were at IndieCade. The object remains to race to the finish, with screen colors changing every few seconds and momentarily wiping out any platforms of the same color. This time around, 13AM has added some new power-ups to the mix. Lightning, swapper, and power glove pickups were among the ones on display back in October. New pickups include the black-and-white brush, which will turn the entire screen gray, meaning all platforms and walls will remain solid. Another power-up, called mimicry, will turn all players into copies of whoever picked it up, causing mass confusion. There's also a new effect that will turn the screen upside-down, making precision jumping far more difficult. Just as during IndieCade, power-ups are a major gamble, with the potential for huge gains and greater drawbacks. New standard attacks, such as the spike (think "Meteor Smash" from Smash Bros.), the charge, and the butt stomp, have also been added to the player's arsenal.

The GamePad player will have some of these toys to play with in Runbow's new mode, called Color Master. Color Master will see the remaining eight players team up in a race for survival, while the Color Master attempts to eliminate them all. The GamePad player will have bombs, lightning attacks, control scrambles, and color-based disruptions at their disposal. If all racers bite the dust, the Color Master receives 8 points. If any of the runners make it to the goal, their team will receive a point for each survivor. While standard races can often tilt towards a single-player, these Color Master sessions end up being a lot closer in practice. The GamePad controls are easy to grasp, with helpful icons along the top of the screen that simply need to be tapped to activate, though there are a few issues with some of the cooldown timers.

However, the hands-on was just the beginning for Shacknews' time with 13AM's multiplayer romp. Come back next week when Shacknews goes one-on-one with producer Dave Proctor to discuss the game's progression, changes, and challenges in getting nine players together. Runbow is set to release later this year on Wii U as a part of its eShop lineup.