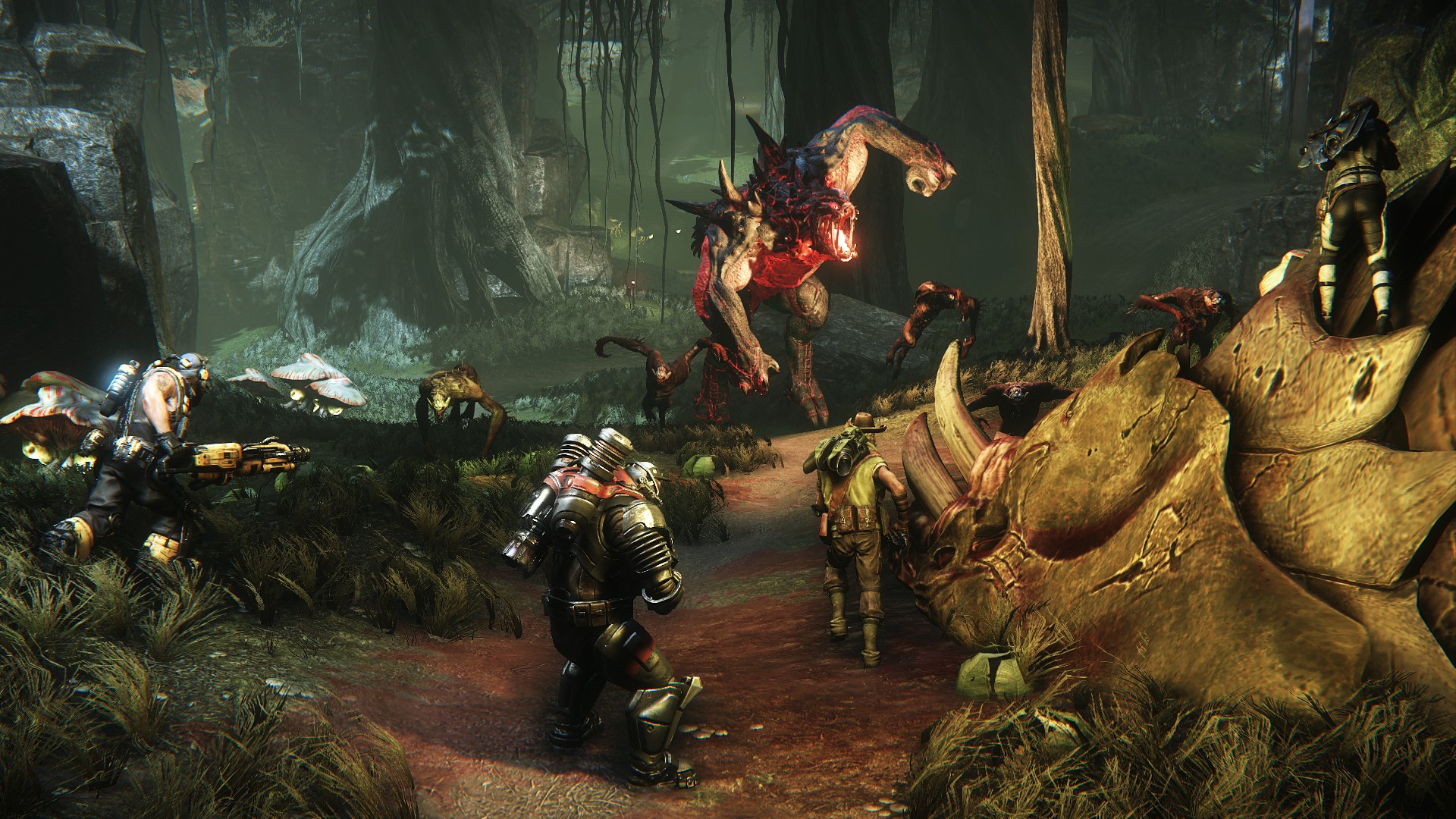 We’ve already given some basic tips for playing as the Monster, however, if you’re sporting one of the Hunter roles you’re going to run into a whole different set of problems. Evolve is a game about teamwork, and a team that doesn’t work together dies alone. Choose the right character, make the right choices, and you’re bound to take out the monster before it gets too far. Make the wrong choices though, and you’re in for a world of hurt if the Monster reaches Stage 3.

To get things started let’s break down every class, their special abilities, and the different characters those classes have.

The Assault is the main damage dealer of the game, and armed with heavy-damage weapons he’s going to be one of your most important team members to keep alive. All three of the current Assaults sport the Personal Shield, a self-shielded power up which temporarily blocks all incoming damage. It’s very useful for moments when your health drops too low and you’re waiting for heals from your Medic.

Markov is the first Assault you’ll have unlocked, and he’s a pretty big fellow. One of his greatest weapons, the Arc Mine, should be used to cripple and destroy the Monster as it barrels towards you.

Tip: As Markov players should lay a circle of Mines for their teammates to hide within. This is especially useful for those times when the Monster moves in to attack the Medic or Trapper.

Hyde is a bit more sadistic in nature than Markov, and after unlocking him he’s very useful for maps with tight alcoves for the monster to hide in. His Toxic Grenades are a fantastic tool for forcing the monster out of hiding, however, it does slow down Hunters when they pass through it, so it should be used sparingly.

Tip: When playing as Hyde use your Toxic Grenades to force the Monster into Harpoon Traps, or out of hiding.

Parnell is the final Assault character you’ll unlock from base game, however, he’s certainly not the least effective. Armed with his Super Soldier ability he’s able to temporarily increase his movement speed and damage output for a small cost of health points.

Tip: If the Monster is trying to escape and is almost down use Parnell’s Super Soldier ability to increase your speed and run the Monster down, effectively finishing him off with your Rocket Launcher.

The Trapper’s main priority is to track and trap the Monster. Seems easy enough, right? As the Trapper you’ll be in charge of the Mobile Arena, a timed energy dome weapon which closes around the Hunters and the Monsters and locks everything inside.

The first playable Trapper, Maggie, is a tough-as-nails fighter who is accompanied by her pet Trapjaw, Daisy. Daisy is her unique class option, and helps track the monster using smell and Monster tracks. So far her smelling powers seem to be linked to dead animals, as well as the noise of Scare Birds.

Tip: When playing as Maggie players will want to pay close attention to which directions Daisy goes. She isn’t perfect, but sometimes her powers of deduction will lead you right to the Monster. If you ever see an exclamation point above her head that means the Monster is close.

The second unlockable Trapper is Griffin. He’s a savvy accent wielding champ whose unique class option, the Sound Spike, is very useful for locking the Monster into a corner and blocking off sections of the map. The Sound Spikes pick up any trace of the Monster when it isn’t sneaking, and highlights it on screen so players can easily locate it.

Tip: Set up the Sound Spikes where they barely touch edges in the center of the map. You’ll want to place them effectively to cut off the Monster’s movements, which will in turn allow you to track it better.

Griffin runs with the Gauss SMG, the Harpoon Gun, Sound Spikes, and the Mobile Arena.

The final Trapper of the base game, Abe is a Shotgun toting gun for hire just looking to make a good living off killing things. His unique class item, the Tracking Dart Pistol, is great for tagging and keeping an eye on the Monster as the players chase it.

Tip: When pursuing the Monster stay out of sight, but make use of your Tracking Dart Pistol in order to highlight the Monster’s movements.

The Medic class is the healer, the wound closer, and one of the most important pieces of your team. Their ability to quickly revive and heal teammates is a great addition, and the class component, Healing Burst, is a welcome relief for all aching Hunters.

The first of the Medics, Val is responsible for not only healing the other Hunters, but also for piercing the Monster’s armor and slowing the Monster down with her Tranquilizer Gun.

Tip: Use Val’s Tranq Gun to slow the Monster down and keep it tagged so your team can better pursue it.

Lazarus is a fantastic medic, and is one of the greatest options for picking your fallen teammates up. His special ability, the Lazarus Device, can bring Hunters back from the dead without them earning a Strike.

Tip: If players go down, let them die, or make use of your Personal Cloak to get to them and revive them.

Lazarus runs with the Silenced Sniper Rifle, the Lazarus Device, the Personal Cloak, and the Healing Burst.

Caira is the most violent of the Medic class, and her special ability, the Acceleration Field, allows for the players to receive a brief speed increase, which is useful for catching up with (or escaping from) the Monster.

The Support is the secondary damage dealer of your party, and is also important as he buffs the other Hunters. The class ability, the Cloaking Field, allows the Support to cloak all the Hunters around him temporarily as long as they stay within a certain range of him. This is very good for sneaking past Wildlife, or for stealthily tracking the Monster.

Hank is one of the greatest characters the Support lineup has to offer. His Shield projector is extremely useful for keeping wounded teammates from falling, and teamed up with a good Medic your party is almost guaranteed to stay alive… at least a little while.

Tip: Hank’s Shield Projector is fantastic for keeping the Hunters alive, however, his Orbital Barrage skill should not be overlooked, and is great for dealing massive amounts of damage to the Monster.

Bucket is the metal hunk of the Support class and sports a very helpful UAV, which can help track the Monster. This bad boy also wields a Guided Missile Launcher and Sentry Guns, and is all about helping his teammates take down the Monster as fast as he can.

Tip: Bucket’s UAV is great for tracking the Monster, and the Sentry Guns make great ambush items for use against the Monster.

Bucket may not look like much, however, inside that cold metal exterior he’s hiding a Guide Missile Launcher, Sentry Guns, a UAV, and the typical Support Cloaking Field.

Calbot is the bad boy of the Support class, and not only is his primary weapon massive, he’s also sporting one of the most useful class items ever, the Damage Amplifier.

Tip: Use the Damage Amplifier on your party’s Assault character to maximize damage output when facing off against the Monster.