Only one trio of characters can win the video game world's hearts and then find themselves lost for the next two decades. They're the Lost Vikings, who have finally re-emerged for the first time since the 16-bit era to grace Blizzzard's MOBA, Heroes of the Storm, as its latest characters.

The Lost Vikings control quite uniquely in Heroes of the Storm, as they count as one single character selection, but actually control individually. This may sound strange to younger generations. To those that grew up in the era of the Super Nintendo and Sega Genesis, they wouldn't have it any other way. After all, this is how the Lost Vikings have rolled since the very beginning, back when they starred in their own series of quirky puzzle-platformers. Yes, before the days of World of Warcraft, Diablo, StarCraft, or Hearthstone, one of Blizzard's premier franchises was The Lost Vikings.

So just who are these guys, anyway? Today, Shacknews is taking a look back at the original 1992 Lost Vikings game, analyzing what made it such a cult classic, while also speaking to some of Blizzard's developers to give us their perspective on the trio and the legacy they have left. 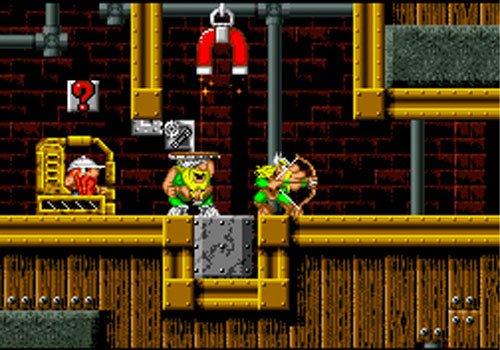 The Lost Vikings were led by the red-haired Erik the Swift, who starts the game's tutorial off by taking his two Viking pals on a great hunt. Once the game begins, Erik separates himself from the pack as the only Viking that can jump. He can run faster than his brethren and also use his hardened helmet to bash through walls. In a pinch, his headbutt can even plow through enemies.

Baleog the Fierce is the muscle of the group. He wields a mighty sword and bills himself as the toughest of all the Vikings. He's the only one of the group that can engage enemies directly in combat and must often carve a path for his fellow Vikings. If necessary, he can also attack from a distance by using his trusty bow and arrow, which can also be used to flip distant switches. He often swings first and asks questions later, which is a good reason why the thinking is best left to Erik.

Olaf the Stout is the lovable big man. Believe it or not, he did once have the power of speech before the most recent Heroes of the Storm trailer gave him the speaking power of the Swedish Chef. (Bork! Bork! Bork!) As the massive big guy, Olaf carries a shield appropriate for a man of his stature. He not only uses it to deflect enemy attacks and protect his fellow Vikings, he also uses it as a makeshift hang glider. The hang glider effect can be used to float safely to new areas, while one of the other Vikings can also hitch a ride on top. 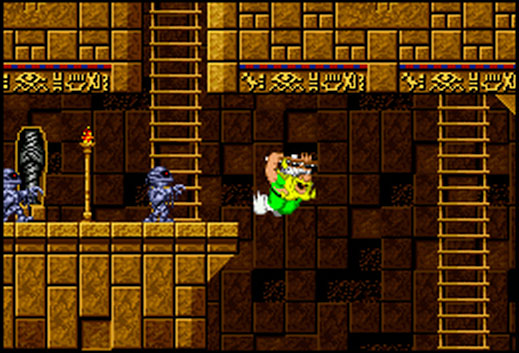 After a successful day of hunting, the Vikings are all suddenly abducted by extraterrestrial forces, as is typical of that time period. Finding themselves aboard a strange spaceship helmed by a salad-inspired race of aliens called the Croutonians, the Vikings have to find a way to escape across over 35 levels. Along the way, they must contend with the forces of the evil Croutonian leader, Tomator, an evil emperor hell-bent on making the Vikings into his latest zoo exhibit.

The novelty of The Lost Vikings starts to kick in several levels in. The three Vikings must all work together to flip switches, defeat hostile aliens, and all reach each stage's exit together. And yes, all three Vikings must make it to the end, so if one bites the dust, it's time to start over. Given the multitude of obstacles, like conveyor belts, lasers, electrified gates, and sentries aboard the ship, it's definitely not an easy task to keep everyone coordinated, especially given that while controlling a single character, the other two are completely vulnerable to attack.

That's just scratching the surface of what The Lost Vikings is, though. A few levels in, the Vikings find a wormhole that takes them across time and space. Players are taken across different environments, such as prehistoric times, the Egyptian desert, an industrial factory, and others. Stages would get progressively more difficult, challenging the Vikings to collect keys and use various inventory items to find ways forward, while also occasionally finding some hidden walls and bonuses.

Beyond the gameplay novelty, The Lost Vikings was lauded for its writing and sense of humor. The Vikings are essentially men out of time aboard the futuristic space vessel, with one of Erik's first encounters with a friendly alien containing the questions "What's a janitor?" and "What's a computer?" In-between stages, the three Vikings will often fight amongst themselves in Three Stooges-like fashion, while also making observations about their surroundings and even some meta jokes about the game itself. Just an example of the dialogue:

Erik: Do you guys have the feeling that we are being watched?
Olaf: Yeah, almost like someone is controlling our every move.
Baleog: You two are just paranoid.
Olaf: Oh yeah, well who is that person staring at us right now?
Baleog: He's right! Let's get out of here!

The Lost Vikings wasn't just a clever puzzle game, it was also cleverly written and had the kind of humor and sharp wit that wasn't all that common in an early 90s console game.

The Lost Vikings went on to become a major hit on the Super NES, with several ports being released a year later. Blizzard would follow up their original tale with a Super NES sequel, The Lost Vikings 2, coming in 1997, nearly a year after Nintendo released the Nintendo 64. With gaming having ushered in a new era, ports were later released for PC, PlayStation, and Sega Saturn. This adventure would be the last anyone would see of the Vikings before Blizzard would go on to focus on its core franchises that persist to this day.

However, the legacy of Erik, Baleog, and Olaf is widely remembered and hallowed across the Blizzard halls. Many of the studio's developers still have a fond remembrance of the Vikings and provided some of their memories to Shacknews.

"Maybe I latched onto this imagery because it was part of my natural trajectory to become an animator, but my favorite part of playing the original Lost Vikings was Erik’s little puff of air that he would let out when he stopped running. Something about that little character moment made the game so tangible to me – Sprinting so fast through the levels that my character could feel winded under my control. A simple delight."
-Lana Bachynski, Associate Animator

"I was so young back when Lost Vikings was popular, so I don’t even remember the details of the game clearly. What I do remember is that I didn’t own a PC back then, and I also remember specifically going to a friend’s house to play it often. Then I grew up playing Starcraft in pc rooms as that’s what most people did in my country and over time developed the belief that Blizzard is the best game development company in the world. Ironically, it was when I finally joined Blizzard as a designer and got a tour of our museum that I realized Lost Vikingswas also a Blizzard game."
-David Kim, Senior Game Designer

"The Lost Vikings was one of the first platformer games my friends and I rented on the SNES (back when you could rent games from brick and mortar stores). Since it was only 2 player and we had 3 people, we’d switch controllers when we switched characters. I was Olaf, my friend Kyle was Baleog, and my brother Harold was Erik. I don’t think we ever finished the game though, so maybe we’ll have to go find a copy the next time we’re all hanging out."
-Paul Tessmann, Associate Technical Director

"I was about 8 and not yet good at reading when I first played The Lost Vikings. It took me a week to figure out how to pass the first level. The fact that I could control more than one Viking was a ground-breaking revelation. Discovering every Viking's unique mechanic was magical and challenging for me at that age. I mainly remember flashes of "oh cool!" moments around those unique mechanics which made impassable levels solvable through the Vikings' teamwork."
-Yuval Greenfield, Senior Software Engineer

"I'll never forget the scene at the end of the game where the Vikings return home and use their advanced knowledge of alien technology to hold a concert for their Nordic friends."
-Robin Khamsi, Machinima Artist

"I loved Lost Vikings growing up! It was one of the first games I ever experienced on PC and I was captivated by Samwise’s sprites. Using the Vikings with each of their special skills really struck a chord. There was so much character in those guys. Their expressions, the way their portraits turned into skeletons when they died. Fond memories. I still have my 3.5 inch floppy start up disk displayed on my desk next to my geek trophies."
-Andrew Kinabrew, 3D Artist

Finally, there's Blizzard Senior Art Director Samwise Didier. If there was anyone that was championing the Lost Vikings' inclusion to Heroes of the Storm, it was him. He even told Shacknews as much back during BlizzCon 2013. That's because The Lost Vikings is how Didier started his long tenure with Blizzard.

"The Lost Vikings were the first characters I helped develop when I started working at Blizzard 23 years ago," Didier said. "Having what I consider 'Blizzards first heroes' join the ranks of such notable characters like Kerrigan, Thrall and Diablo is a great accomplishment to the impact they had with our community and on the history of Blizzards games. Skål!”

Hearthstone interview: Forged at the Barrens, the Core set, and Classic