Despite my longtime love of the Battlefield franchise, EA’s and Visceral Games’ Battlefield Hardline has been a bit of a tough sell for me. I had an ok time playing the public multiplayer beta that was held shortly after Hardline’s announcement back in June of 2014, but once the whole cops vs. criminals novelty wore off, the small offering of maps and modes made it feel like I was basically playing an urban crime themed Battlefield 4. Still, I could see that the game had potential. Now that I’ve spent some time playing the more recent open beta, here's how well Hardline is shaping up.

The Thrill of the Chase

One of the most notable changes from last year’s beta is the addition of the all-new Hotwire mode. Hotwire plays similarly to Conquest mode, with two teams of players vying for control of control points spread across a map. Only, in Hotwire’s case, the control points are drivable high-speed vehicles. Mobile control points makes every Hotwire match feel tense and frantic, as teams race to secure and defend the designated control point vehicles. Since the vehicles have to be constantly driven at maximum speeds in order to remain captured, epic high-speed shootouts are a frequent occurrence, and solid driving skills are more valuable than even the most impressive K/D ratio.

I instantly fell in love with Hotwire. Not only because of its unique premise, but also because of its accessibility. One of the main reasons I’ve always enjoyed the multiplayer offerings of the Battlefield series is because there are plenty of other ways players can contribute (capturing objectives, deploying ammo/health packs, repairing vehicles, etc.) and still earn experience points and unlocks. Hotwire builds upon that principle by allowing players to earn points through driving a vehicle around the map, or by helping to destroy the enemy team’s vehicles.

After a few Hotwire matches, I decided to give Hacker mode (Hardline’s version of the Commander mode) a try. In Hacker mode, you don’t have to participate in the gun-fighting action. Instead, you can support your team from on high, using a bird’s-eye view of the map and several different “sub-routines”. These sub-routines include actions such as GPS Spotting, which lets teammates to see enemies on their maps; Trojan Virus Uploads allow you to hack cameras to find enemies other map-based objectives; lastly, Shutdown Protocols temporarily thwarts the opposing team’s efforts to capture a base.

Unlike the small number of actions available to Commanders in Battlefield 4, Hackers in Hardline almost always have at least one or two options available. Also, the number of actions available to a Hacker isn’t tied to the number of control points the team controls. Hackers can also glance at a real-time feed of the battle at anytime, allowing them to predict the movements of both enemies and allies. Hacker mode is most exciting when there is an opposing Hacker to deal with, since it creates a tense sort of “mini-battle," as we raced to hack and counter-hack each other’s moves, all while our allies waged war using bullets.

Hacker mode is a major step up from the Commander mode from Battlefield 4. Since many Hacker actions earn you experience points and money, it is also yet another excellent option for players who want a fun, no-pressure way to contribute and level up their profiles without having to throw themselves directly into the competitive fires.

In addition to Hotwire, the beta has two other modes available for play: Heist (which was also in last year’s beta) and Conquest. Conquest works in pretty much the exact same way in other Battlefield games: two teams must secure various objectives around a map and score kills in order to drain the other team’s reserve of respawn tickets. As epic as massive 64-player battles can be, Hardline’s Conquest mode has some of the same problems as other Battlefield games. More often than not, one team ends up gaining a sizable lead early on and the other team spends the rest of the match trying in vain to catch up. I’m sure some players enjoy these large-scale, clashes but I don’t relish the idea of spending half an hour on a match that was lost in ten minutes. 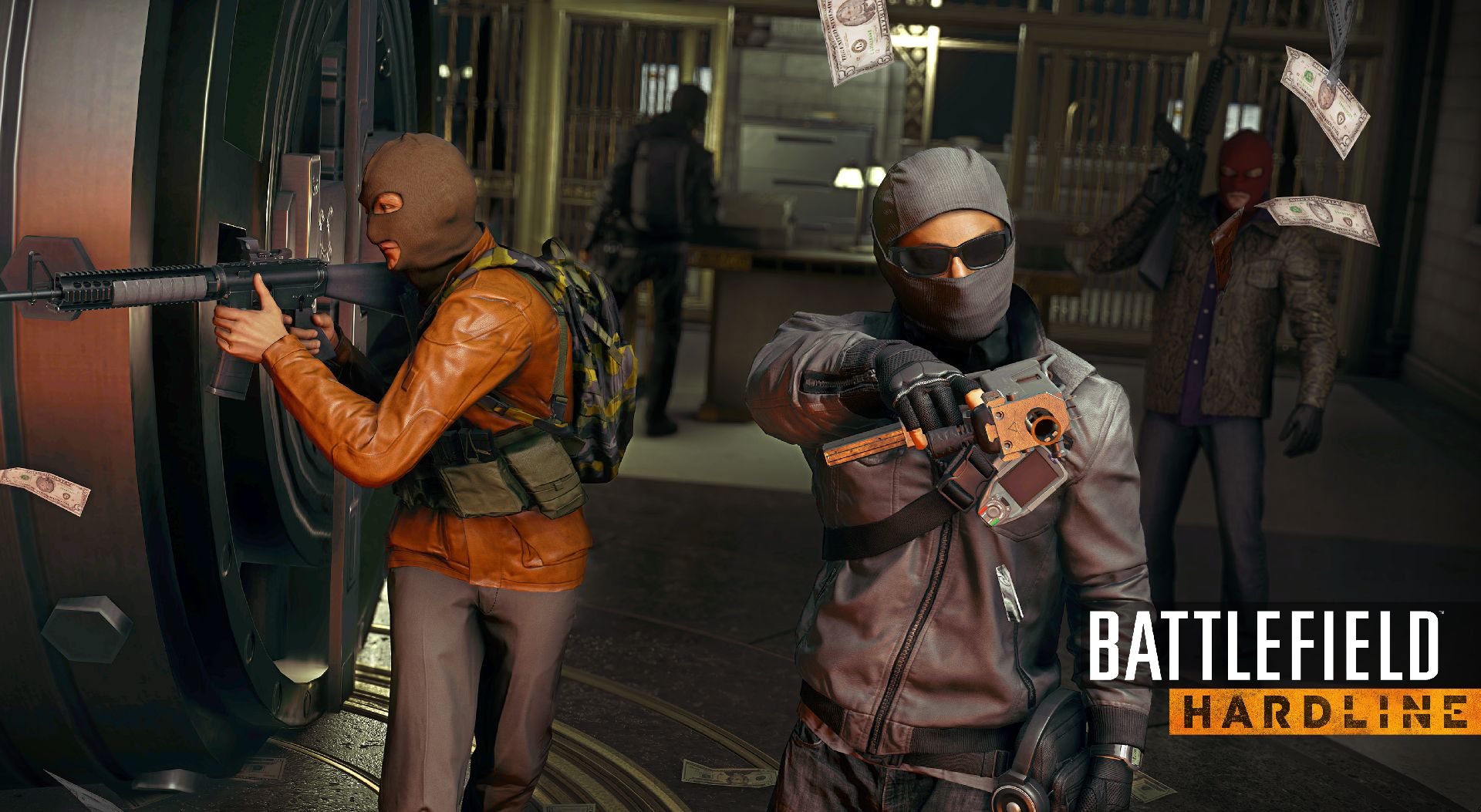 Fortunately, whereas Conquest mode is basically just more of the same, Heist mode takes an opposite approach to match progression. In Heist, the Criminals team must break into a secure location, like a bank vault, and transport the three loot bags to various extraction points while the Cops try to stop them. I enjoyed Heist mode mainly because of how quickly a given team’s strategy can change depending on who has the loot bags where. Cops start out as the aggressors, laying siege to the Criminals as they break into the vault and preventing them from getting the loot bags out. But the roles are suddenly reversed once the Criminals escape, and they have to rush to the extraction points while the Cops hunker down and defend them.

The player progression system in Hardline functions a bit differently than in past Battlefield games and it’s definitely better. In addition to earning experience points, players also earn in-game cash whenever they perform helpful actions during a match, which can in-turn be used to purchase virtually every firearm and gadget available to each of the game’s four multiplayer classes. The only things that are locked behind rank and score requirements are weapon attachments, minor class-specific bonuses, and profile customization options, meaning you don’t have to wait until you’re an extremely high rank to use your favorite gun or gadget.

Cash can also be used to purchase battlepacks which can contain anything from free attachment vouchers, new weapon/outfit camos, temporary boosts, or new melee weapons. I wouldn’t say you’ll find the same amount of customization as you might in a recent Call of Duty title, but it’s still a step in the right direction, especially since it allows players to play how they want without having to grind through a ton of ranks.

How Hardline Won Me Over

The difference between last year’s Hardline beta and this one was like night and day. The previous beta did virtually nothing to shake up the core Battlefield experience other than swap out military fatigues for cop uniforms and ski masks. This experience proves that developer Visceral Games isn’t content with letting Hardline be remembered simply as “Battlefield with cops and robbers.” After having gotten to play through the exciting new Hacker, Heist, and Hotwire modes for myself, I think it’s fair to say that my opinion has definitely changed. If Visceral can supplement Hardline’s engaging and unique multiplayer suite with an equally compelling single-player mode, then March 17 is going to be a very good day for Battlefield fans.