I went into playing Bloodborne at a New York PlayStation Preview event knowing that I would die, and that it would happen often. The game lived up to my expectations, but as with similar games, it's not about how many times you die. It's about finding ways to progress a little further when you get back up.

Bloodborne takes place in the gothic town of Y'harnam, where a plague cure is rumored to be located. Unfortunately, it looks like the plague, which mutates its hosts into beasts and monsters, has already infected all of the townsfolk. So, you have to battle your way through darkened streets using weapon-wielding skills and limited resources to find your prize. No easy task, since these crazed mutant townsfolk tend to hit hard and have a nasty tendency to gang up on you.

Before starting the game, I was presented with four choices for weapons. They included a cleaver, axe, twin blades, and a giant Kirkhammer. Each weapon determines the character's attack speed and is complimented with an off-hand ranged weapon like a blunderbuss or pistol. However, the guns are meant for defensive use, as they tend to have short range, little ammo, and deal relatively low damage. A player would generally use them to push an enemy back for breathing room or for a hasty escape, not necessarily to pick enemies off from afar. Weapons can also be changed out. For example, my gun could be switched to a torch, to light up darkened areas and set enemies on fire.

Each weapon has a secondary transformation mode, which puts away the defensive gun for an all-offensive gameplay style. Perhaps no weapon illustrates the transformation better than the Kirkhammer, which starts off as a one-handed broadsword that is inserted into a massive stone hammerhead. After playing all four, my favorite weapon ended up being the axe, since it balances well between speed and power, and transforms into a two-handed great axe. 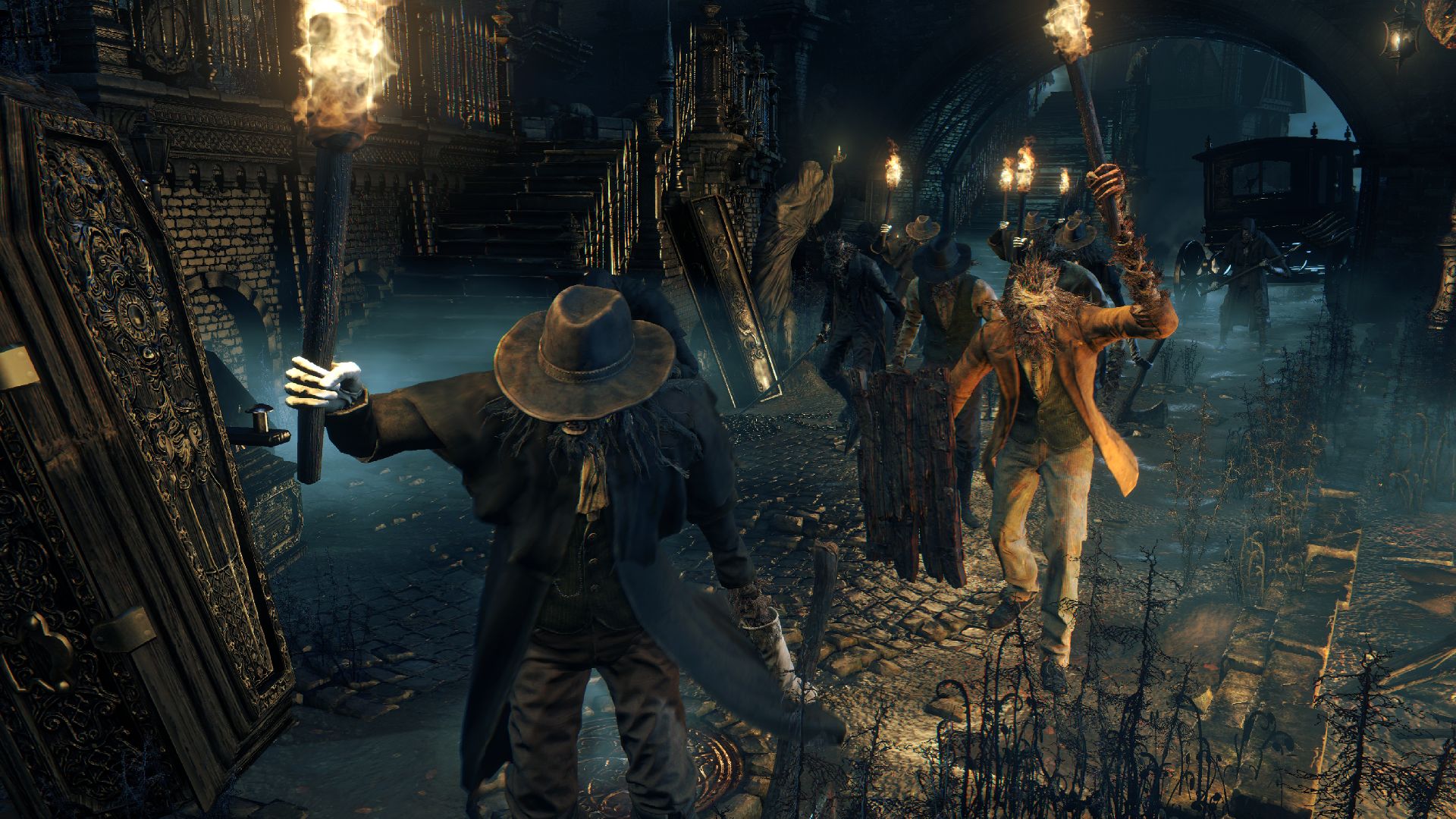 Although Bloodborne's combat is supposedly faster than its spiritual predecessor, Demons Souls, it is still a remarkably paced game. This isn't a game where dashing into large groups and mashing the attack button will get you very far. You have to know when to dodge, time your attacks, and realize when it's time to make a tactical retreat. For an added advantage, I explored the environment and found multiple approaches to some key areas. Players will also need to keep an eye out for loot, and strategize on when to use items like Molotovs, healing, and rocks to draw out enemies.

If found that the best strategy is to try to pull individual enemies away from the group and to fight them one or two at a time. In the early demo I played, I managed to find my way to a large bonfire with enemies crowded around it. Fortunately, enemies don't tend to notice a lot, so it's not a lot of trouble to throw a rock at one to catch its attention. Then I would charge my strike as it shambled towards me, and often kill things with one hit. Enemies don't call for reinforcements, at least not the ones I fought, but nearby fighting will catch their eye and they'll shamble at you in groups. Even with the long reach of transformed weapons, it's not a good idea to fight large groups in Bloodborne. It only takes a few good hits to finish you, and enemies can back you into corners and objects to lock you in there. There's also a stamina meter to be mindful of, since each dodge and attack takes a little bit away, and you may find yourself surrounded without the strength to run or fight back.

Additionally, players need to be on the lookout for enemies that hide and leap out at you from fixed locations. Going through a level once teaches you to anticipate them, but some may still sneak up on you. The fixed camera has a very limited perspective, so it's easy for creatures to sneak up behind you and get in a shot. 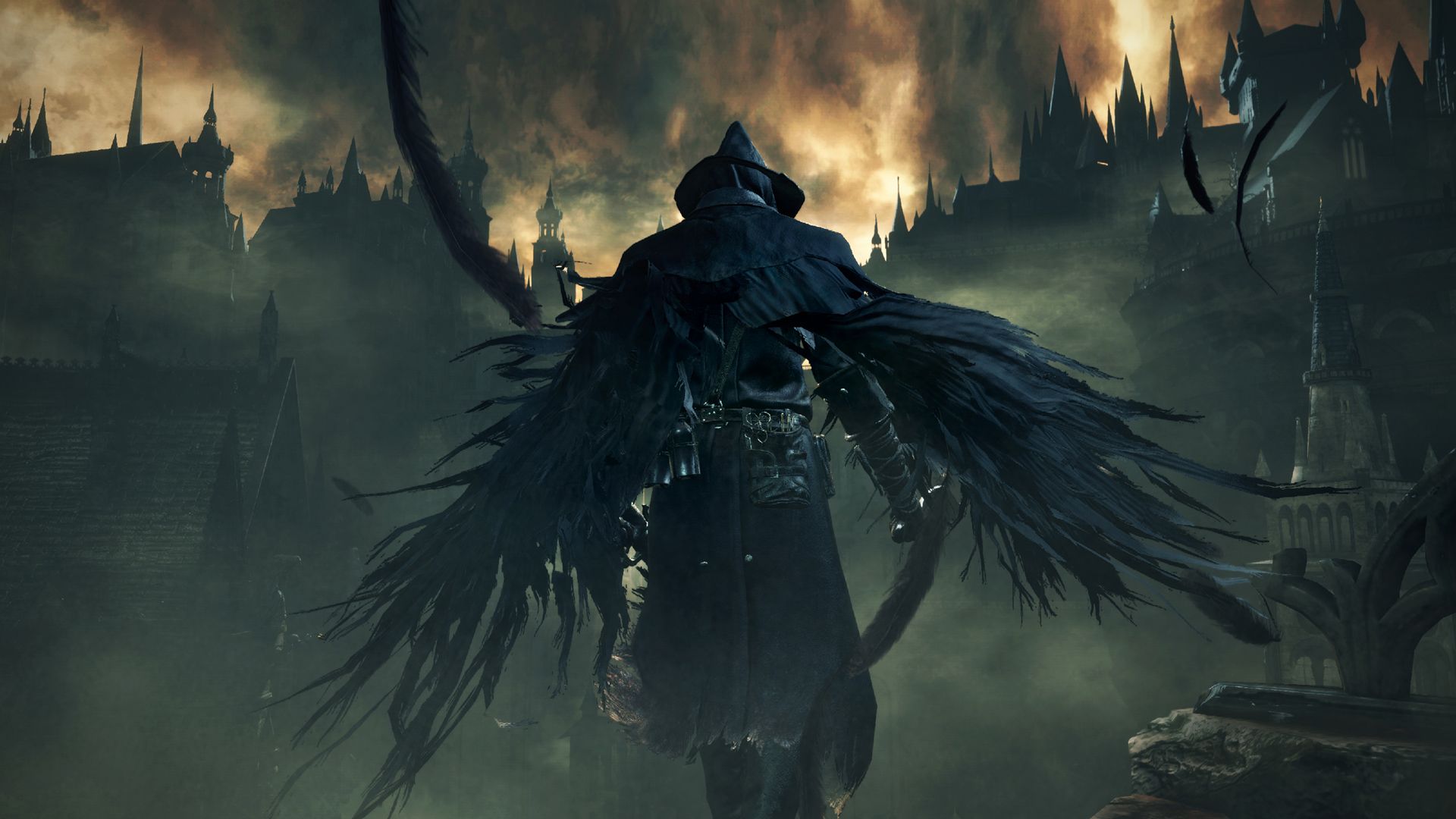 Bloodborne doesn't feature combo moves, and it takes timing to properly chain together melee strikes. Players that are used to fast-paced action games might need some time to get used to the combat system. It took me some time to remember that I always needed to lock on to enemies, otherwise my swings would mostly end up hitting air. Timing attacks and dodges also takes quite a bit of attention when there are multiple enemies nearby, especially when they wander out of view of the camera.

Despite several retries and multiple approaches, I never did manage to get past the bonfire. But by revising my strategy, I managed to thin out the crowd a little more with each retry. If given enough time, I'm certain that I would have found a way through to whatever challenge would kill me next. That's fine, because the game is all about returning and finding new ways to get a little further than you did last.

Bloodborne is scheduled to release on March 24 exclusively for the PlayStation 4.

If Age of Calamity is canon, will Breath of the Wild 2 include its splitting timeline?
Login / Register