Hearthstone: Goblins vs Gnomes class combos to look out for (part 1)

Hearthstone's Goblins vs. Gnomes expansion has been out for a little over a week. With Android owners just starting to catch up with everything, the time seems ripe to break down some of the expansion's more potent combinations. Before starting off, it should be noted that there are dozens upon dozens of lethal combinations involving GvG cards, so this will be a bit of a starter column. We'll offer up one combination to try out for each of the game's nine classes before returning next week with input from our expert players in the Chatty community.

With all that said, let's dive in! 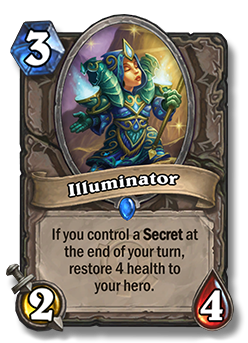 The 3-mana Illuminator is available for all classes, but it plays best with Jaina. The Illuminator's effect restores four health to any hero with a deployed Secret card, acting similarly to the Shaman's new Vitality Totem. At worst, she'll restore a whole 4 health before the opponent even has a chance to act, barring any disasters like a Hunter's Snipe Secret. That's good, because with a meager 2/4 stats, it won't stay on the board for long.

On the off chance that you can keep Illuminator alive, the best Secrets to play her with are Ice Block and Duplicate. Since Ice Block waits until fatal damage is inflicted, it will always remain active, meaning Illuminator can restore health for as long as she's alive. Some may want to consider playing Illuminator alone with a Duplicate Secret, because if the opponent decides to wipe her out, Jaina will now have two copies of her. Play two Illuminators with an already-deployed Ice Block secret to restore a quick 8 health.

Some players may opt to play Illuminator side-by-side with Mad Scientist and kamikaze the latter, but this is a risky move, since the opponent can simply target Illuminator first. If you're going to play this combination, it's best to play your Secret early before laying Illuminator down, especially if you have Kirin Tor Mage to back it up. 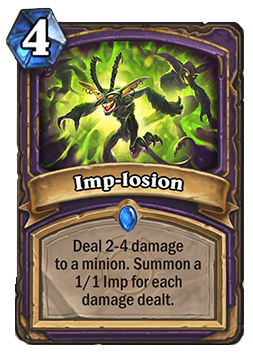 On the surface, Gul'dan's Imp-losion spell appears to be a weak play. At 4 mana, it's an expensive gambit for only 2-4 damage on an opposing minion, especially given that the 1/1 Imps that it yields are easily wiped out by almost any area of effect spell.

However, combine this play with Knife Juggler and it's downright brutal. On top of its initial spell damage, the Knife Juggler will toss a knife for each Imp summoned, for a potential extra 4 damage. This has the potential to wipe opposing boards cleaned with a little strategy and even greater luck. Also, keep in mind that even if the opposing minion has 3 health or less, if Imp-losion hits for 4 damage, it will still summon 4 Imps, along with 4 knives from Knife Juggler. It's a more-than-decent Turn 6 attack, but it'll be even better if you can manage to keep Knife Juggler alive and get Imp-losion off on Turn 4. 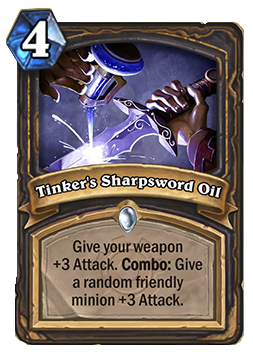 This one has a potential to get nerfed, because this combination is sickeningly good. Woe to your opponents if they have an empty field, because this Turn 10 play is a potential game changer. Assassin's Blade, at 5 mana, is already a powerful weapon in itself with 3 attack power and 4 durability. Tinker's Sharpsword Oil, at 4 mana, will buff it up another 3 attack, while also boosting another minion's attack by 3. Add in some Deadly Poison at a lowly 1 mana and there's a frightening 4 durability weapon with 8 attack power. Those that were lucky enough to draw a Coin could even add in a second Deadly Poison to buff it up to a staggering 10 attack.

That kind of attack power is enough to wipe out most Legendaries, assuming your beefed-up minion doesn't do it for you. Your opponent can try and counter with Taunt minions, but a Blade Flurry spell can simply lay waste to everything in its path on the next turn. This is almost an instant win combination and may be the latest in a series of brutally unfair Rogue tactics. 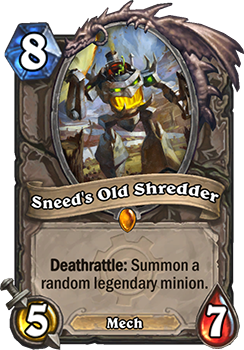 You had to know this one was coming. Ancestral Spirit and Reincarnate have already worked wonders with Stalagg and Feugen, so it's only appropriate that it work the same magic on Sneed's Old Shredder. Shaman players can either roll the dice on Turn 10 and hope Sneed's survives the next turn for a Baron Rivendere/Ancestral Spirit/Reincarnate hammer or they can simply play Reincarnate right away.

The randomness element might be a bit of a turnoff, but the possibility of rolling a Ragnaros or an Ysera may be too good for some to pass up. Shaman doesn't have a lot of inspired combinations coming out of Goblins vs. Gnomes, but this is at least a play worth considering.

That's four classes out of the way, but there are still five more to go. Come back tomorrow when we hit Paladin, Priest, Druid, Warrior, and Hunter.