The Borderlands Robo-lution: A Claptrap retrospective

"Allow me to introduce myself - I am a CL4P-TP steward bot, but my friends call me Claptrap!"
"If I sound pleased about this, it's only because my programmers made this my default tone of voice! I'm actually quite depressed!"
"Minion! Now I've got my eyesight back -- and you're far uglier than I remembered!"
"Wanna hear the new dubstep song I wrote?"

His voice is unmistakable. It's as recognizable as it is ear-piercing. These are some of the memorable quotes from the single-most memorable character to emerge from the Borderlands universe. It's the robot that everybody either loves or everybody would love to bludgeon with a blunt object. It's the CL4P-TP unit simply known as Claptrap!

So how has Claptrap gone from a supporting character to the premiere mascot for the Borderlands series? Let's take a look back at some of his appearances over the years and take the journey from a humble (yet loud) robot to the face of a video game franchise. 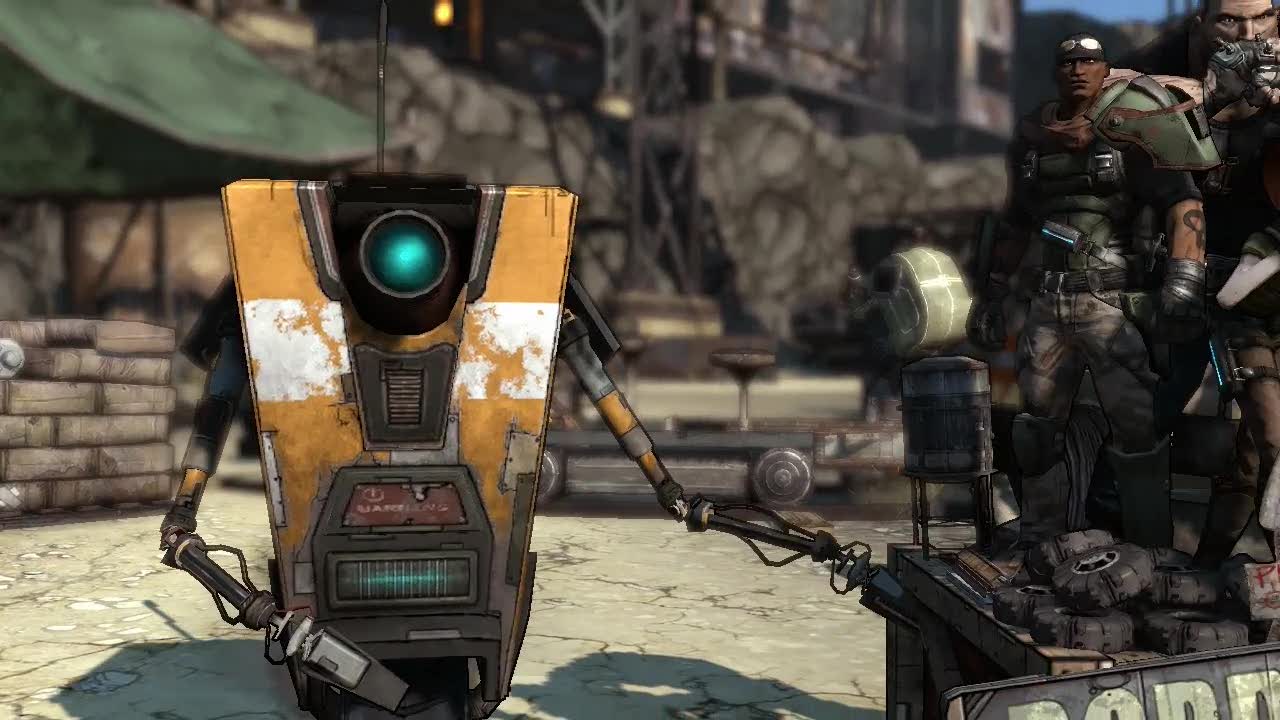 Gearbox had an affinity for their little star from the very beginning. So the studio took a risk in having an unknown character market an unproven shooter. A series of four web shorts was released in 2009, with Claptrap immediately taking a starring role in hyping up the first Borderlands game.

The result was instant magic, showing the essence of the little robot's character right out of the starting gate. 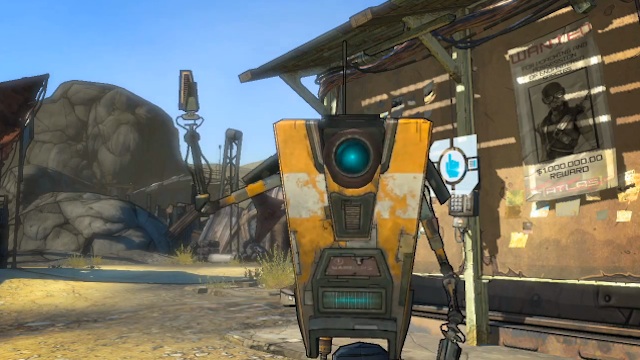 Though his web series served as a bombastic introduction, Claptrap's role in the main Borderlands game was pretty low key. The robot would greet Vault Hunters at the start of the game by introducing them to Dr. Zed. While Claptrap would get severely damaged by a bandit attack, the robot was more than happy to lend his voice to the rest of the game by offering new mission alerts.

If there's a defining characteristic for Claptrap, it's his voice. David Eddings provides the type of unique cadence that makes the robot a lovable nuisance. For Gearbox, it was important to make Claptrap an outspoken figure, one that was all too eager to go overboard with word vomit. This was the key to constructing an unforgettable character with a recognizable voice.

"It's decently important, but I don't know if we've ever really hit that sweet spot," Gearbox writer Anthony Burch said, in regards to Claptrap's unique voice. "Ultimately, if we have to choose between a character who just sort of exists and one who people have REALLY strong opinions about, we'll go with the latter every time."

While Claptrap wouldn't factor all that much into the main Borderlands narrative, he would soon have a starring role of his own, one that would cement him as a true video game fixture. 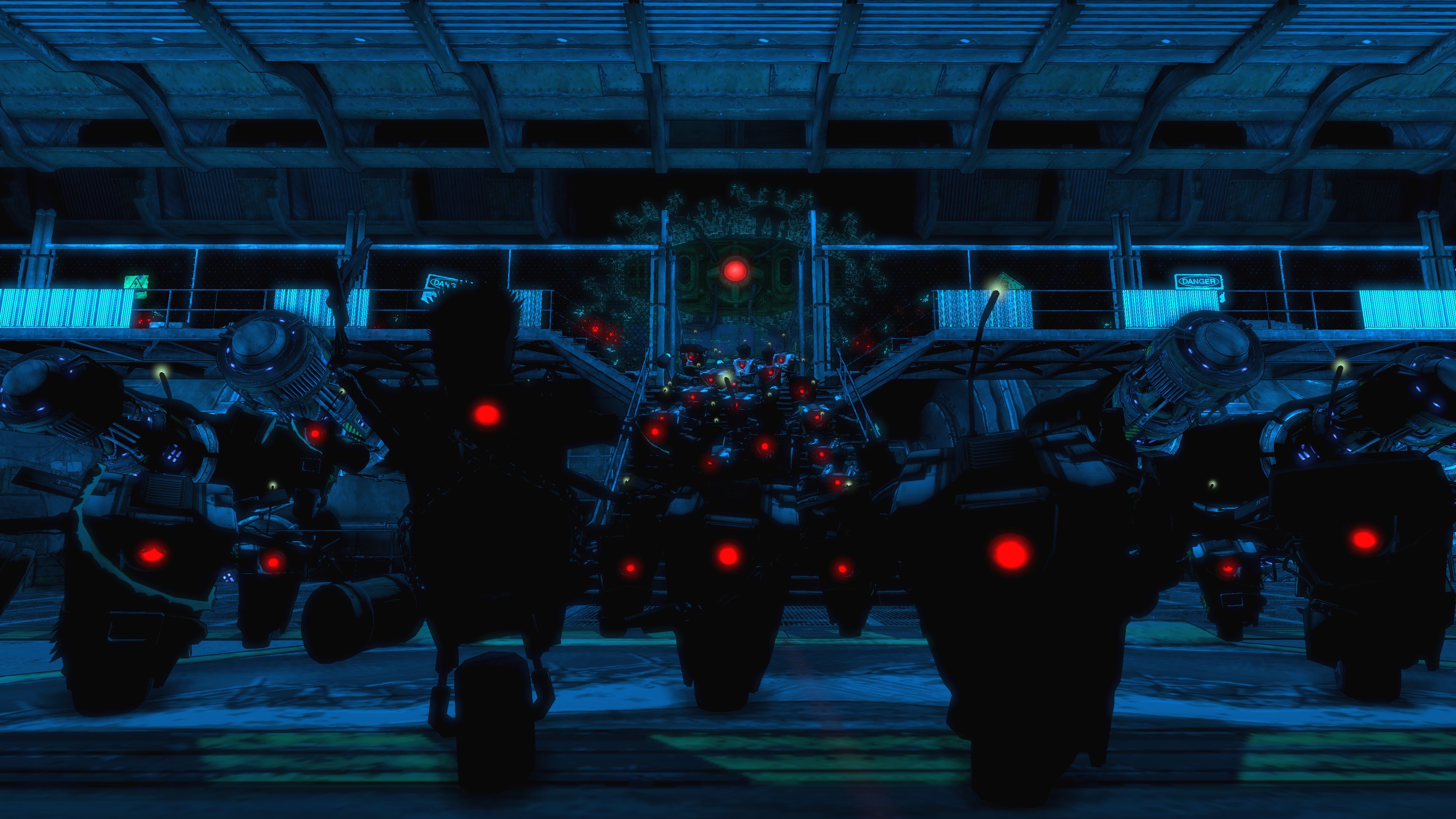 In an effort to wipe out Vault Hunters, the Hyperion Corporation recruited Claptrap (now known as Interplanetary Ninja Assassin Claptrap) to aid in their cause. After all, if anybody could rumor monger the Vault Hunters to death, it was Claptrap. Unfortunately for the evil corporation, they got more than they bargained for when Claptrap saw how his robotic brethren were being treated. Claptrap tapped into his inner Karl Marx and rallied robots of the world to unite with a single cause: the destruction of all humanity.

Claptrap's New Robot Revolution represented the little robot's first starring role, as the main villain, no less. Players would find themselves at odds with dozens of different Claptrap varieties, but it would be the outspoken bot himself that would deliver dictator-like edicts and take the lead to rid the world of humanity, offering barrefuls of laughs along the way.

Though Claptrap would be subdued at the end of the DLC and returned to his previous happy state, Claptrap's laugh-outloud lines throughout the campaign further cemented him as the breakout star of the first Borderlands game.

A sequel to Borderlands was inevitable. Part of what would go into the sequel was a slight tune-up for Claptrap. While he would still be the character we know today, Gearbox saw an opportunity to tell a new side of his story. 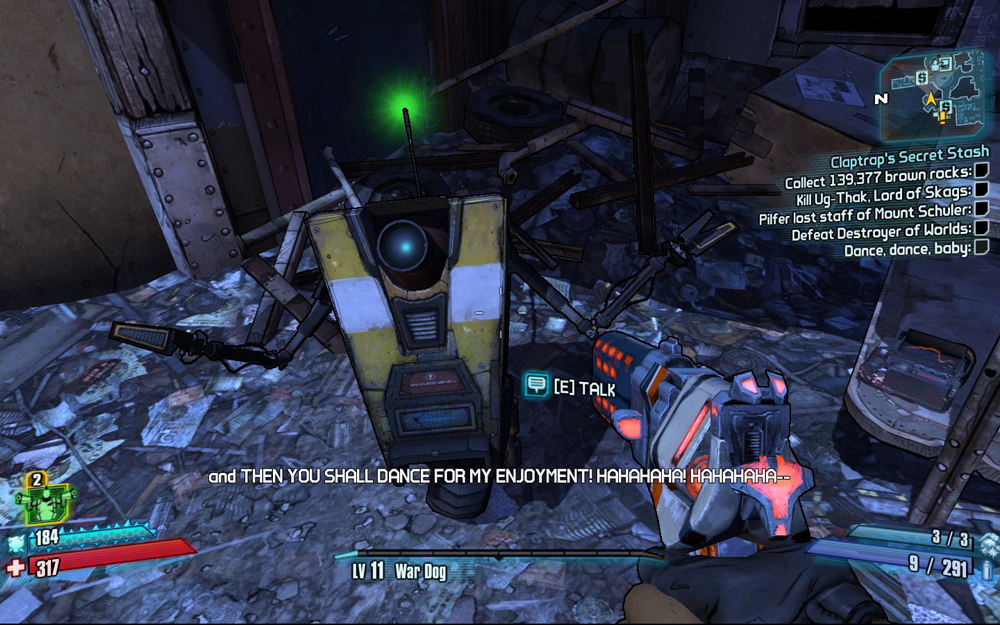 "Can't wait for Hammerlock to screw my eye back in. Me and him are thick as thieves, specifically in that I once stole his gas-powered generator because I had a crush on it. Don't judge."

Five years passed since the events of the original Borderlands and Hyperion wasn't very happy with Claptrap's attempt to destroy humanity. Handsome Jack, new Dictator of Pandora and Hyperion leader, saw to it to exterminate the entire Claptrap line, leaving only the CL4P-TP from the original game as the sole survivor.

Behind Claptrap's cheerful exterior was a deep desire for revenge, which is part of the reason he proves far more helpful to Vault Hunters in Borderlands 2. He becomes a far greater part of the overall story, helping guide players from point to point, while occasionally getting himself into some trouble. While Claptrap has some standout moments from Borderlands 2, many players will remember the key moment where the vengeance he desperately sought throughout the game was so cruelly denied by his one greatest weakness.

On this note, Claptrap clearly came into Borderlands 2 with more of a defined character arc. Gearbox saw this as an opportunity to look deeper into his personality and offer some upgrades from the first game.

"We wanted to double down on the idea of Claptrap as Charlie Brown for Borderlands 2," Burch added. "Knowing that a lot of the Borderlands fanbase found the guy irritating (including me), Creative Director Paul Hellquist and I wanted to make him more sympathetic and sad to make you, at the very least, feel kind of bad for him. Initially we'd planned to go in the opposite direction and make him really aggressive and mean (like he is in the Claptrap web shorts), but David Eddings and Randy Pitchford had us push him back into a more pathetic, eager-to-please space as a character. Ultimately, I'm fairly happy with where he ends up."

Where he ends up is as a character that seemingly has a lot of self-esteem on the outside. He also has some noticeably angsty moments, many of which are more impactful thanks to Claptrap's cheerful programming and also Gearbox's penchant for dark humor. Nowhere is that more evident than in Burch's all-time favorite Claptrap moment.

"For me, it's the birthday party quest in Borderlands 2. Claptrap invites every NPC in Sanctuary to celebrate his birthday, and nobody comes, and you just have to sort of stand there awkwardly while he tries to make the best of an awful and depressing situation. It's the exact kind of dark comedy that we really love, and it shows who Claptrap is perfectly -- he wants people to love him, but nobody does (except for MAYBE the player)." 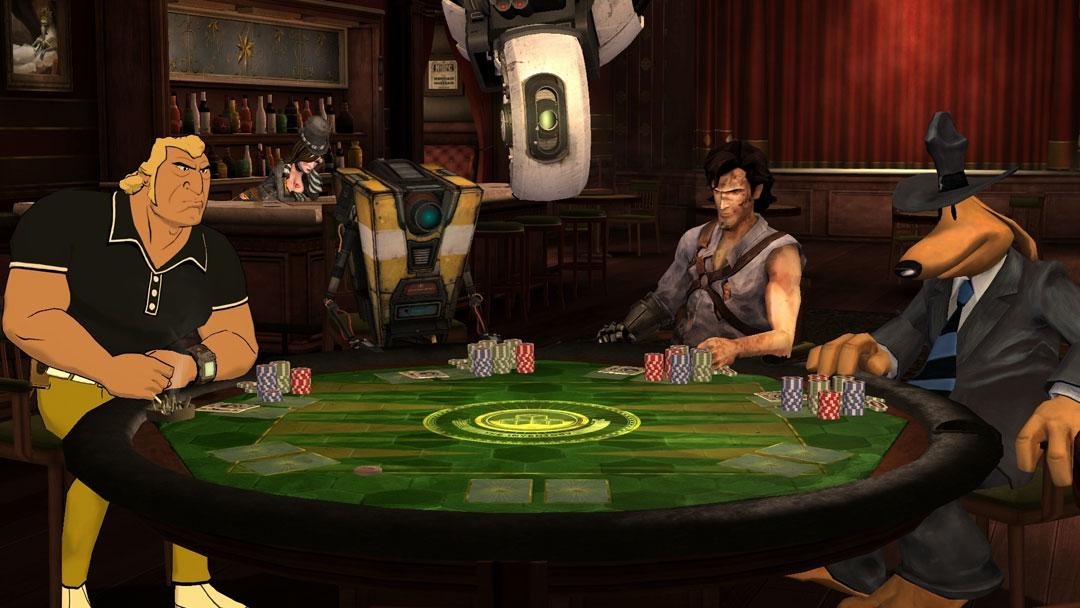 "I'm going all in... just like I was with your momma last night! Turns out she's a really good poker player!"

Following his traumatic encounter with his greatest weakness, it was time for some levity. So Claptrap headed to the Inventory for a night of cards and random anecdotes. It was surprising to see Telltale venture back into the world of Poker Night, but it was also a match made in heaven to bring Claptrap into the fold. After all, a robot built for banter is a natural for a poker game.

Burch and the rest of the Gearbox crew were ecstatic with the idea of Claptrap's inclusion and with the unlockable Borderlands table. And given the professionals on staff at Telltale, Gearbox only provided minimal input.

"We added a very small amount of lines for [Claptrap] and gave some feedback on what Telltale had done, but generally they had it all handled," Burch said.

Given a cast of characters that included Evil Dead's Ash and Venture Bros.' Brock Samson, it was hardly surprising that they regarded the little robot as a nuisance. However, the chemistry exhibited between Claptrap and the other characters was nothing short of glorious. In particular, his constant attempts to flirt with Portal's murderous robot, GLaDOS, was one of the game's major highlights. 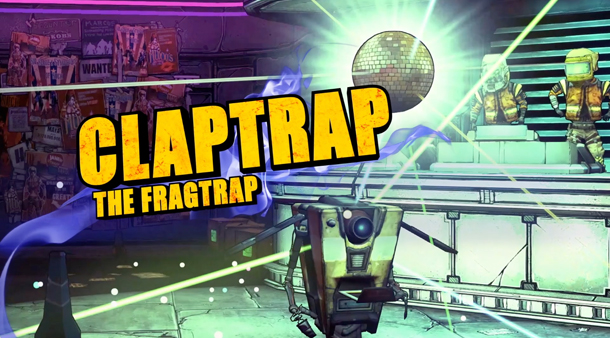 This year, Gearbox celebrated five years of the Borderlands franchise. To help commemorate this occasion, the studio had big plans for the series' mascot, making him a playable character for the first time. Could a robot that normally relied on minions to do his dirty work make an effective fighter?

"We needed a cast of characters who would logically work alongside Handsome Jack between BL1 and BL2," Burch explained. "Nisha and Wilhelm were obvious because they were BL2 bosses, and Athena came later, but Claptrap seemed like a neat idea because (A) he's a Hyperion robot, (B) he's a popular character, and (C) the idea of a worthless Claptrap being a player character was sure to turn some heads and get us some attention. It's always nice to be surprising, and a playable Claptrap was a hell of a surprise."

Of course, Burch touched on something interesting with the 'worthless' adjective. Claptrap was so often seen in Borderlands 2 either getting his can kicked, getting blown up, or as a useless sidekick. Some players, like a few of our own Chatty posters, observed that Claptrap can be particularly weak in later stages of the game. So is Claptrap as weak as he's made out to be?

"I think Claptrap's pretty damn strong in Pre-Sequel," Burch answered. "Properly kitted out, he can be pretty brutal on his own or a huge boon to his team. The idea behind Claptrap's design, as pioneered by Jonathan Hemingway and Tommy Westerman, was that his skills should reflect his personality -- he should be desperate to help others, but also slightly random and annoying. I think they did a fantastic job."

So what's next for the lovably annoying Borderlands mascot? Burch didn't answer this question, but Borderlands fans know that there's another game currently in progress. Tales From the Borderlands is only one episode in and, given its post-Borderlands 2 setting, a Claptrap cameo seems like a no-brainer. Of course, what role he would play in the story remains to be seen. But considering how quickly that cast of characters is growing, Telltale may finally give the little guy the friends/minions he's secretly desired. Maybe he could actually get people to attend his birthday party this time.

Or he could annoy the bejesus out of this crew, too.

Either way, Claptrap is one of a kind. There's no character quite like him in video games. Whatever happens to him in the future, let's hope for the opportunity to see him dance one more time.