Few things match the feeling you get when you bash down the doors of a fortress while riding atop an elephant, then using the beast to knock over cars and fling enemy soldiers around like rag dolls. Or the fun of flying through the sky in a little gyrocopter while raining down grenades on an outpost. All these things and a lot more are possible in Far Cry 4, where you play as Ajay Ghale, a person who returned to the Himalayan country of Kyrat to scatter his mother's ashes. The trip back to your homeland takes a turn for the worse when you're kidnapped by a psychotic despot named Pagan Min, then rescued by a rebel group called The Golden Path. Soon, you're fighting alongside the rebels and will leave a trail of blood, tears, and bodies in your wake.

It's a rough world out there, and it's tough to tell whether you should be thanking or cursing your mother for sending you to such a violent country, where death looms everywhere. But midway through the adventure, it becomes clear that perhaps there's no place else that you would rather be.

Kyrat is a huge country filled with dangers that go far beyond the war or the crazy dictator that's out to get you. At any moment, you could be mauled to death by a tiger, or have your recon operation ruined by a sudden eagle attack. It's no wonder so many of these creatures are on the endangered species list, they all attack with little or no provocation. On those rare occasions when you're not worried about being eaten by the local wildlife, you have to keep an eye out for the imperial army that patrols the lands. There's a ton to do, even if you don't bother with the campaign story or side missions. Exploring the country and discovering its secrets can take hours, given how much verticality there is, so expect to do a lot of rock climbing and rappelling to get across the mountains and cliffs. Unfortunately, that also means a lot of time spent staring at rock faces. Alternatively, you could dress up in a wing suit or hop into a gyrocopter to get a bird's eye view of the country. Getting up high and looking out gives the sense that the country goes on forever.

The game has a ton of fantastic detail, some more subtle than others. For example, I love how I landed a gyrocopter outside of a house, and as I was being shown out, I could see it parked outside during a cut scene. I also enjoyed the fact that as you transition from southern Kyrat to the northern region, the music and soldiers change from Indian to Chinese. These little details truly breathe life into the fact that Kyrat is situated between the two countries, and that you're inhabiting a persistent world.

Characters are also multilayered and interesting. Pagan Min's chief interrogator does the job of torture because he loves the job and because it pays to support his family. Even Pagan himself has more going for him than being a crazed amoral lunatic by chiming in on your radio every so often to tell you that the rise to the top is one that's soaked in blood. Even your mother, who is only shown in the game as an urn full of ashes, had her motives for sending you back to war-torn Kyrat as her dying wish. As it turns out, fighting for The Golden Path isn't a straightforward proposition. The rebellion is split between two potential leaders. Sabal knew and deeply respected your father. He's a populist, a true believer of the land's religious teachings, and wants to restore Kyrat's traditional roots. Amit, on the other hand, wants to cast tradition aside and wants to bring Kyrat into the 21st century. She's smart and calculating, almost cold with some of her planning, as she has a pretty cavalier attitude toward sacrificing fighters for valuable information. Either would make excellent leaders of the rebellion, except that Sabal doesn't seem to have much of a plan for post-war Kyrat outside of trying to restore the past and possibly turning the government into a theocracy. With all of the land's natural resources plundered, Amit dreams of turning Kyrat into a narco state where heroine exports help pay for schools and hospitals. Ultimately, neither one would be much different from Pagan Min, except perhaps being a little less sadistic and crazy, but the future of Kyrat will rest firmly on your shoulders. There's only one save slot, so you'll have to live with whatever decisions you make. One thing is for certain, though. The future will be built atop a huge pile of bodies, mostly by your hand.

Then there is the long list of side missions and activities. Taking over outposts, fortresses, and radio broadcast towers reduces Pagan's influence over the area. Not to mention some of the trippy missions that include missions that are played through in a drug-induced haze or Shangri-La quests that take you into a mythical dream-like world of the country's religion.

However, don't let the open world gameplay fool you. Several missions require a large degree of stealth, and more than a few take away your equipment, which might not fit well with those that prefer to blast everything in sight. One particularly frustrating mission involved sneaking into a base to kidnap one of Pagan's lieutenants without setting off the alarm. Not only are you robbed of the choice to kill or kidnap him, but you have to carry his unconscious body out with you, but with the alarm requirement removed, which is just as well, since you can't make it two steps outside of his bunkhouse without it going off for no reason. Suddenly, everyone is on alert and searching for a body snatching stranger.

Fighting a revolution isn't a solo job; at least, it's not supposed to be. I was not able to try out Far Cry 4's cooperative multiplayer, but the feature is supposed to be supplemented by a Hired Gun Token. Aiding rebel forces during skirmishes can earn you a token, or you can buy them from a trading post. When cashed in, gets you a companion that will fight by your side. I was only able to get the token to work once during my many hours of play. Twice if you count the time a hired gun appeared from out of nowhere, without my calling her, to assist me. More often than not, I would request backup and the voice on the radio would reply, "There's no one around to help you," or "you're on your own." Other than the story missions, where you can't cash in a token, the game did not provide me with any reason why aid wasn't showing up. Therefore, I was forced take over outposts and fortresses almost single-handedly. The enemy's reinforcements never have any problems showing up, which made me completely question the overall dedication to the rebel cause. I suppose it's just as well, considering how these companions don't tend to last very long once the shooting starts. They have a tendency to go charging face first toward gunfire while I'm busy trying to get back into stealth. 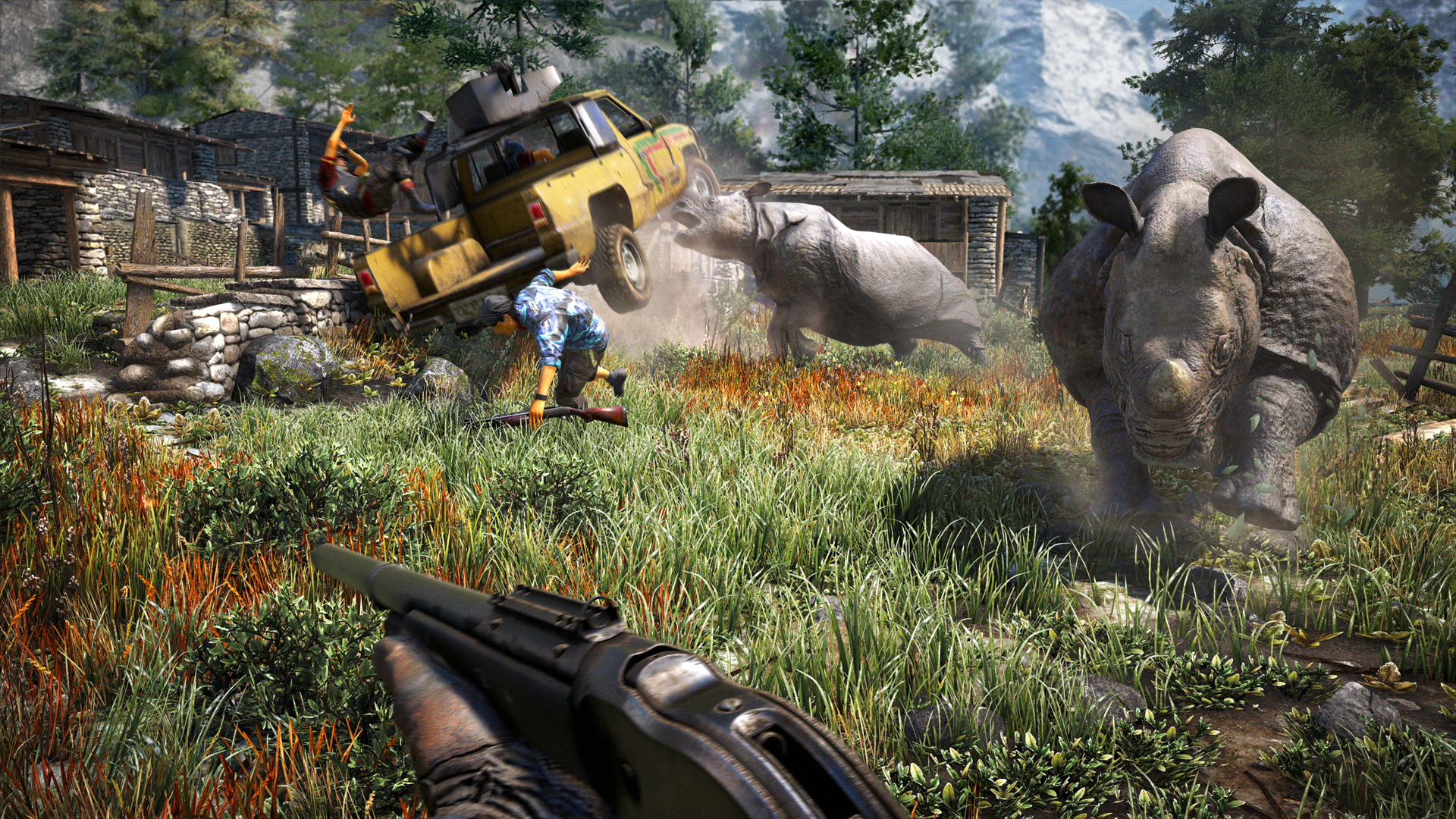 Far Cry 4's AI is generally very good. Animals will unexpectedly ambush anyone that's nearby, which can be painful when you're trying to get away from soldiers only to be taken down by a pack of wild dogs. Soldiers will seek cover, do some light investigation when they discover a body, and sound the alarm as soon as you're discovered. They'll also spread out and try to flank you when they can. However, they're not TOO smart, since one strategy includes hiding behind cover or by a doorway and using your knife execution on soldiers as they walk through one at a time.

One great moment happened when I decided to pull over and help a couple of rebels repair their car. An enemy truck came barreling down the road and ran one of them over, so I immediately hopped into a car to go after it. To my surprise, the dead rebel's companion jumped into the driver's seat and we both chased the truck down. It was a surprising and spontaneous moment that is not altogether unusual in Far Cry.

Combat can be enhanced through the use of different syringes, and you get stuck with so many needles in this game that your nickname should be pin cushion. These injections, which can be crafted by harvesting different types of plants, provide you with various abilities. One mark all targets in an area and lets you see them through walls. Another toughens you up against attacks, while the last one makes you fast enough to dodge a bullet or two. However, accessing these syringes during the heat of battle or an angry bear attack can be a real chore. The action doesn't stop while you're busy searching through circular menus, and syringes are located in an inventory submenu. There doesn't appear to be any way to map frequently used syringes to the cross-pad, which is too bad, since one of them could have taken the place of my Hired Gun token. Driving can be a bit of a chore, especially with the ATVs that tend to slide around, but the handy autodrive feature helps so long you're sticking to the main roads. As sort of proof of how difficult it can be to maneuver vehicles over winding mountain roads, even the AI driver has a tendency to run over pedestrians.

The Dual Shock 4's touchpad can be used to quickly access the weapon wheel, but I found this feature to be more annoying than useful. The touchpad is far too sensitive, and will bring up the wheel when I accidentally brush against it. Furthermore, it doesn't reliably change my weapon even when I try using it on purpose. It's a nice try at using a new-generation console feature, but it's one that I ended up turning off.

I loved getting lost in Kyrat, despite its numerous and persistent dangers. There are times when the controls feel a little clumsy during combat, and it can be discouraging when you're attacked by a wandering bear just as you're settling into a sniper position. Although the stealth missions can be annoying--as is the fact that cut scenes can't be skipped and how there's only one save slot for the campaign--I can see myself returning to Kyrat despite its faults. There's so much to explore, and the world has so much detail that it's hard not to be drawn back.

This review is based on a PlayStation 4 release provided by the publisher. Far Cry 4 is available now in retail stores and digitally for $59.99. The game is rated M.