Conquest and expansion may be at the heart of many 4X strategy games, but diplomacy can be the spirit. The universe is a dangerous place, after all, and sometimes it's good to have a few friends on your side. That is especially true of the Galactic Civilization series. Today, the Galactic Civilizations III Early Access receives an update (referred to as beta 2) which adds new diplomacy options, adding more dimensions to an ever-growing game. I spoke recently to Paul Boyer, Lead Designer of Galactic Civilizations 3, to discuss interstellar diplomatic relations.

What sets GalCiv3's diplomacy system apart from other strategy game is the depth and options available to players. Although beta 2 will feel a little bare bones, and the AI can pretty much be taken for every credit it's worth, it should provide a taste of things to come. Diplomacy can build up toward a cultural victory, but there's often a long way to go between the initial introductions and forming alliances. Trade routes need to be established and protected. Winning elections and sitting at the head of the United Planets couldn't hurt either, and serves as an indicator of your political status in the galaxy. Whether you get there by influence, or by having the biggest empire and standing army, is completely up to you.

Whereas in previous games, United Planets members would vote in their own self interest, they now act according to how they feel about you. Players can be elected as chair being of United Planets for four turns. From that seat of power, you can make large scale proposals that impact the entire galaxy. For example, if you can gather enough votes, you can propose to stop all wars. Or you can be more self serving and cripple rivals and improve your own situation. To this end, you could issue heavy taxes on the wealthiest races to slow their growth. In more extreme cases, you can make military technologies cost more, or issue an embargo against a faction to destroy its trade economy. However, one can never tell how popular such a decision will be, since races can become quite reliant on each other.

Boyer admits that the diplomacy system won't do much for small games that involve a handful of factions fighting over a very limited space. However, they can be very beneficial when building an empire across large galaxies. In addition to economic goods, players can trade strategic resources like durantium to build ships. Abstract resources like research points can also be traded. New features include the ability to trade technologies that are uniquely race-specific. Technology that might usually be considered an anathema, like slave pits, can be purchased and used. However, race-specific technologies cannot be further researched and improved. Players will have to trade in order to get the next level. 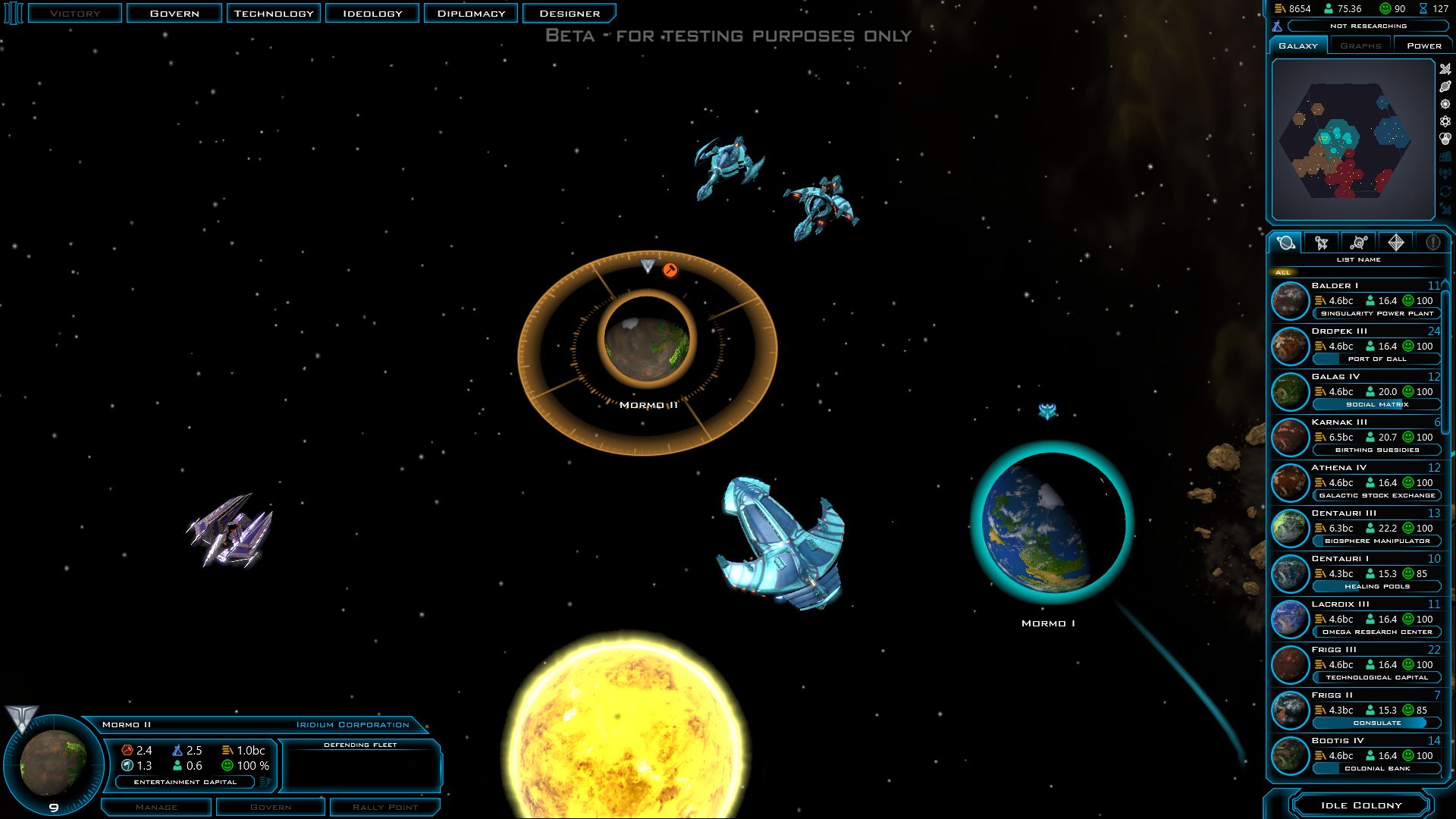 Also included with the beta 2 patch is a race called the Krynn, which were part of GalCiv2. The Krynn is a coalition of different species, brought together through religious ideology. However, hard times have befallen the faction, and it has adjusted by embracing some of the darker elements allowed by their beliefs. This means branching out into organized crime and setting up different rackets across the galaxy. These practices include war profiteering and setting up smuggling routes, but the Krynn's specialty is in gaining influence, which makes the diplomacy update the perfect opportunity for their introduction. What helps set GalCiv3 apart from other games is how factional traits can be seen in their technology and buildings. Instead of having specific improvements that gain either approval or influence, the Krynn have technologies that net them both at once, in addition to structures that are set up to pretty much extort its neighbors.

The game's use of 64-bit processing allows for every faction to have its own processing thread. But where the game benefits the most fro all that processing power is in scope and scale. Beta 2 brings in Huge maps, which are about the size of Gigantic maps in GalCiv2. Two even larger map sizes are currently in development and testing, currently referred to as Excessive and Insane (Insane is about a half-million tiles). These are for massive games that can be played out over weeks, perhaps months. The goal for the GalCiv3's final release is to have up to 100 factions in a galaxy at once, all exploring, building, negotiating, and fighting. Eventually, the galaxy will be so big that civilizations will rise and fall, and players may have no knowledge of them. All of it needs its own processing thread and memory space. Boyer imagines empires allying together, growing, expanding, becoming huge, then exploding as it all falls apart, with the last two survivors eventually meeting and confronting each other.

Galactic Civilizations 3 is available through Early Access now, and requires a PC running 64-bit Windows. The beta 2 patch, which introduces diplomacy and the Krynn, goes live today. The full changelog can be found here. Although it currently features only five races, the Early Access provides a teaser for the big things to come.

What would MultiVersus look like with a Smash Ultimate-sized roster?
Login / Register