Every year, IndieCade celebrates the best in independent gaming across a variety of platforms. Many of those platforms are traditional, but recent years have seen indie developers take advantage of some emerging trends. In particular, they've been embracing the virtual reality technology put forth by the Oculus Rift VR headset.

This year's IndieCade say Oculus bring their headset back for passersby to try out, however there were also a couple of finalists that took advantage of the tech, as well. 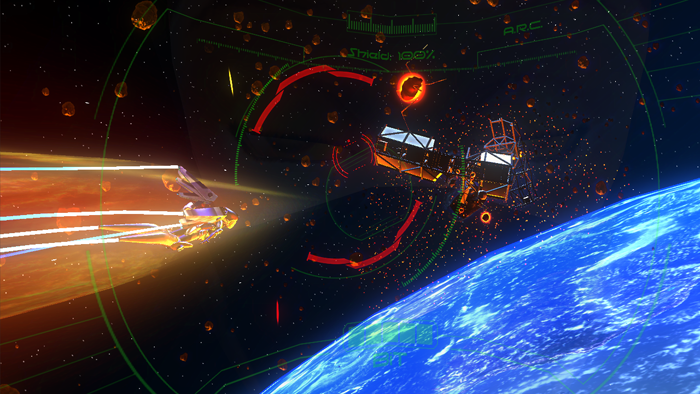 For this year's IndieCade, official Oculus Rift demos were held inside a dedicated trailer. After waiting in a short line, I had the opportunity to try out Vanguard V, a passion project from developer Zero Transform.

Vanguard V is an on-rails space shooter, in the vein of Star Fox, that follows main heroine Qu in her quest to rid the galaxy of a race of parasites. Instead of using controllers to move around and shoot at targets, the game is solely controlled by the Oculus Rift headset. Tilting your head will automatically target enemies in your line of sight, as well as move Qu around. The idea is to avoid shots from enemies, as well as fly out of the path of asteroids and other obstacles.

The stage I played through captured the beauty of outer space, along with a tinge of a distant sunrise. The environments are gorgeous and the enemies, backgrounds, and asteroids are rendered with amazing detail. There's nothing groundbreaking about Vanguard V, but it's a fascinating look into what virtual reality can do with a tried-and-true genre of conventional gaming.

Vanguard V's Kickstarter campaign ultimately fell short of its goal, but Zero Transform is undaunted and is taking donations at their website. 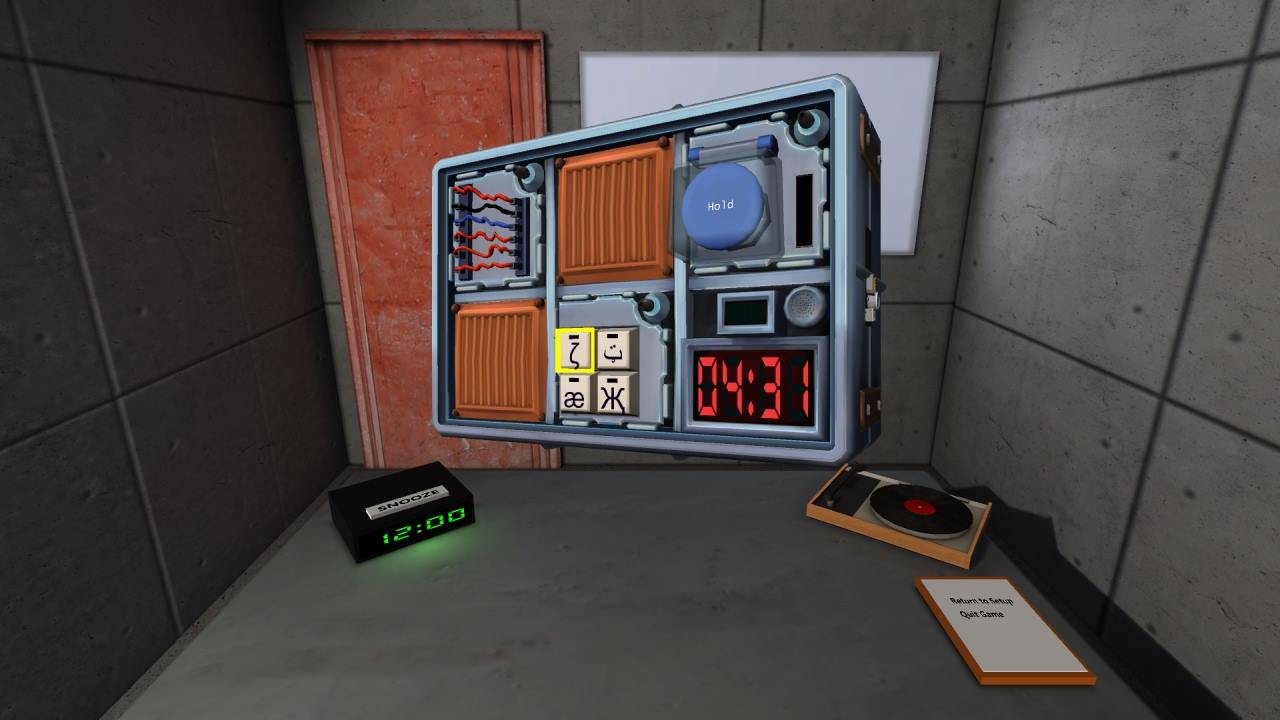 Keep Talking and Nobody Explodes

Perhaps one of the most innovative uses I've seen of the Oculus Rift headset yet, a group of developers have come together to create Keep Talking and Nobody Explodes. This is a gaming twist on a classic movie trope: defusing a bomb in a limited amount of time. And though there isn't a Mission Impossible theme in the background, it's every bit as tense as can be imagined.

One person wears the Oculus Rift and is left alone with a complicated contraption of a bomb. A partner is in the outside world with the manual of how to diffuse the bomb. The manual contains several different models of bomb and since the person in the outside world can't see the bomb, communication is required on both sides. The bomb itself contains several distinguishing features, including number and color of wires, serial number, rune-type symbols, and button design. After helping the manual holder sort out which bomb is in play, it's up to that partner and the Rift user to go back and forth and work together to diffuse the bomb, step-by-step.

It's a nerve-wracking premise. I was narrowly able to diffuse my bomb with 0.47 seconds to spare. Others will not be so lucky, but Keep Talking and Nobody Explodes is a great co-op experience and a truly unique use of the Rift. For more on this game, check out the website.

Another IndieCade finalist strays from traditional gaming and further shows the Oculus Rift as a potential learning tool. Use of Force is a documentary project that takes a look into the real-life arrest of Anastasio Hernandez Rojas. Rojas was a Mexican national living in the United States illegally as a construction worker. He was caught stealing a bottle of tequila and was deported back to Mexico. Months later, Rojas would attempt to cross the border and was caught by border patrol agents. Rojas offered no resistance, but was brutally beaten in front of dozens of eye witnesses, some of whom captured the incident on their phones.

Use of Force re-enacts this incident in cringe-inducing detail through the use of the Oculus Rift. The person wearing the Rift witnesses the brutality first-hand, but creator Nonny de la Peña goes a step further. Using a make-shift cell phone, users can hold a button to record the incident through their own eyes, offering a taste of the social media-fueled journalism that brings many of these issues to the public light. The demo lasts roughly five minutes, but the cell phone only has 60 seconds of power, meaning users must determine what footage is worth capturing and saving.

This is a moving experience and another prime example of what Oculus Rift can achieve beyond the gaming spectrum. Vangelis Lympouridis and the team at the Emblematic Group were kind enough to send the footage that I took directly from my time with Use of Force, which you can check out below. For more on Use of Force, including the full story of Anastasio Hernandez Rojas, check out the official website.