Dungeons are vast and plentiful in the latest game from the team of Playtap Games. The only way to survive is to collect hundreds of in-game cards and use them to find your way forward. That's the idea in Card Dungeon, a roguelike that mixes together card and board game mechanics with procedurally-generated dungeons.

To learn more, Shacknews spoke to artist and game designer, Fredrik Skarstedt. He's better known to Chatty as Fredrik S and he discusses the game's development cycle, as well as some of the changes its undergone and some of the feedback he's received from the Shacknews Chatty community. 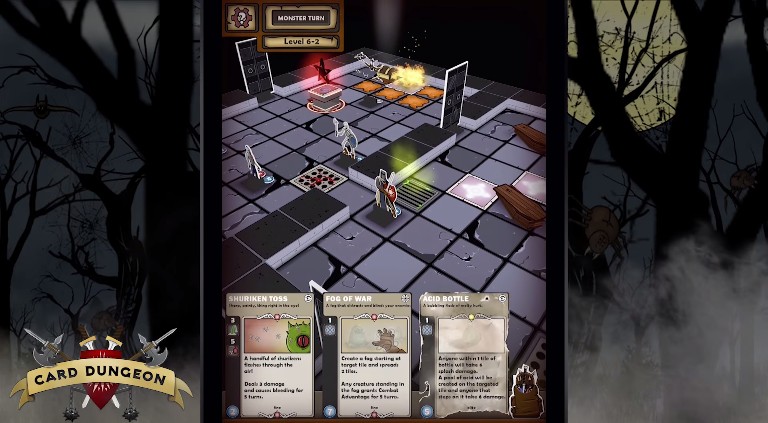 Shacknews: How would you describe Card Dungeon? What's the game about and how long was it in development?

Fredrik S: Card Dungeon has a cold, ruthless, rogue-like, heart beating at the core. We've always wanted to do a rogue-like since I am a huge fan of the genre and this is what came out. When we started developing the game, it was not far off from what you see, but the card mechanics were a little different. It started with the idea that you have a draw deck that you pull from when you use a skill. We also had minor, standard and daily skills just like Dungeons and Dragons. We ended up iterating quite a bit until we came up with the really simple formula of just having three cards on your hand at any point. It made the game really easy to get into and it feeds that "just one more room" feeling.

The simple story line is that Crusader (the player character) is coming home from... uhh... crusading and is feeling incredible remorse from what happened overseas. When Crusader then discovers that the homelands are infected with monsters from the Nethermist has overwhelmed the country, the Gods (we call them Lords) tasks Crusader with purifying the lands while purifying Crusaders soul. It's a silly story, but we hope just having the story there gives the game a feeling that there's a bigger world beyond the dungeons you murder your way through.

The inspiration from Card Dungeon came from rogue-likes, board games and collectible card games. I am a HUGE fan of board games and especially the dungeon crawlers like Descent, Heroquest and Dungeons!. I wanted to build something that simulated those games with the presentation of what I see in my head as I play those games. The pew pew and the whoosh and all that silly stuff.

When we started development I brought some figures from Descent and we were discussing having 3D models for each monster. I even went ahead and did some rough sculptures of them, but in the end we scrapped it because it would just be too time consuming (and honestly, I am not thatgood of a 3D sculpter) and went with 2D on digital card board instead. In the beginning we had these rectangular shapes with the drawings on them, but players had trouble quickly distinguishing which monster was which. This was cleared up when we went with the paper cut look because the silhouettes were much clearer and easier to read.

The tiles were inspired by the board games Mage Knight and Archipelago. When you hit the edges of the map in those games, you take a tile and put it down next to your player token. The drop down effect of the tiles in card dungeon was to represent players putting down tokens and tiles. We tried to create this effect that the game was played on a kitchen table hence the full bright look of it.

The cards were inspired by Magic the Gathering cards. We went through a few iterations of the look and feel of them, but I really wanted Card Dungeon to be playable for all ages so a cartoony look was determined so kids could play it with no problem. All the gore and blood in the game is very stylized and goofy and only lasts for a second or so. We've had kids as young as 3 play the game and there's only laughter and no scary moments, thankfully.

Shacknews: What makes Card Dungeon ideal for iOS? Would you ever consider bringing it to PC?

Fredrik S: There's really nothing in the game that makes it a game that can only be played on phones or tablets. We had never done an mobile game before and it was something we wanted to try. So there's nothing (except for a bit more extra work) to stop us from trying to get Card Dungeon on Greenlight. 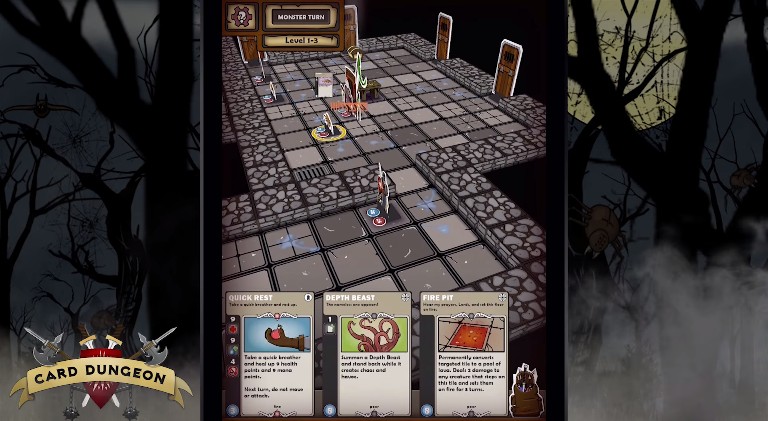 Shacknews: What are some of the different skills and cards that you can encounter over the course of the game? How do these influence your character's play style?

Fredrik S: The skills in the game are quite varied which creates for some unique opportunities and play styles to mix together. Since you can have three cards on your hand at all times and you switch them out as you find new ones, you quickly go from being melee based fighter to a range based mage to a arrow shooting legolas to a summoner to a healer in just one level. And even if you find a few skills that you try to rely on, those cards will eventually wear out and stop working, so you are constantly forcing yourself to try new combinations and new "classes."

So, the monsters skills will also influence what cards you should keep. As you play the game, and pay attention, you will learn how monsters act and what cards they will play against you. Some monsters you really want to stay away from because their melee attacks are devastating. Others you might want to get in close and deal heavy melee damage to.

Then there is of course armor and weapon cards. The armor cards can also have magical effects on them, but their basic function is to stop damage being dealt to you. When the monsters attack they target one of your body parts; head, torso, legs, feet, hands. If you have a piece of armor on one of those body parts, the damage will be reduced. Of course, these cards will degrade and break eventually if you take a lot of punishment, so you will want to replace those cards as well.

Weapons work a little different. Each weapon has a range attribute to them and work in tandem with the three skills in your hand. So if you have a sword that deals extra fire damage, it will only do that fire damage when you use a skill that is melee based (adjacent to you). If you use a ranged based skill, that weapon is useless. So balancing weapons and skills are crucial to surviving.

Finally there's the trait cards that you equip the Crusader with at the start. You get to pick a good trait and a bad trait. The good ones can be something like extra money, hit harder, more mana, more health. The bad traits are things like lazy, clumsy, hypochondriac and others. As you play the game these traits will fire off randomly and either help you or hinder you as you play. None of the negative traits are something that alter the flow or balance of the game, but it does keep things interesting. Except for hypochondriac where you get affected by a random condition every so often. It makes the game really hard.

Shacknews: How long do you imagine it would take someone to unlock all of the game's abilities and cards?

Fredrik S: Well, unlocking all the traits will not take too long if you play enough. I'd say a trait unlock drops every 2-3 rounds that you play (if you survive for any length of time). Skill, armor and weapon cards might take awhile though since there are so many of them to find. There are still weapon cards I have yet to find ever since we implemented them into the game! So yeah, there's definitely replayability there.

Shacknews: How big are the game's dungeons? Since they're all procedurally generated, what's the endgame scenario?

Fredrik S: Each dungeon is not very big since we wanted the game sessions to be bite sized and quick enough to play on the bus ride to work or school. Each level has 12 rooms and some corridors between them. I'd say you can usually completely finish a level in about 10-15 minutes depending on how fast you are and what the random monster drops are. Occasionally you'll find that the boss monsters has spawned in the second room, so those go fast of course.

Shacknews: How has Chatty received the game so far? Have the helped in the game's design in any way with their feedback?

Fredrik S: So far, so good! Every time I've posted to the chatty we've had some really nice compliments on it. I know the shacknews crew is a PC game crowd, so I haven't expected a huge thing from them, but it's always cool to see the support given to indie developers here. I've had a few people come and help us test the game awhile back which was really helpful, but I really want to give a big thanks to wtf242 and kojak2000 who did us a huge favor by testing how the game worked for color blind people. Good news was that Card Dungeon works great for those affected by severe color blindness.

Shacknews: What's next for you once Card Dungeon releases? Will you continue supporting it post-launch or will you move on to your next project?

Fredrik S: Oh yeah, we'll support it for quite awhile. I have more features that I want to implement that we didn't have time to do including vulnerabilities to certain conditions (fire, ice, etc), glowing paths to the next door, and more. We can also always make little packs of cards that we can release as updates too. I know I would like more varied armor and weapons to play with. The good thing is that we built Card Dungeon so we can just drop in new content without having to rebuild everything. As we move along with bug fixes and new content we are also looking at other platforms including Android, Windows and eventually PC. Might even try to get to the PSP Vita since Sony has opened up their platforms for indies. That would be super cool.

Those looking to give Card Dungeon a try can find it on the App Store now for $1.99.