Justice is coming, and it's apparently saving space for next summer.

WB Games has confirmed a release date for the final chapter in Rocksteady Games' Arkham series, Batman: Arkham Knight. The game will make its debut on Xbox One, PlayStation 4 and PC on June 2, 2015. And, yes, that's worldwide.

In addition, two special editions of the game have been announced, and will release on the same day.

Those of you who want to go the extra mile can invest in the Batmobile edition for $199.99, which comes with all those goods, but replaces the Batman statue with a fully transformable Batmobile statue, recreated in exquisite detail by TriForce. We've included a picture of the pack below, so you know what you're getting. 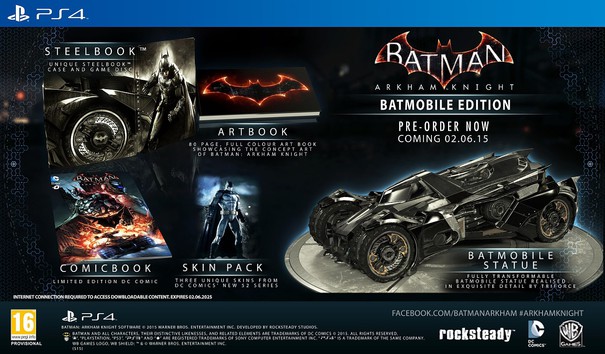 Expect more coverage on Arkham Knight in the months ahead.