It's been nearly five years since Super Meat Boy perfectly blended together the retro elements of classic platforming and masochistic difficulty. However, it's still inspiring developers to try their own takes on the genre, with Costa Rican developers Green Lava Studios creating its own diminutive hero to star in their latest game, Fenix Rage.

Fenix Rage sees the title character as the lone survivor of his village, which was at the wrong end of a big explosion. The perpetrator was the evil Oktarus, who goes on the run with Fenix in hot pursuit. The idea is to chase Oktarus across four worlds of varying environments, each with 20 levels. 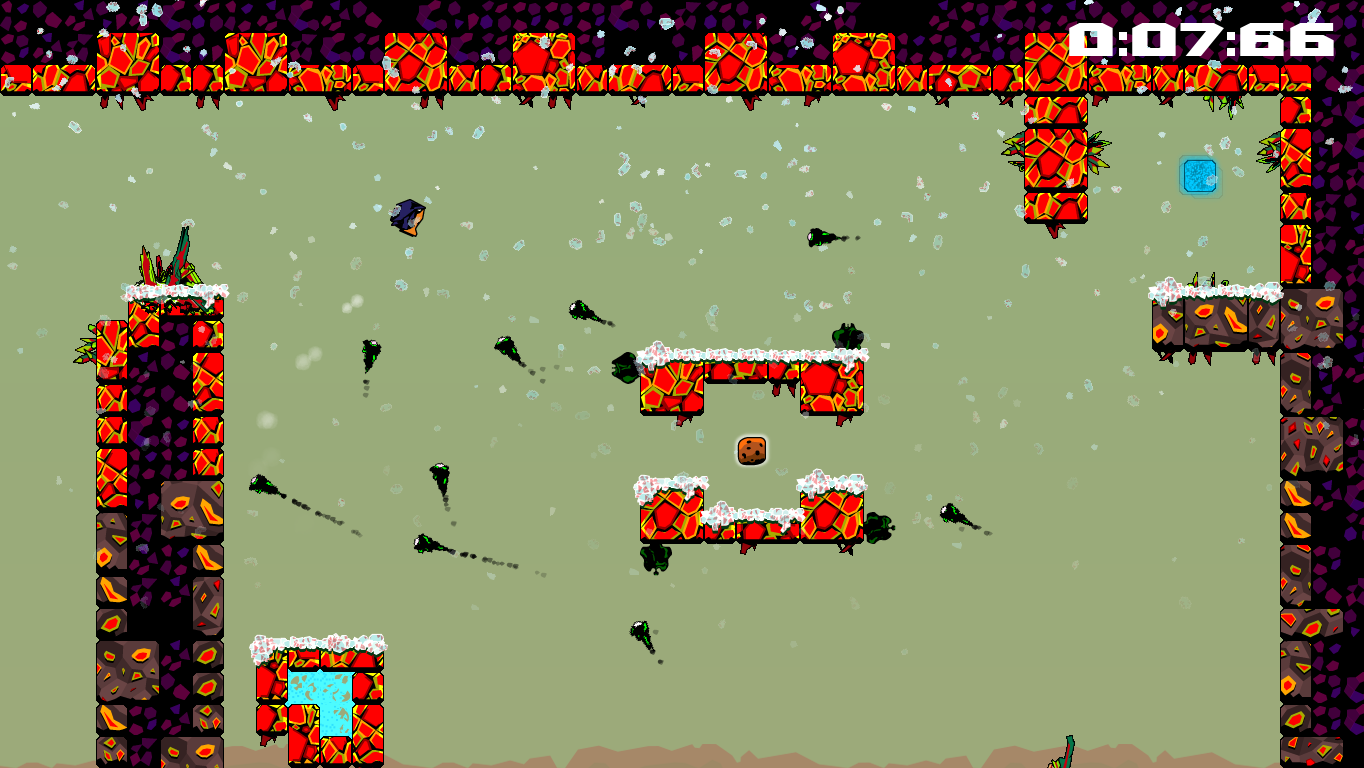 Fenix has some basic platforming moves, like jumping, wall jumping, and air dashing. Speed is key, as the idea is to finish levels as quickly as possible, with Green Lava designing this game for speed runs. As with other hardcore platformers of this type, a single hit will do Fenix in and enemies will be strategically placed across each level, requiring maximum precision with the air dash mechanic.

Stages are delightfully masochistic, with certain levels requiring some special mechanics to move ahead. For example, ice blocks can only be broken by a fiery Fenix, requiring him to slide down a lava-covered wall for a quick charge. Enemies will often get in your way, depending on their movement patterns, and boss battles can get very frustrating. However, Green Lava has made it so that respawning is instantaneous, making it much easier to try again and get that "one more!" feeling. It's hard not to get that feeling, especially during one of the lengthier World 4 levels, where I just couldn't stop trying my hand at it. The controls are friendly and intuitive enough that anyone with a sense of pride shouldn't have a problem trying one of the more difficult levels multiple times.

There's no shortage of content here, since completing the main four worlds will unlock a special dark world, which will offer harder versions of the first 80 levels. Completing that will unlock Sanctuary, the game's ninth world. Aside from the story, Fenix Rage has a couple of other unlockable modes to try. Challenge Mode requires players to complete each level with only a set number of jumps and dashes. After finishing that, players can unlock God Mode, which requires an invicible Fenix to clear out each level of all enemies before the time limit expires.

Each level also has its own set of unlockable goodies. Some levels will feature a special secondary red exit portal that will expire after a certain time. Reaching this goal in time will send players to a special 'Fenix Box' stage, allowing them to play an old prototype level. Gaining red stars in Challenge Mode will unlock arcade games, which will see Fenix using his abilities to play mini-games, such as one that tests how long Fenix can keep a soccer ball in the air. Every level also has a collectible cookie, which offers up an outside-the-box unlockable in the form of an actual cookie recipe. Indeed, collecting all of the collectible cookies in a world will reveal a real-world recipe for that world's corresponding cookie.

Fenix Rage hopes to scratch the Meat Boy itch that's been developing since Team Meat's game first released in 2010, while also providing the sense of speed that made early Sonic games so memorable. It looks to be a solid effort from the former mobile devs at Green Lava Studios. Players will have the chance to tap Fenix Rage on September 24 on PC, with Xbox One and PlayStation 4 versions set to release in 2015.

How Mortal Kombat 11: Aftermath sets up the series' future

Announcing Shacknews E4 2020 and the Summer of Doing Our Jobs