Peace, love and happiness brothers and sisters. Today marks the 45th anniversary of the Woodstock Music & Art Fair - one the nation's most historic and mythical outdoor concert events. Not only was it the largest gathering of the nation's youthful counterculture, it was a milestone in music, and it marked the end of the 60s era. If the success of Woodstock and the spirit of the 60s could be neatly summed up, it would be: Sex, drugs, and Rock 'n Roll. As we head into the weekend, here are some of games to try out and hopefully recreate some of that classic vibe.

The Summer of Love happened in 1967, but free love was still happening (quite frequently) that weekend at Woodstock. A lot of women forgot their birth control, so supplies had to be flown in via helicopter, since traffic within a five-mile radius came to a standstill, and nobody could get in or out. Here are our top picks for the theme of sex. 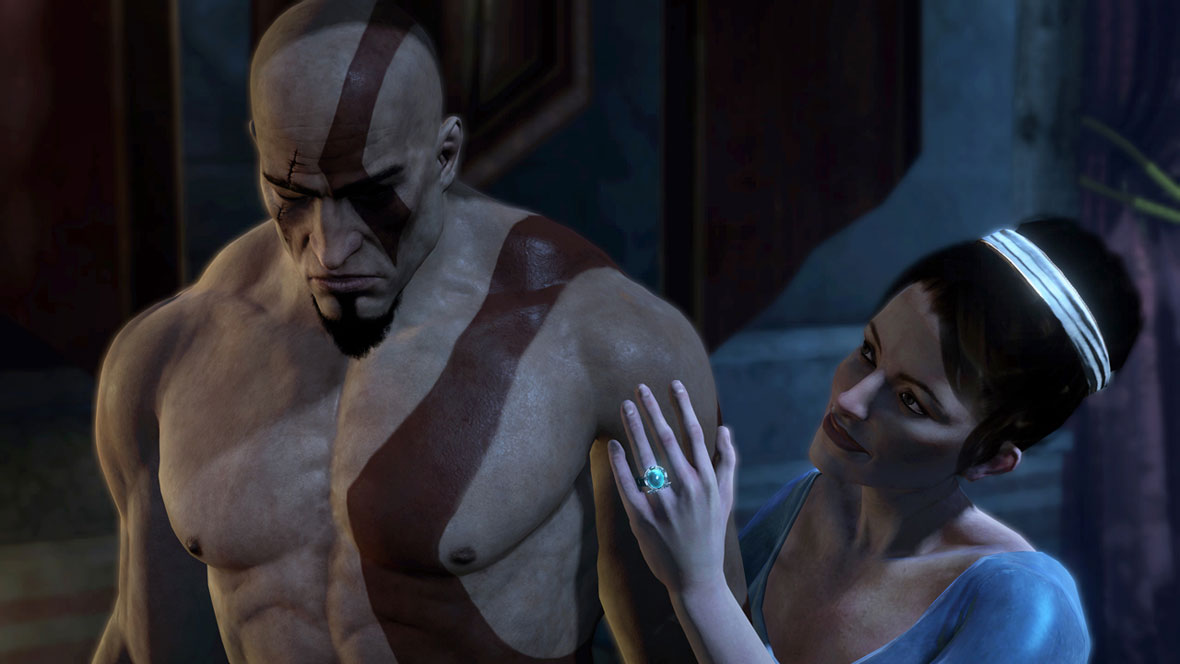 The counterculture movement was about making love, not war, which might make the God of War series an odd choice. However, we argue that there's no better way to celebrate love than actually getting in bed with the goddess of love herself, Aphrodite, which you do enthusiastically in God of War 3. In a game series that has no shortage of off-screen sexual encounters, this stands out as one of the better ones.

The theme of sex is prevalent in just about every Grand Theft Auto game since GTA 3, but our favorite happens to be the Hot Coffee mod from San Andreas. Why? Mostly because of the ridiculous controversy it stirred. In a game where you could solicit prostitutes, it was an abandoned sex mini-game that was only accessible through a hack that got it slapped with an AO rating. A perfect example of why the counterculture chose to challenge authority. 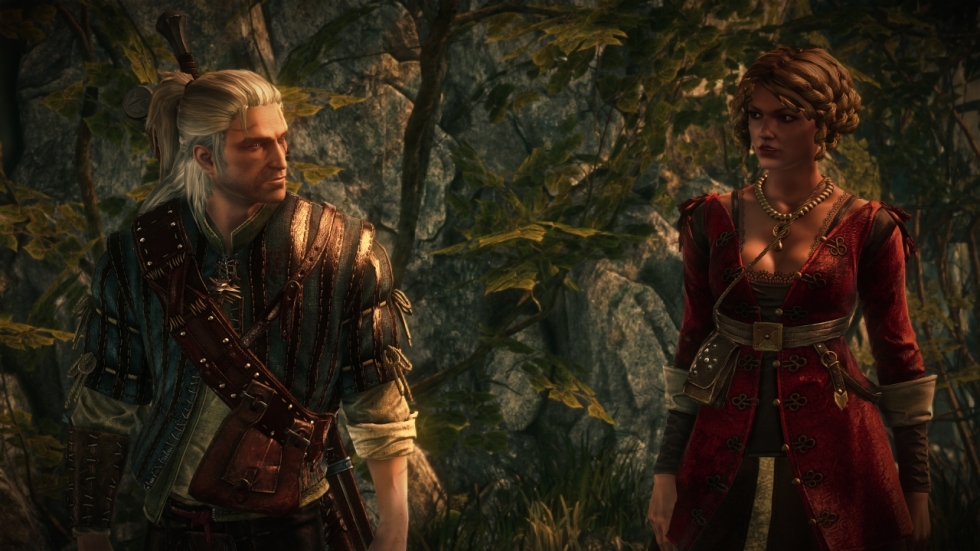 Being a mature themed RPG, The Witcher series doesn't shy away from sexual encounters. Geralt hops into bed with quite a few women when he's taking a break from monster hunting. Its handling of sex wasn't always so mature. The first Witcher rewarded players with a Romance Card for every woman Geralt bedded, which also covered up the lovemaking action. It wasn't CD Projekt's intention to turn the sex scenes into a card collecting mini-game, but the embarrassing feature was there nonetheless. However, sexual relationships are handled much better in The Witcher 2, and is best exemplified by the scene between Geralt and Triss in the Elven Bath, despite its cheesy dialogue (it sounds way better in French).

Shout outs go to Dragon Age: Origins, specifically the romance with Leliana. The group campsite is outdoors, and Leliana's talk about embracing her fate and experiencing life has a very strong hippie vibe to it. Then there's Leisure Suit Larry in the Land of the Lounge Lizards: Reloaded, which is cheating the theme in some ways, since it's about a guy with a 70s fashion sense looking for love in the 80s. However, it's difficult to find a good (non-pornographic) game that embodies the theme of sex better than one where the guy uses a horrific looking blow up doll as a transportation device to get to the girl of his dreams.

Despite having nearly half a million people crowding onto a patch of farmland, food and water shortages, and times of heavy rain that turned the place into a giant mud pit, no fights or other acts of violence broke out. Sure, there were plenty of medical emergencies, including a girl who broke her back when she fell off some scaffolding, but the event generally stuck to the 3 Days of Peace and Music theme, as advertised on the poster. Many attribute this phenomenon to the tremendous amounts of marijuana smoked that weekend, along with some LSD. If practically any other drug was prevalent at the event, there probably would have been incidents. But pot kept everyone pretty mellow. Not all of our picks for this category are mellow, but they can get pretty trippy.

If you're looking for something strange, creative, and trippy, then you won't go wrong with the Jazzpunk. This comedy game is set in an alternate reality (and that's putting it mildly) Cold War, where players have to battle corporate espionage, CyberCrime, and sentient martinis. Calling this game weird hardly begins to scratch the surface, but it's also hilarious and fun.

Far Cry 3 has sex and drugs, which qualifies it for two categories here. However, there is a there is a whole mission that involves magic shrooms, and people (particularly Dr. Eindhart) generally encourage you to experiment with different concoctions, and there is the cave mushroom sequence, so clearly this game falls neatly into the drug category.

Our shout-outs for trippy events in other games include the Giant Mushroom scene from Lollipop Chainsaw, since that game does include a hippie zombie character. Surgeon Simulator 2013 has a green syringe as one of your tools, and if you inject it into your flailing arm, you'll get to perform surgery in a colorfully trippy haze. Both Max Payne and Uncharted 3 include scenes where the main character is drugged, but our favorite is from the Fallout 3: Point Lookout DLC, where the player under the influence of Mother Punga pollen.

If nothing else, Woodstock will always be remembered as one of the most pivotal moments of music history. Rolling Stone listed it as one of the 50 Moments that Changed the history of Rock & Roll, and it's not hard to see why. Santana was a relative unknown before its Woodstock performance. Other musical artists included Janis Joplin, The Who, Jefferson Airplane, and (of course) Jimi Hendrix along with many more, Woodstock became an unmatched moment in history.

There's no better way to celebrate the music of Woodstock than getting the band back together, getting those fake instruments out from the closet, and loading up some Rock Band. Although much of the music is from more recent artists, classic rock tracks include songs by Santana and The Who. It would also be worthwhile to load up The Beatles: Rock Band if you have it, since The Beatles had such a profound impact on the era.

If you're not into fake instruments, then maybe Rocksmith is more your style. Rocksmith is a guitar teaching tool designed as a game, so getting better at playing equates to playing music better. Some of the more thematic music packs, like the Santana collection, released for Rocksmith, but Rocksmith 2014 is the better experience. In order to import the music, you have to purchase both games, the DLC pack, and a ten dollar import tool. But hey, this sort of hassle and paying too much for things kind of fits into the modern festival scene that Woodstock helped inspire. 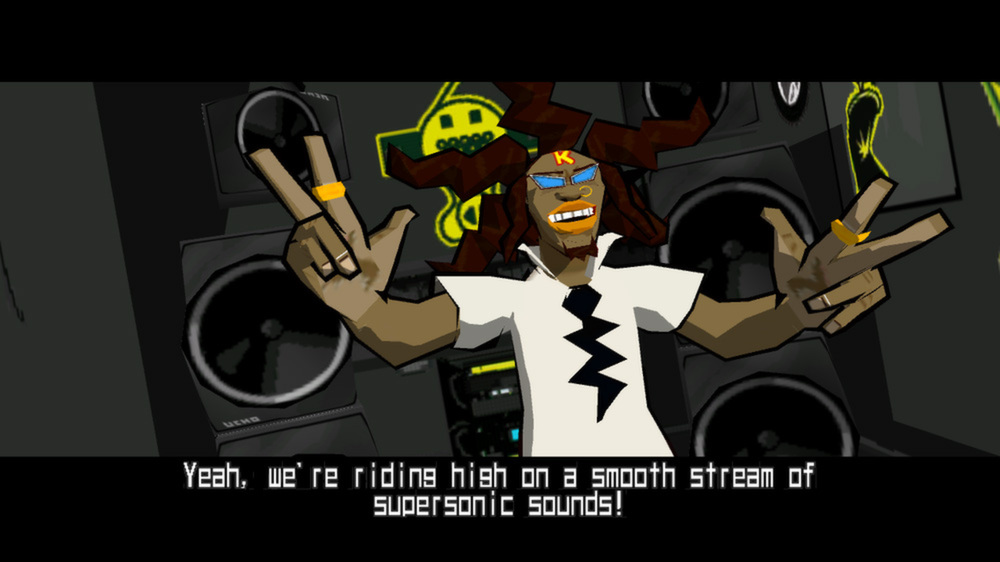 Although Jet Set Radio is only a retro throwback in gaming terms, the game embodies major themes of the 60s counterculture movement. The game features a group of youths standing up to authority, protesting non-violently through art, and powered by music. The original soundtrack (not the US one) for the Jet Set Radio series remains one of the greatest and most memorable music collections in video game history.

A spotlight goes to another Dreamcast classic, Space Channel 5. Although, the style is sort of a retro sci-fi 70s look, the game features a great soundtrack, colorful characters, and you win using the power of dance. Amplitude (which is expected to get an HD remake) gets a nod as a music game with some trippy graphics - almost similar to Rez - and so does Audiosurf.

Spirit of the 60s

No One Lives Forever 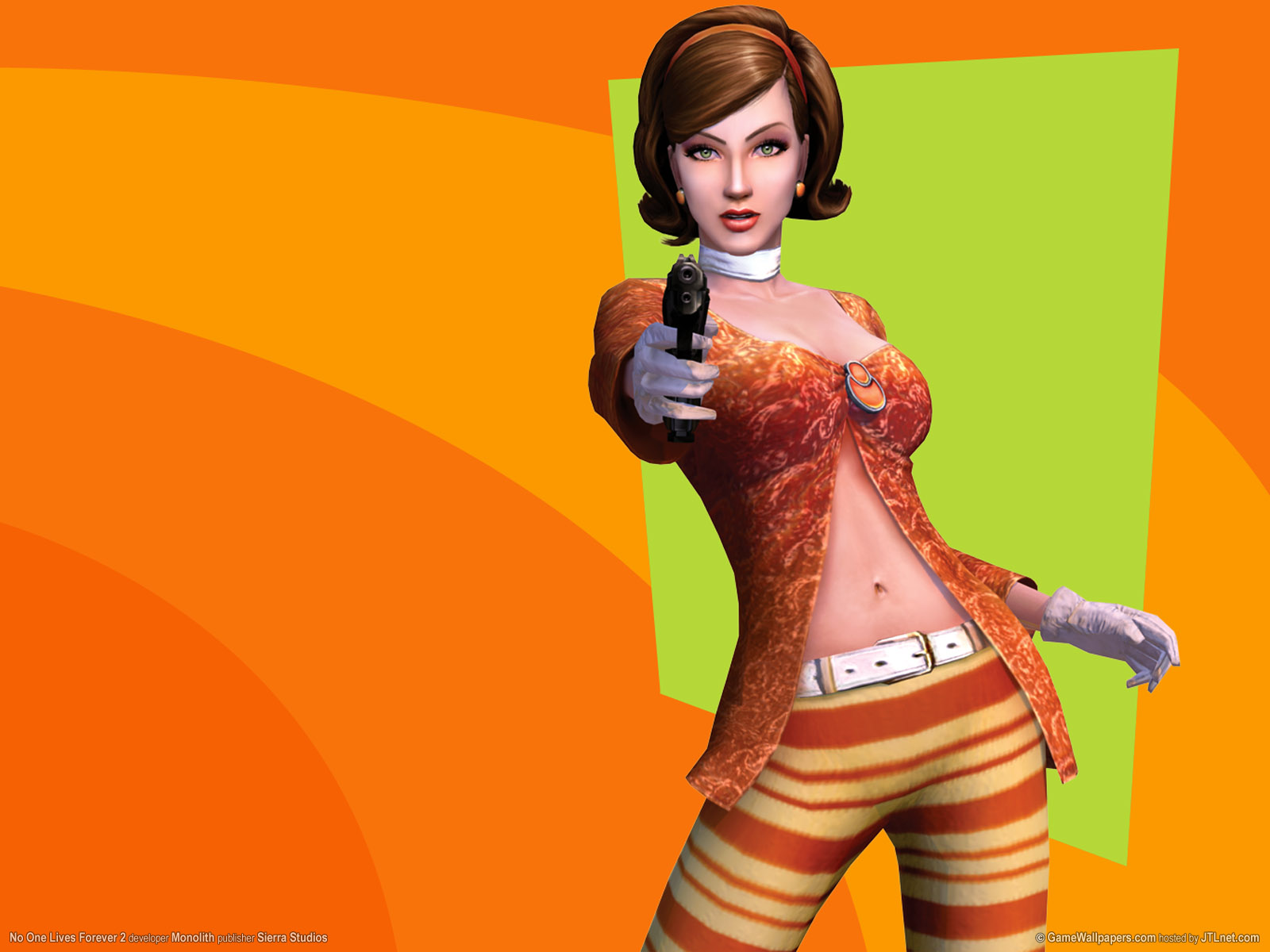 No game captures the groovy vibe of the 60s as much as the No One Lives Forever games, which are shooters inspired by Austin Powers and a number of 60s-era television shows like Get Smart. The game stars Cate Archer, a female super spy who would probably look fantastic in tie-dye, as she battles against a secret organization called HARM, that's out to take over the world. It's not quite the Age of Aquarius, but we think it gets pretty close.

With dreamlike graphics that are almost (but not quite) trippy, very mellow gameplay, and a soothing soundtrack, Osmos captures the spirit of peace. It's a strategy game where the goal is to absorb small motes floating around the level, and firing motes to propel yourself. However, firing motes causes you to shrink.

In Eufloria, you try to get seeds grow and spread out over a number of different asteroids. Like Osmos, it is a relatively peaceful game with a mellow, almost hypnotic, soundtrack. Playing it can sometimes feel like a meditative experience.

An enthusiastic nod goes to Okami, which is a beautiful game inspired by Japanese folklore. In it, players take the role of the sun goddess Amaterasu, who takes the form of a white wolf to defend a village from demons. We give it a shout out because, in addition to its nature themes, calligraphy is used as its combat system, which can be interpreted as combating evil using art.

It doesn't make sense to celebrate the 1960s counterculture without touching a little on what was wrong with the establishment. So, here are our picks that illustrate some of the conflicts that stoked the fire of revolution. 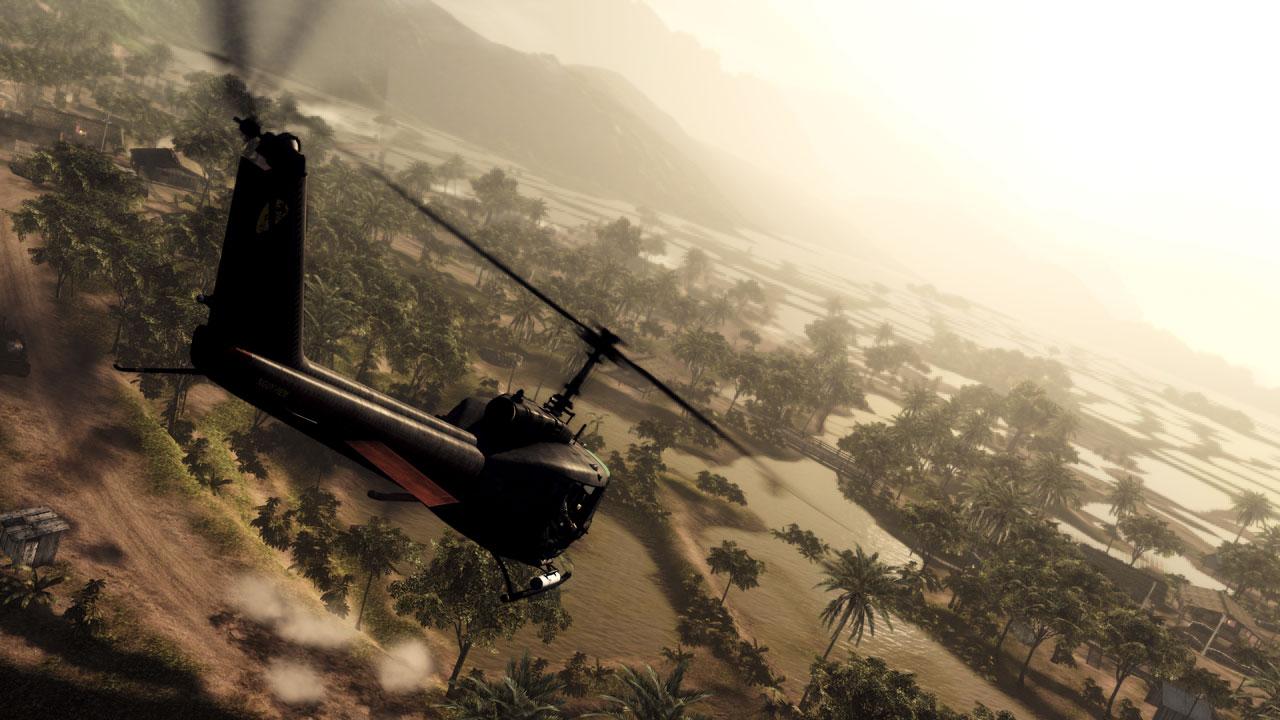 Counterculture gained momentum during the rise of the African-American Civil Rights Movement, but it was the US government's military expansion in Vietnam that pushed the movement to its peak. Unfortunately, both of these Battlefield games are multiplayer only, and they almost celebrate the idea of fighting a foreign war instead of highlighting the horrors and sociopolitical impacts of the conflict.

Spec Ops: The Line is inspired by the book "Heart of Darkness," which also inspired the movie Apocalypse Now. Apocalypse Now takes place in Vietnam, and the game borrows many of its visuals from the movie, like a line of corpses hanging by their necks from posts. The movie, not surprisingly, is what the game is often compared to, so we're going to run with it. Unlike the Battlefield games, Spec Ops has a single player experience that explores on the horrors of war, and politically charged graffiti can be found throughout the game. Unfortunately, the attention to setting didn't apply as much to the gameplay, and it ended up being a fairly uninspired shooter that undermined the story elements.

New newest Wolftenstein reboot largely takes place in an alternate version 1960, where the Nazis won World War II using superior technology. We pick this game because the counterculture movement was comprised almost entirely of the post-WWII Baby Boom generation, and because it's interesting to see a timeline where the authoritarian establishment wins, and a counterculture revolution is impossible. Furthermore, there's a references to a German version of The Beatles (Die Kafer) in the game's trailer along with a couple Easter Eggs within the game. Kick back and rock out to Mond, Mond, Ja, Ja.

A slight nod goes to Mirror's Edge, which features an anti-authority movement. However, more bombs, bullets, and running is involved than art, music and peaceful protests. You could play through without shooting anyone, but karate chopping them in the neck and kicking their faces in doesn't exactly sing love and peace either. So, perhaps Mirror's Edge reflects the more radical elements of the movement.