To some players, the Monster Hunter franchise isn't just a series, it's an institution. An institution where players can get together and slay beasts, and grow together as the ultimate hunting group. No wonder it's been so popular after all these years, and now the series is just about to celebrate its tenth anniversary.

But Capcom doesn't want to just commemorate this in any old-fashioned way. Along with the release of the forthcoming Monster Hunter 4 Ultimate for Nintendo 3DS, the company has produced a limited edition gold Felyne statue. 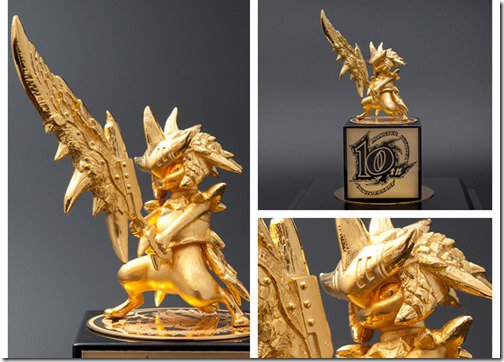 The Felyne character, who wears Rathalos style armor, weighs 120g (0.26 pounds) and is made entirely of solid gold. It stands at 90 mm (3.5 inches) tall, and is about 55 mm (2.16 inches) wide. It's quite a collectible for those who wish to celebrate the Monster Hunter series in all its glory.

But…there's a catch. Since it's solid gold and all, it's going to set you back a pretty penny. One statue will easily set you back nearly 3 million yen, or an estimated U.S. cost of $29,145. Oh, and you're only limited to buying ten. So, you know, make sure you choose your friends wisely before making the jump.

The statue is expected to be released alongside the game on October 11th. If you're curious, or genuinely rich, you can find more details on the Capcom Japan page.