Baseball teams are no strangers to special themed night at their ballparks, whether it's hosting everything Star Wars or devoting itself to a particular theme. However, it's not often we see some form of a video game night, although Ubisoft is looking to change that.

The publisher, alongside McFarlane Toys, has announced the first ever Video Gamer Night with the San Francisco Giants, which will take place in AT&T Park on September 10th, when the team faces off against the Arizona Diamondbacks.

A pre-game party at Seals Plaza will kick off the festivities will kick things off from 5:00-7:00 PM, and attendees will get a chance to snag an exclusive limited-edition Assassin's Creed figure with a Giants theme, designed by Todd McFarlane and his Toys division. A special Q&A panel will also be moderated by IGN's Naomi Kyle, discussing the forthcoming Assassin's Creed Unity, and possibly the just-announced Assassin's Creed: Rogue. 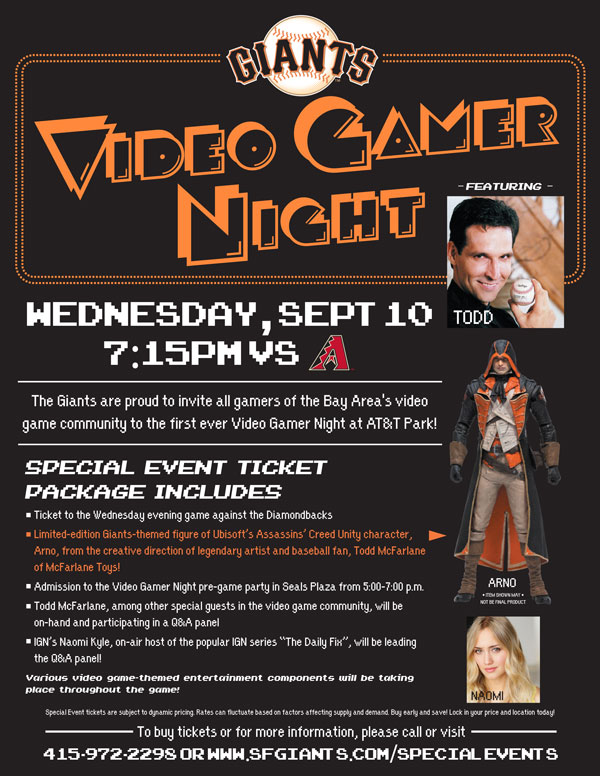 “As long time residents of San Francisco, blocks away from AT&T park, we could not be happier to participate in what we know will be a unique night for gamers and Giants fans,” said Tony Key, senior vice president of sales and marketing, Ubisoft. “Todd McFarlane is the perfect artist, with his passion for Assassin’s Creed and baseball, to incorporate the Giants’ spirit with our newest Assassin for a one-of-a-kind collectible.”

Now, if we can just get that outfit as a skin in the Assassin games...

Mafia: Definitive Edition delayed to September from August due to COVID-19
Login / Register