ESPN is considered the biggest sports network on the planet. Its moniker of 'The Worldwide Leader of Sports' is more than a catchy buzz phrase. It's the truth. The Bristol, CT-based network has become synonomous with televised sports. So when Valve announced last week that this year's International Dota 2 championships would be featured on ESPN's online network, it appeared to be the telltale sign that eSports had arrived and received the legitimacy it had been craving for years. And while "eSports" appears to be on the right track towards that path, there are still some big steps that need to be taken to move forward.

Don't get me wrong, the International competition has been tremendous. ViCi Gaming vaulted into Grand Finals with an epic set against the Evil Geniuses squad, while the Chinese team Newbee had clawed their way from a losing record to make it as far as they have. The fight for $5 million between ViCi and Newbee should be incredibly hard-fought and filled with memorable moments.

However, the preview special that aired Sunday on ESPN2 did little to convince newcomers to come back for Dota 2's Grand Finals. ESPN had a half-hour to help sell the Dota 2 International Grand Finals, not just to the fans, but also to the people that are unfamiliar with the notion of competitive gaming. The network failed to do so, to the point that if anyone new to eSports had tuned into the special, they wouldn't even know what they were watching.

First and foremost, the special did nothing to explain what Dota 2 is. Those seeing Dota 2 on-screen for the first time could see action unfolding, but with no rhyme or reason as to what's going on. Not only was there no explanation about the game, but the term "MOBA" was hardly mentioned at all. There was no overview given on Dota 2's rules or nuances for anyone discovering it for the time. Video packages for each team were filled with terms like "triple kill" and scenes like environments falling apart, without explaining what any of it meant.

Yes, I got to learned about Newbee and ViCi and their amazing journey. But I didn't learn anything about the game that they were playing to begin with. This vague presentation made the special feel inaccessible from the start, serving to confuse newcomers early on. While part of the wonder of sports is the story of individual teams and athletes, that only goes so far when fans are unfamiliar with the content that they're watching. It's the same principle by which someone watching the World Cup can only get so engaged if they don't know the rules of soccer.

There's nothing wrong with trying to reach out to a greater audience. Anyone with an interest in competitive gaming should be ecstatic that Bristol decided to take this growing audience and attempt to expand it further into the mainstream. However, I feel the special did not accomplish this goal, nor did it draw any further interest into Monday's Grand Finals, aside from the dedicated Dota 2 fans. If mainstream expansion is the goal, the special failed.

Beyond that, the special was filled with some truly cringe-worthy moments. Pulling random people for sideline interviews is almost always hard to watch, but moreso for something like a video game event, which is already looked down upon by the masses. It was especially hard not to bang my head against the table when I heard an interview with female spectators wrapped up with the words, "You guys! Super hot chicks are getting ready to play Dota 2!" It's another reminder that for as high as the stakes are at The International, the perception of competitive gaming continues to be a nerdish fad. 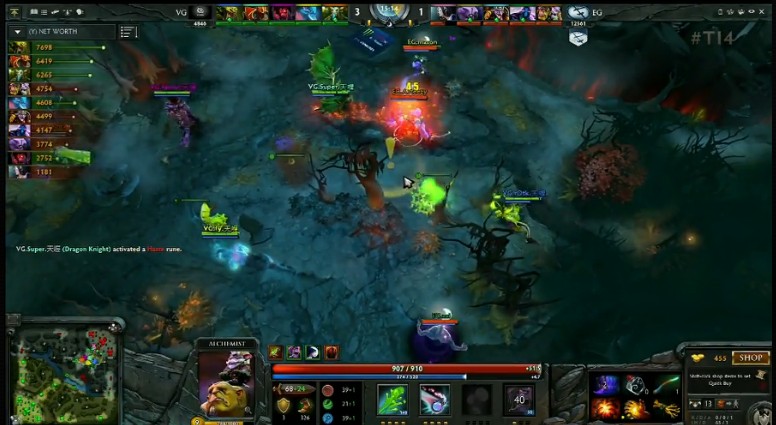 Only the interview with Valve's Gabe Newell gave the ESPN2 special any sort of value. In particular, Newell summed up exactly why competitive gaming is on the rise and why so many eyes will be glued to The International's Grand Finals.

"One of the things about the internet is, it's changing what entertainment is and what sports is," Newell told correspondent Kaci Aitchison during the special. "It's not just a few people offering an experience for other people. It's really growing out of what everybody does. So when I have a great game playing Dota, everybody else is benefitting and that goes all the way to people creating content, people running tournaments, and people competing on an international stage."

That's not to say that ESPN hasn't done a good job with embracing Newell's vision. The production values for The International streams have been top-notch, with knowledgable commentators capably able to keep track of the fast-paced action. It's been fun to watch, but there are plenty of areas to improve. For example, ESPN is missing a number of features that are present in more modern, 21st century channels. Twitch and MLG pride themselves on making competitive gaming a shared experience that can be enjoyed with folks from around the world, whether that means jumping into a chat room, sharing the stream with others, or accessing friendly on-demand archives. It's something that ESPN currently lacks and an area I hope to see them work on before next year.

Here's hoping the audience grows by then, too. But don't look for it to grow too much based on last night's special.