Evo wasn't just an event to celebrate the best fighting games in the world. It also served as a showcase for some of the indie sector's greatest competitive efforts, with a chunk of the show floor dedicated to showing off some upcoming multiplayer efforts. In-between catching the tournament action, I had a chance to go check some of these up-and-comers out.

Reptile Games has given the game of baseball an interesting and deadly twist with Lethal League, a game that originally debuted at last year's UFGT9 tournament. The game hasn't changed too much for its Evo build, aside from the addition of some new characters. But that's definitely a good thing, because it's still every bit as manic as ever.

The idea is to whack a baseball with your baseball bat (or other weapon, depending on the character chosen) and watch the ball slam around the arena, like a spotier version of Pong. The ball will move faster with each successful hit until it smashes into a player. Each character will have subtle differences, such as the giant smiley-faced Candyman's tap-dancing walk, but the idea is generally the same and it's a fun one to try out with four players. And hopefully, its GGPO online multiplayer should ensure a lasting multiplayer experience.

Not enough game feature narwhals, especially space narwhals. So developer Breakfall has rectified with a competitive multiplayer game called Starwhal: Just the Tip, which sees four players taking their whimsical animal and using their horns to joust against one another.

I played through many rounds of the game's Classic mode, where four players (each with five hearts) would compete to be the last person standing by piercing an opponent's heart. The result was enjoyable chaos, albeit with several stalemates that saw two players simply going around each other in circles. While the combat might be the most refined, the concept and the game's stages are a lot of fun. One of the best ones featured the four narwhals (all customized to look as whimsically ridiculous as possible) doing battle atop a giant ball pit.

There are also several other game modes included in the game, like Score Attack and Zones, that I didn't have a chance to play through this time around. But the Classic mode is plenty fun on its own. Starwhal: Just the Tip is coming to consoles by the holiday season, but if you're looking to try it out right now, you can pick it up on Steam Early Access.

There's something pretty fun about teaming up with friends to take some triangles and shoot a ball into the opposing team's goal. Midnight City quickly realized that and picked up the distribution rights for Tim Rogers' Videoball.

The best way to describe Videoball would be to take the top-down arcade action of the classic Geometry Wars and place it over a 2v2 sports setting. It's played with a single analog stick and a single button. The latter fires shots, which can be charged to either create massive "slapshot" projectiles or giant blocks to help bolster defense. The game continues until one side scores 10 touchdowns by shooting a ball into the opposite endzone.

The only real kink I saw in the game is that it's a bit difficult to tell when shots are charged enough for that slapshot effect, since I'd all-too-often hold the button just a second too long, resulting in a block placement, instead. But as a two-on-two competitive experience, Tim Rogers' game is frantic fun and one to keep an eye out for.

Videoball will arrive on PC in September. 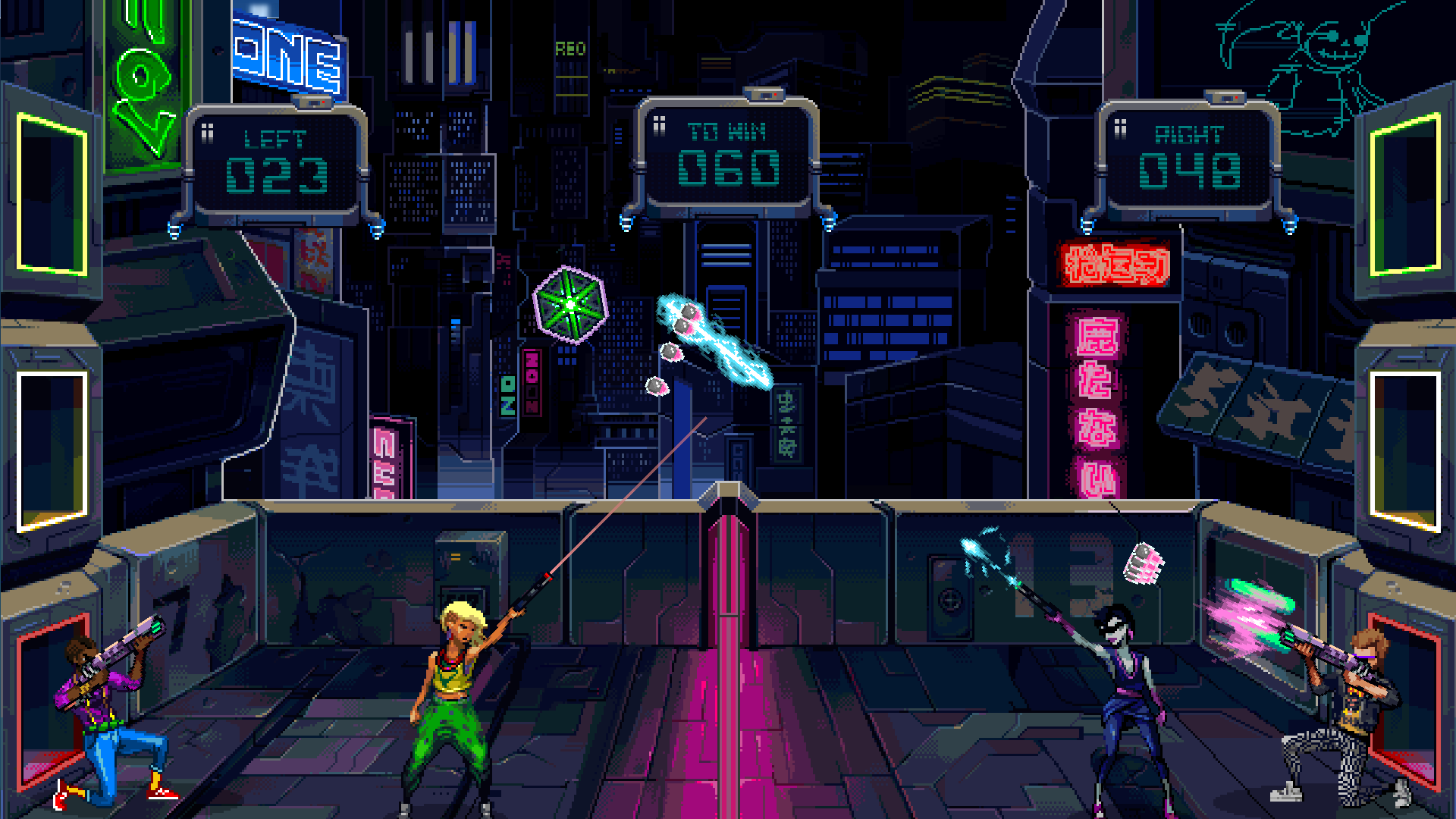 Speaking of 2v2 competitive experiences, Necrosoft brought along one of their own called Gunsport. It's a Cyberpunk take on the classic game of volleyball, only instead of using your hands, you use guns.

Each team gets one striker and one keeper, with strikers able to shoot at the ball repeatedly at-will, while immobile keepers only get one single scattershot. Points are scored when the ball falls on the opposing field or gets shot into an open slot along the opposing wall, with point values gradually increasing with successful volleys.

This take on a classic sport requires keen precision, since teams will only find success by anticipating a speeding ball's location and taking a well-timed shot to send it to the other side. It's a novel idea and one that should be a good crowd-pleaser, since games can get pretty close.

Gunsport is early in development, so don't expect to see it on PC until 2015, with console versions to follow.

TowerFall Ascension isn't exactly an upcoming release. In fact, it's been available for quite a while now. But on top of having the intense multiplayer platformer on-hand, creator Matt Thorson had some exciting news about new maps coming to the game soon.

"I have three maps I'm working on for DLC, all of them with really unique themes," Thorson told Shacknews. "One of them has destructible terrain, which is the most popular one so far. That whole level comes apart as you're playing. The other one is called Dreadwood and it's a bit of a dark world version of the forest level, with blocks trying to squish you everywhere. And the last one is a ghost pirate ship, with elevator platforms all over the place."

Given that Ascension still drew just as many crowds as it did last year, the idea of new maps is an enticing proposition. There's no word on when these maps will release and, in fact, they weren't available for play on the show floor. But when they're ready, they'll hit both the PC and PS4 versions of the game.

TowerFall Ascension is available right now on Steam, while PS4 players can pick it up for free this month with PlayStation Plus.

If Age of Calamity is canon, will Breath of the Wild 2 include its splitting timeline?
Login / Register