The summer is always a slow point for video game releases, but that doesn't mean you can't have a good time catching up or playing indie games. We've covered how to escape the summer doldrums, but starting this week we're going to take a closer look at some of the best with roundtable discussions.

This week, Ozzie and I can really dig it.

Steve Watts: You know, for all the talk of this Shovel Knight being retro, I really think that's selling it short. This has a lot of affection for older games, but the beauty of it is how well it imitates the feeling of firing up your NES while embracing a bunch of modern ideas. It's got corpse runs! And loot! And upgrades! All of these things existed back then, but fitting them all in a single package would have blown my little grade-school mind at the time. You just didn't get that kind of genre-blending in the actual 8-bit era. It's really a distinctly modern game that evokes some nostalgia, but doesn't lean on it as hard as something like Ducktales Remastered or even Bionic Commando Rearmed.

Ozzie Mejia: It's crazy, because you can choose to look at it as an 8-bit homage. And it can fill that need if you want it to. Want to play it and approach it like an 8-hour Mega Man game? You can totally do that. But there's so much more depth to it. You're absolutely right that it evokes nostalgia, but it doesn't rely on it. I appreciated DuckTales Remastered as an update to the original and nothing more than that, but it's clear that Shovel Knight was aspiring to be a lot more than a simple throwback.

SW: Speaking of Ducktales Remastered, I remember first seeing this game at PAX East. Yacht Club had formed from former WayForward staffers, and Capcom chose that event to debut Ducktales from (of course) WayForward. Yacht Club said the similarities were purely coincidental, and I have to admit I was a little skeptical about that claim at the time. Having played it now, though, the shovel strikes me a lot differently than the Ducktales pogo cane. It has more depth, thanks to the inability to pogo anywhere and a much wider variety of soil types. I think that's really just one striking example of how Shovel Knight doesn't rest on its laurels and lean on its influences. It's constantly finding ways to borrow and then iterate.

OM: I really did go into this game expecting DuckTales, but wound up with far more than that. The level design, in particular, is everything I loved about those platformers like Mega Man. But Yacht Club went so far out of their way to add dozens of secrets to each stage, somehow making exploration an important element. Poke around everywhere and make sure to hit everything, but oops, you dug up that dirt patch too early, so now you inadvertently closed off a path to yourself. It's the kind of replay value that I'm not used to seeing in these types of games.

SW: Oh yeah, the exploration is pretty wild and always seems to reward you for poking around. I thought it was really clever how the stages have some collapsible walls that are very telegraphed with iconography, while others are much more well-hidden. It's like the obvious ones are there to train you to explore and find the others. In fact, the individual stage design does that really well too. It iterates progressively, usually giving you a "safe" version of a challenge first so you can see how some new mechanic works. It's a little thing, but it's one of those design flourishes that older games pulled off really well. In our modern age of tutorials, game designers don't usually trust us this much to pick up on lessons through experience.

OM: I like that you're trusted to just know how this type of game works. You're not given a drawn-out tutorial phase explaining how the shovel works or how the pogo mechanic works, because this kind of thing is easy. I understand the Stan Lee mentality of "Every comic is someone's first" when it comes to games, but not every game needs a lengthy tutorial segment. Sometimes, someone just wants to play and Shovel Knight lets you do that. And speaking of training you for later on, even the introductory level is filled with its own cheap deaths. The dragon hovering over the cliff, the skeleton knight that charges you as you're jumping, and a couple of other tricky jumps littering that stage. You get to see what kind of game you're in for right off the bat and the game is telling you in no uncertain terms that if you can't take the heat, get out of the kitchen. 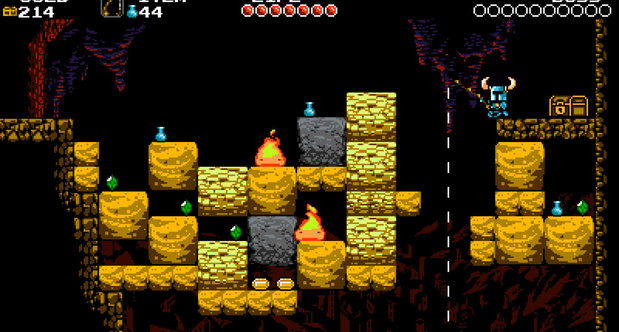 SW: Definitely. It's the kind of game you slowly gain mastery of. I died a few times in the intro stage, but when I went back later to farm for some loot I breezed through it easily. I had more life by that point, of course, but I think it was more because I had gotten a handle on it. I think really honing your skills at a game is pretty rare outside multiplayer in modern games, so it's super-satisfying to feel yourself getting better at something like this. Part of that learning by experimentation comes down to how low the penalty is for death. Sure you're going to die a lot while figuring out the mechanics, but it's not as if you're going to get down to zero lives and get kicked out of the stage. By tying your lives to loot, you basically reach a point where dying is cheap and easy. If you're really struggling with one particular spot, you'll at least know you can get back there and get your loot bags before you die in your next attempt. Not to mention, I learned pretty early to spend as much cash as I could before entering a new stage, just to minimize the loss risk.

OM: The infinite lives is the best thing this game has going for it. Yes, losing loot hurts, because it's tied to the upgrade system and you need every single coin to make your character better. It's the best penalty they could have come up with, because there's nothing more frustrating than hitting a string of hair-pullingly difficult sequences only to lose your last life at the boss and have to run through it all over again. There's none of that here and I think we can agree that it's the old-school trope that all of us can do without. I'm glad Yacht Club realized that, too. And let's face it, there are a lot of places where you need grit and persistence. Those jumps in Propeller Knight's level and the rocket rides in Treasure Knight's level, just to name a few. Those are spots where it's easy to give up the minute you hit a "Game Over" screen. But since I kept respawning in, I just shrugged and kept thinking I'd get it on the next try and it could continue like that for a good hour or so.

SW: That's one reason I'm glad I picked it up on 3DS. Aside from just enjoying the feeling of playing a game like this on a handheld device, the sleep mode worked in its favor in a big way. If I didn't have the patience or time to keep banging my head against a hard part for an hour, I could close the clamshell and come back to it later without losing any progress. I haven't tried the Wii U or PC versions, but I would imagine neither of them have any kind of suspend state feature like that. It's handy for a lot of games, but especially one like this where you might need to stop but can't save your progress mid-stage. Did you run into any problems like that playing the PC version?

OM: I don't think you could save midway on the PC version, but then again, I never tried to quit out in mid-level. I'm the kind of guy that sets his sights on the end of a level and just goes all-out and relentless, like the German soccer team against Brazil. I have to say, I got the review code for PC, but I really want to try out those 3DS StreetPass features. The idea of taking on another Shovel Knight on the road just sounds fun, like those Shadow Link battles from A Link Between Worlds. It's not a "necessary" feature for an optimal experience, but I have to say that having that multiplayer aspect there does put the 3DS version above the other ones.

SW: You bring up the StreetPass feature, which I haven't found all that useful. Admittedly I've only StreetPassed one person, but this was one of the few areas where I think a little more explanation would have been handy. It just throws you in to formulate a strategy without really helping you to understand what the StreetPass battles will be like. I have a better understanding of it now that I've seen one (and lost miserably), but I think I could've formulated a better strategy if they had pitted me against an AI ghost or something for practice. The actual 3D on the 3DS is a little strange too, since it's just different levels of 2D sprites. The effect is kind of cool, but it wasn't enough to convince me to keep the 3D on. Mainly, I just went for the 3DS version to have it on a handheld, so I could pretend I was 10 years old and playing Mega Man games on my Gameboy while my family drove to visit grandma.

OM: I actually wonder how much mileage the Wii U users are getting out of the Miiverse features? The idea of leaving bread crumbs on the GamePad to help find those hidden rooms must be a handy one, especially if you haven't found all of the game's inventory pieces. I know I haven't! I managed to get through with the fire rod, but not much else.

SW: That would definitely be a big help. I've found most of the items, but I'm still missing the flight ability that you need for one of the bonus stages. I think that might be the less useful of the console-specific features, though, since the Internet renders any kind of "guide" functionality pointless pretty quick. Plus in a game like this, 99% of the experience is skill instead of knowledge.

OM: Don't I know it. Sure, I knew where I needed to go in Propeller Knight's stage, but actually doing it is something else entirely. You need some good reflexes to get through those levels.

SW: Bringing it back around to the beginning, that's probably the most old-school thing about it. You can't really grind your way to victory in most cases. It's just pure, brutal insta-death.