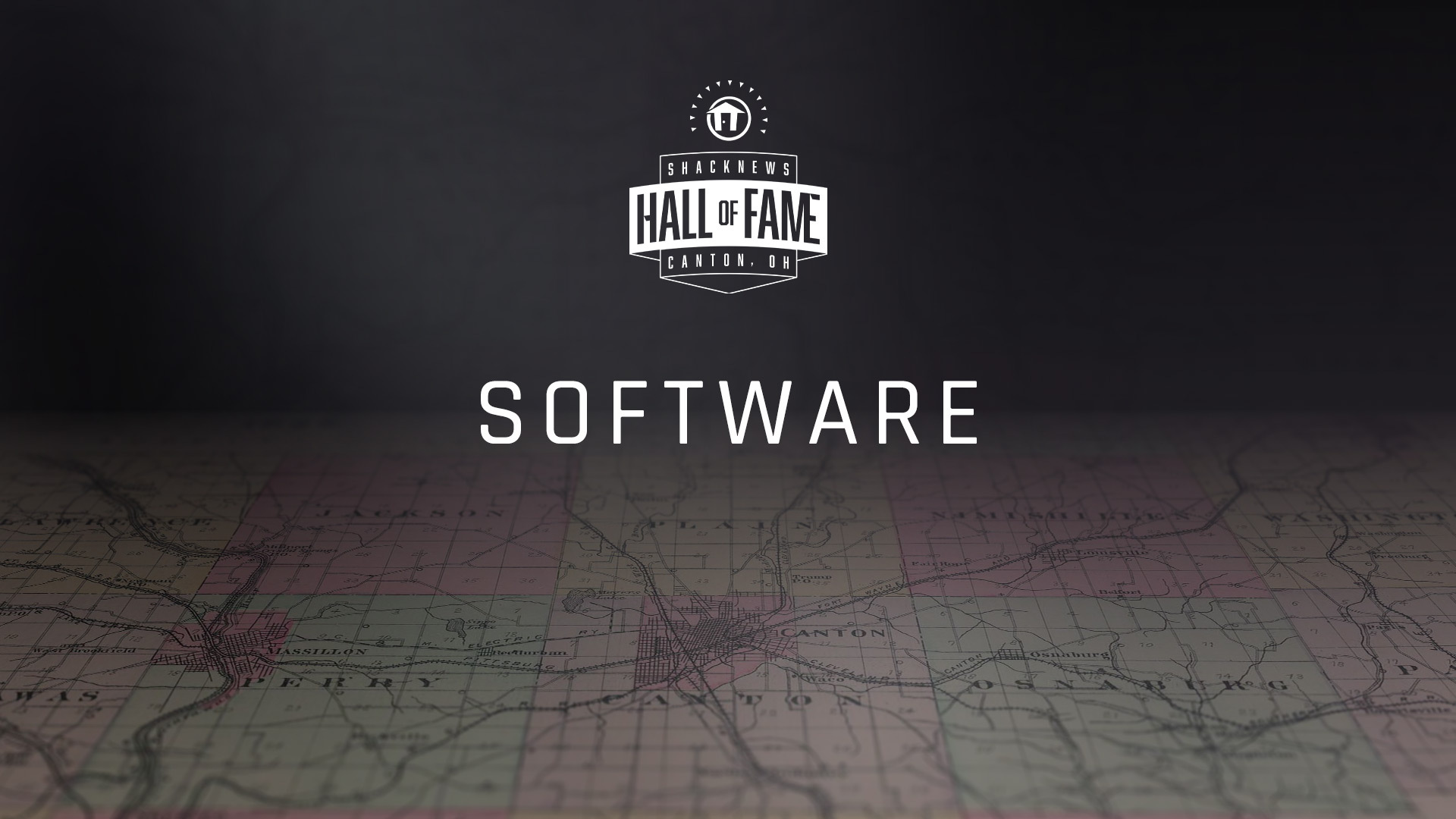 Welcome to the Software wing of the 2021 Shacknews Hall of Fame class. This category recognizes programs that contributed to gaming in some way, and in some cases, made it possible. Some entries include Further Reading sections where you'll find features and other stories that further illuminate this year's inductees.

While the present-day form of AOL is a shell of its former self, the Internet service provider really did provide a whole ecosystem for gamers to engage with. The actual AOL desktop client featured groups where users could chat about all sorts of great things. Many people took advantage of the free trial disks that the company used to send out. The original AOL is a relic of a different time on the Internet, making it a perfect inductee into the Shacknews Hall of Fame.

Before Blizzard launched Battle.net as a vital component of 1996's Diablo, playing PC games online with friends or strangers often demanded hours of troubleshooting modems, or convincing computers to talk to one another over serial cables, or hoping your parents or siblings wouldn't pick up the phone in the middle of a game. Battle.net brought the point-and-click ease of Diablo's mouse-driven interface to the masses. Open the multiplayer tab, connect to Battle.net, create or log in to your account, and you were dumped into chat rooms with other players eager to slay demons.

Later releases such as StarCraft, Diablo II, and WarCraft III included support for Battle.net, and it was free from day one—no subscription required.

Before the world wide web, heck, even before AOL, Bulletin Board Systems were the way that tech-savvy folks would engage remotely. Folks would dial into local phone numbers running servers where PC users to chat, play text-based games, and get the warez from their hacker homies. Many a LAN-party were planned via BBS and in a lot of ways it was the beginning of online friends planning IRL meet-ups.

Online socializing got it roots here and the importance of what that ended up meaning for modern social networking really can’t be emphasized enough. Land lines and baud modems may be a thing of the past, but back in the day only the most 1337 were chilling BBS-style.

Before DirectX, PC games had to account for as many combinations of computer hardware as possible. If you didn't have a popular sound card like the Sound Blaster 16, for example, in-game audio would be spotty at best, nonexistent at worse. DirectX is an API (application programming interface) that simplifies one of the game developer's most difficult jobs: Convincing your computer and software to get along.

DirectX comprises several libraries, some for graphics, some for audio, some for input devices like keyboards and controllers, and others for networking. Not only did DirectX become a staple of later Windows releases, but it laid the foundation for the Xbox console years later.

DWANGO stands for Dial-up Wide-Area Network Game Operation. The service allowed players to take their multiplayer games like Doom, Doom 2, and Duke Nukem 3D online over their telephone line. While this wasn't the ideal way to play games that were designed for play over local area networks (LAN), DWANGO certainly served its purpose back in the early days of online gaming.

Flash came in many forms, whether it was Macromedia, Shockwave, or Adobe. Whatever anyone called it, there was no denying its importance to home computing. Flash graphics allowed people to add interactive elements to various websites, introducing the world to video content and animation.

For gaming, Flash was integral to the growth of indie gaming. Young developers could use Flash to create games for sites like Newgrounds, giving them a fresh start before going on to lead the indie gaming boom of the 2010s.

ICQ launched in June of 1996, making this the first year of eligibility for the iconic chat application. Users had ICQ numbers as opposed to screen names and many will remember the "uh oh!" notification noise. Many gamers would use ICQ for organizing games, or just chatting about whatever floated their boats. The technology behind ICQ ultimately lead to an acquisition by AOL, where a lot of great Internet ideas went to die.

In the 1990s, you either had two or more computers in your home connected to a local area network (LAN), or you had Kali. Created by industrious programmers Scott Coleman and Jay Cotton, Kali fooled your computer into thinking it was connected to a LAN—the only way to play many PC games like Doom, Duke Nukem 3D, Command & Conquer, and WarCraft 2 with more than two players—when you were really online battling for gaming supremacy over your parents' America On-Line account.

Kali paved the way for competing services like TEN (Total Entertainment Network), PSN, and Xbox Live. Better still, you only had to pay a one-time fee.

Much of the early days of Shacknews' existence was spent on Internet chat rooms. It's amusing to think back on today as many Shackers now converse on Discord in an almost identical fashion. Internet relay chat was a revolution in online communication, and mIRC sat at the heart of the conversation in the 1990s.

Shack staff's original channel for organizing editorial coverage was on IRC. While chat programs are largely ubiquitous on the Internet these days, mIRC truly innovated in the space and laid the groundwork for apps like Discord and Slack.

Before Windows, there was Microsoft's Disk Operating System (MS-DOS), a command-line operating system that was tricky to use but became the most widely supported OS for PC gaming until Windows 95. In fact, DOS was so prolific and so malleable for developers that it took an internal team at Microsoft porting Doom to Windows 95 to prove to developers that Windows 95 was the next frontier for computer gaming.

Like Peter Parker's Uncle Ben, DOS believed that with great power came great responsibility: DOS wasn't easy to use, but as you figured out arcane text commands and configured boot disks, you learned more about computers themselves, turning DOS into an unwitting teacher for generations of young players.

OpenGL is an API for rendering 3D and 2D vector graphics. The API was built to interact with computer GPUs. OpenGL was launched in the early 1990s, but really began to shine with the introduction of GLQuake. Much of our history here at Shacknews is tied to our origin as a Quake fan-site and GLQuake's release was a seminal moment in video game history with OpenGL technology at the center of the explosion of excellent 3D gaming experiences.

Quake's release in June 1996 marked the beginning of long-term support started by id Software and maintained today by the game's community. John Carmack wasn't content to release Quake and move on to other projects. Over the two years following its release, he released updates for 3D accelerator cards (known today as GPUs) and, with QuakeWorld, retooled the game's networking infrastructure—which was designed for play over local networks—to offer faster speeds, a boon for the majority of players still fragging over dial-up connections.

While it still had a DOS core to it, Windows 3.1 was the blueprint for the modern PC environment. It made gaming more accessible to the less tech-savvy consumers of the time and even featured a few built-in games that would become staples of just about every cubicle worker from here to eternity. Sure, you don’t really think of games like Solitaire, Minesweeper, or Pinball as monumental, but you can’t argue that they have their place in gaming history, especially since they reached a larger casual audience.

DOS had its share of problems. It was user-unfriendly, and game developers had to factor in countless assortments of sound cards, memory types, and other peripherals to ensure their game would run on your PC. Even so, there was no gold rush to Windows 95. Earlier versions of Microsoft's Windows OS had been resource hogs, and game developers needed every last byte of memory and processing power.

A small team of developers inside Microsoft introduced DirectX to handle the relationship between game software and computing hardware, slowly but surely coaxing more developers to embrace Windows 95.