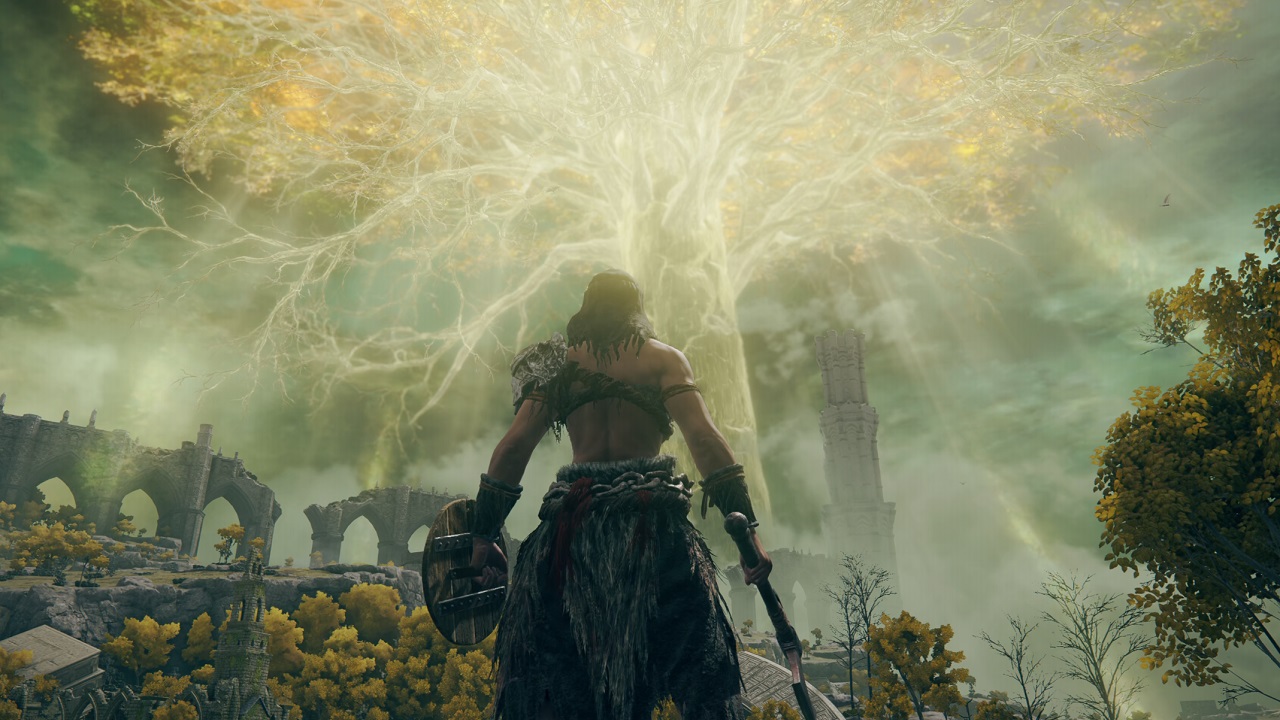 As I was playing bits and pieces of the Elden Ring Closed Network Test over the weekend of November 12, I found myself both marveling at how far this genre has come and how much FromSoftware has evolved its style. I also noticed how much it falls back on the things players of the Soulsborne series (and its detractors) have come to expect from this kind of game. It’s got freedom and refinement like no game I’ve ever seen from Hidetaka Miyazaki, but, as usual, it’s also not afraid to cast you into the wild and beat you to a pulp if you’re not on your toes at all times.

I think one of the most enjoyable things about Elden Ring from the limited time I played is how much DNA it has from some of the best FromSoftware’s games. At its skeleton, it’s still a very Soulsborne-handling game. You have a main hand weapon and can two-hand it if you want for stronger damage, but you can also equip offhand gear like another weapon, shield, or magical catalyst. You carry one flask that heals health and one flask that restores magic (faith points or FP here). If you have a shield, you can parry enemy attacks and if you break their stamina down, parry them appropriately, or get behind them for a back attack and do a big-damage critical hit. There’s also plenty of consumables to find and use throughout your adventure, ranging from curatives, to multiplayer activation, to offensive tools, and more. There’s even checkpoints to serve as your resting places for restoring health/magic flasks, fast traveling, and respawning enemies in the world.

The part where Elden Ring really started to shine for me is in how it both incorporates previous winning FromSoftware ideas and even evolves its usual quirks. There’s a lot of good stuff from Sekiro: Shadows Die Twice in here, including jumping, stealth, and stance breaking. Breaking an enemy’s stance allows you to instantly deliver a critical blow and there are attacks that do stance damage better than others. A sprinting, jumping, or charged strong attack will break through an enemy that guards too much and leave them open to devastation.

I think one of my favorite things refined in Elden Ring so far is the implementation of battle skills. Every main hand weapon carries a special battle skill that you can activate with a trigger button aside from your main-hand light and strong attacks and offhand attack or defense. A scimitar allows you to cast a wave of wind at your foe when you activate it where an axe allows you to go into a series of swings as long as you hold the button and have the stamina. Some require FP, some don’t, but each new weapon presents interesting opportunities in both its basic functionality and battle skill.

I also like that this game allows you to prioritize the use of your flasks. You have a maximum amount of charges between your health and magic flask, and you don’t have to keep them even. If you want to have five healing flask uses and zero magic flask uses, you can. You can also favor magic flask use if you use a lot of spells. Finally, you can also rebalance your total flask charges at any checkpoint as you go, allowing you to adapt to any situation you find yourself in as you see fit - a brilliant advancement of the usual FromSoftware healing item in my opinion.

Elden Ring is open-world for the most part and it really borrows from working formulas outside the FromSoftware design to accomplish this. I’ve seen the comparisons to Legend of Zelda: Breath of the Wild and they are apt. Heck, the Network Test even started by letting players go through an optional tutorial before dumping them on a plateau with areas beyond that they can’t reach without gathering mobility upgrades. Though you have a main quest, you can also journey off the beaten path immediately and just explore the gorgeous world to your heart’s content. It’s not that other FromSoftware games didn’t have freedom of explorable options, but this game takes it to a whole new level not seen in Soulsborne games.

Even then, it’s not just Breath of the Wild here. Elden Ring also feels like it has some Skyrim and Dragon’s Dogma DNA in it. As you journey around, you can take on the main quest, or you can discover multitudes of smaller instances and encounters. I stumbled into two mini dungeons in my time with the game, each presenting a different challenge. One was a cave camp filled to the brim with wolves and a leading beastman miniboss at the end. The other was a maze of imp-like gargoyles and fire traps that ended at a stiff dog-like gargoyle boss with a sword and fire breath. Each instance provided rewards I totally could have missed if I just stayed on the path I was supposed to go.

I really like the freedom Elden Ring offers in its discoveries and smaller encounters and I feel like that’s going to make this a continually rewarding experience as we unravel everything the Lands Between have to offer.

As much as I could go on about how Elden Ring has improved and evolved FromSoftware gameplay, it’s still a very FromSoftware game. By that I mean that every corner of it is bristling with threats that will kill you dead if you don’t keep your guard up. For instance, once you get out of the tutorial cave, there’s immediately a knight on horseback called the Tree Sentinel patrolling the path ahead. Get its attention and it will quickly and merrily beat you into bloody paste. It’s not undefeatable, but it’s very clear the Tree Sentinel’s early appearance is meant to convey that, yes, FromSoftware is back on its BS in this game and it will crush the weak of heart without mercy if they dare get overconfident.

Even in my limited time with Elden Ring’s network test, I came across instances where the game would absolutely punish the heck out of the brazen or unknowing. You are extremely killable and all it takes is one opening to light you up. The aforementioned cave of wolves handed me an experience where I accidentally caught one of their attention and got swarmed and stun-locked to death by multiple attacks without a chance to answer. The bosses, too, are a learning experience where you’re going to spend time figuring out variably difficult patterns or die trying.

Thankfully, this game also has the typical means to overcome such challenges. Obviously, leveling up with currency from killing foes is one thing, but you can also engage in multiplayer to call on the help of others. You can also use scrolls in the world to summon spirits to aid you in combat if you don’t want to engage in multiplayer, relatively new to this series and different from the NPC characters you could sometimes call on in past games. There are also notes to be found everywhere in Elden Ring carrying everything from useful hints (always read the ones before a boss to possibly glean a weakness) to outright trolling. I admit, I left a few silly messages here and there. It’s typical FromSoftware communicative fun.

That said, though, the trademark FromSoftware difficulty and cruelty is still present in this game for the uninitiated and for all the unique things Elden Rings brings out of the FromSoftware formula, it still does all of the things that make these games incredibly challenging and frustrating. For instance, die twice without spending your currency or making it back to where you died to recollect it you could lose it all - one of the most punishing of all mechanics in Soulsborne games, completely intact for this new and challenging experience.

So much more than before, but still undeniably FromSoftware

Now that I’ve had a taste of exactly what an open-world FromSoftware game can be, I’m admittedly giddy to see more. This isn’t just a gimmicked FromSoftware game. It’s a thoughtful implementation and/or evolution of so many of the things that have worked throughout the developer’s action-adventure history. It feels great and the Lands Between is looking like an absolutely captivating world full of secrets to explore. That said, this is still a FromSoftware game and it brings with it all of the tremendous challenge that comes with that, built to crush even the slightest misstep. I think this is easily set to be the best thing Miyazaki has ever given us by far, but whether you’re a fan of FromSoftware games or not, I don’t think this is going to be a game that bridges the gap and changes your mind.

These preview impressions are based off of access to the Elden Ring Closed Network Test on PS5. Elden Ring comes out on PS4, PS5, Xbox One, Xbox Series X/S, and PC on February 25, 2022.