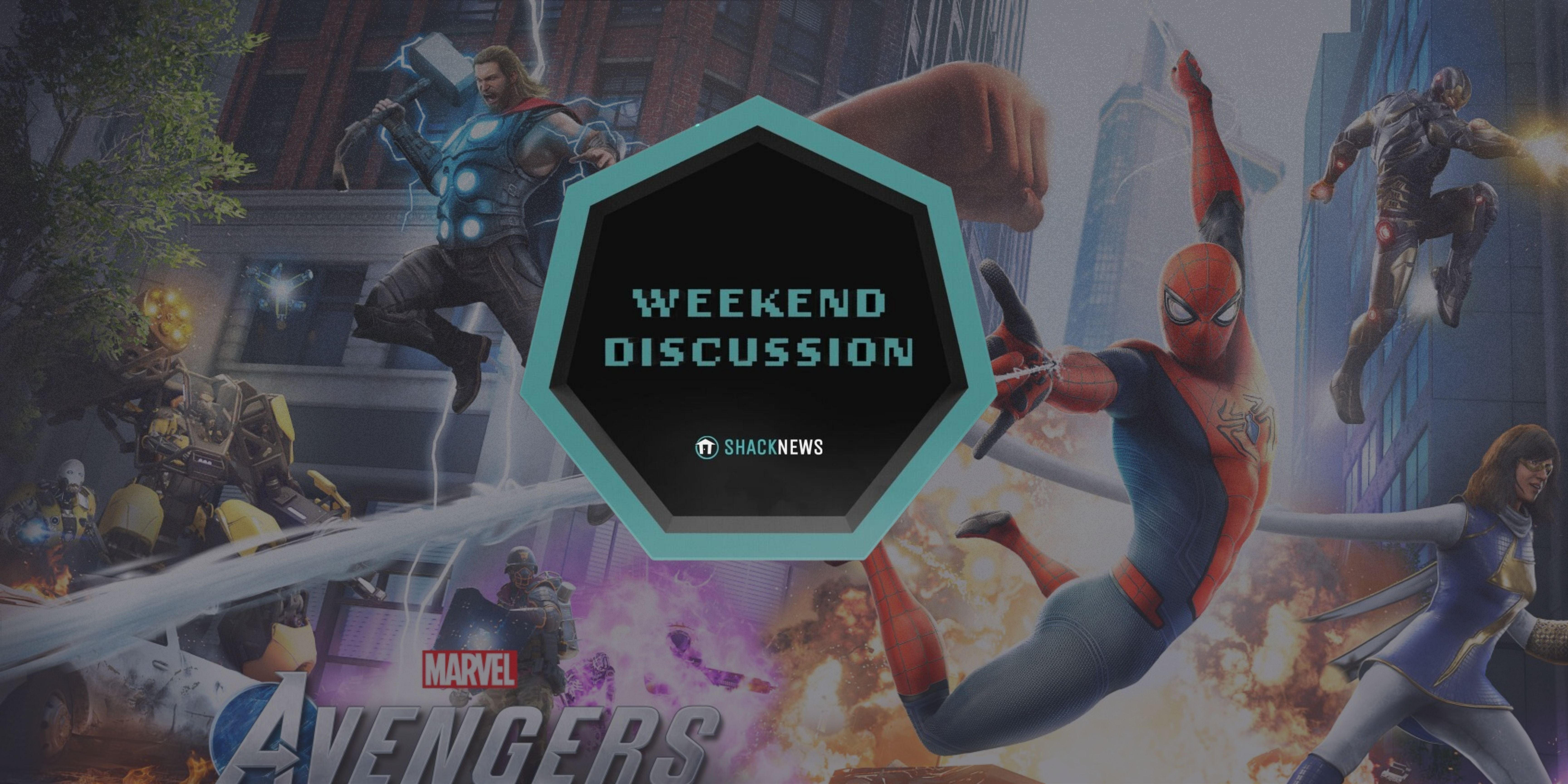 Welcome to another fall weekend! Get cozy and read this week's Weekend Discussion.

Before we begin, we'd like to take a moment to acknowledge ThomW Day. Today is Thom's birthday, and he's been a big part of Shacknews and Chatty over the years. Thom created the LOL script, and helped us integrate it into the site. Each year, Shacknews likes to celebrate Thom's birthday with ThomW Day. Have a great one, Thom.

Spider-Man is finally coming to Marvel's Avengers but is it too little too late?

Spider-Man is my favorite character in the Marvel Universe and he's gotten plenty of love over the past few years in both gaming and traditional media. Now that he's finally coming to Marvel's Avengers on PS5 and PS4 exclusively, I wonder if this game will finally feel like the complete package. They also have direct competition with the well established universe and quality version of Peter Parker created by Insomniac Games.

There's been a ton of updates to the game since release and the roster has seen a pretty significant increase as well with some major additions to the story. They do also seem to be paying attention to the details when it comes to providing some solid fan service. I'm hoping that being able to web-sling with my favorite Avengers characters will feel satisfying but there's still a part of me that morns what this game could have been with a better track record and more polish at launch. The fact that the game is available on Xbox Game Pass is a waste here because the free Spider-Man update is Playstation exclusive,

We won't have too much longer to wait as Spider-Man will be making his debut on November 30th.

The Boys poking fun at Disney+ Day was one of the best moments of the week.

Happy Vought+ Day! Here's a look at what's coming up from America's favorite streaming platform. Sign up now before the subscription increase next week. pic.twitter.com/7kyTF9YuMF

The last trailer for Ghostbuster's is pretty good.

I think Paul Rudd was definitely the right one to lead this one. There's some heart to what I'm seeing on screen and that's key to a Ghostbusters story.

I am not the best at FPS games so I definitely relate to this joint.

After the atrocious Predator sequel from a few years ago, I am actually pretty excited about this concept. I hope they respect and highlight Indigenous culture with some bad-ass moments from the female protagonist. Fingers-crossed that this one is good because the franchise definitely needs some redemption.

An all-new entry in the @Predator franchise, “Prey” is set in the world of the Comanche Nation 300 years ago. See the original film directed by Dan Trachtenberg (“The Boys,” “10 Cloverfield Lane”) only on @Hulu in 2022. pic.twitter.com/3A3KSiWoqn

The potential is endless.

I love owls so I had to include this one.

brother what have they done to you pic.twitter.com/IreKDYl3se

Gotta check the new GTA Trilogy Remastered to see if this is still accurate.

Xbox and Gucci have a new collab where you can purchase this fancy Xbox Series X for $10,000. The Xbox itself looks fine but the case is atrocious to me. What do you think?

In the year of the House’s centennial, Gucci and @Xbox come together to celebrate their respective anniversaries by creating 100 numbered Xbox Series X sets. The bundle appears in images by @HYPEBEAST @hypebeast featuring @EmeraldRose and @KojeyRadical. #GucciXbox pic.twitter.com/SkNdUfPSqV

There's been ton's of glitches, bugs, and graphical errors on display with the new GTA Trilogy release. Reminds me of the good ol' Cyberpunk days.

I've changed my mind, the GTA remasters are perfect.

(this is looking backwards while in first person, on the quadbike) pic.twitter.com/JEB0SC7y3V

In Case You Missed It

Blake Morse has a phenomenal review of the brand new Legend of Zelda 35th Anniversary Game & Watch that is totally worth checking out.

Check out the top 10 most viewed articles on Cortex here.

There were some exquisite vibes this week to dive into. I have to show some love to Aminé for this trippy vid. And you can't beat a video game reference in the title right?

Alright, that's another Weekend Discussion in the books! If you see ThomW in the Chatty, make sure to show him some love! And, as always, if you enjoy what we do at Shacknews, consider subscribing to Mercury . Have a good night!