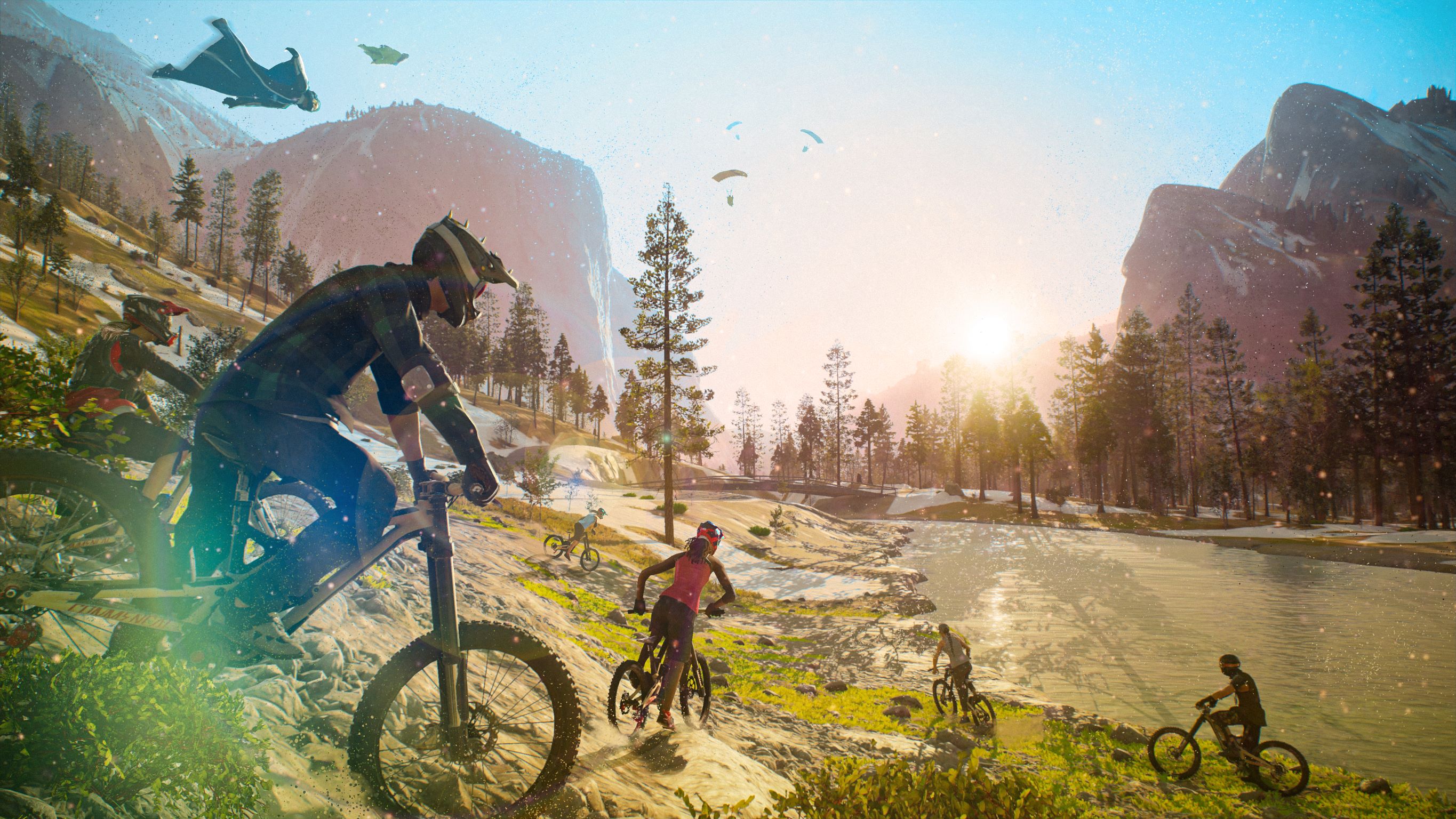 Ubisoft raised quite a few eyebrows when it unveiled Riders Republic during a presentation back in 2020. This racing game not only allows players to pilot a variety of different vehicles, it allows them to traverse a large open world filled with other players. I had a chance to play Riders Republic ahead of its October release date, and got a decent idea of what the Riders Republic experience will be like.

In Riders Republic, players will compete in races on bicycles, snowboards, skis, paramotors, and more. A point of emphasis from the development side is to ensure that all of these vehicles feel unique. As I played the game using an Xbox controller, I could feel a distinct difference in how each vehicle controlled, as well as how they moved in the environment. Sliding down a dirt hill on skis is much more difficult than doing so on a bike, for example.

Looking at the in-game map, I liken it to what’s seen in the Forza Horizon games. There are a ton of different races that players can either fast-travel or make the trek to, these races yield different rewards based on player performance. One aspect about the game that I learned during my preview was that when I raced against the computer, I wasn’t actually playing “the computer.” Instead, all of the other racers were “ghosts” retracing the exact path that other players took when doing the same race. It’s not a new concept, but one that will help give a feeling of authenticity even when you’re doing a solo race.

As players complete races and earn experience, they’ll unlock new vehicles with upgraded stats to take with them to take to races. Every piece of gear has stats that indicate how it will perform, with the player being able to choose vehicles from their collection at the start of a race.

Another major component in Riders Republic is the diversity of the map itself. There’s a wide variety of different vehicles to use, and the map makes sure to give you something for all of them. There’s snowy slopes that are perfect for skiing and snowboarding, there’s mountainous regions designed for bike-riding, and there’s plenty of obstacles up in the air that create a challenge when you’re soaring around in a jet-powered glider. Many of the areas in Riders Republics were created using a satellite scan of real-world locations.

What’s really neat, is that although most areas are designed specifically for one vehicle or another, the developers make an effort to weave them all together as seamlessly as possible. For example, while I was biking down a mountain, players in a paramotor soared overhead, in a completely separate race from the one I was participating in. When I was flying in between mountains, I was only a few feet away from bikers that were hitting ramps and catching some major air themselves. The communal aspect seems to be at the heart of Riders Republic.

In addition to standard races, there are several alternate modes to give players a decent range of options when playing Riders Republic. There’s also Trick Races, where there’s still a beginning and end, but players are ranked entirely based on how many points they accumulate from properly executing tricks.

One mode that really stood out to me was Multi-Races, where players will man a number of different vehicles over the course of one race. You may start off on a bike, hit a ramp, and upon going airborne, you’re suddenly flying a jet-powered glider. In that same race, you’ll fly over a snowy peak and be dropped onto a snowboard, hitting the ground with some serious momentum. Again, this mode felt like it captured the essence of what Riders Republic is all about.

Of course, it wouldn’t be an online multiplayer game if there weren’t cosmetics for players to show their style when playing with friends and others. In Riders Republic, there are a bunch of different gear options, with cosmetics broken up by their respective environments. During my time with the game, I rode a bicycle in a giraffe costume and skied down a mountain with a reindeer mask on, using branches as my ski poles.

Cosmetics can be unlocked using the points earned in-game, as well as real-world cash. There’s also an assortment of paintjobs and decals that can be applied to your boards, skis, bikes, etc. that make them uniquely yours.

Riders Republic feels like a game that’s looking to deliver on the promise of titles like The Crew - an open world sports/racing title that features action on the ground and up in the air. Early impressions are looking positive, but we’ll have to wait until Riders Republic launches on October 28 to see if it succeeds in accomplishing that goal.

This preview is based on access to an early beta on PC, provided by the publisher. Riders Repbulic launches on October 28 on Xbox One, Xbox Series X, PS4, PS5, and PC.