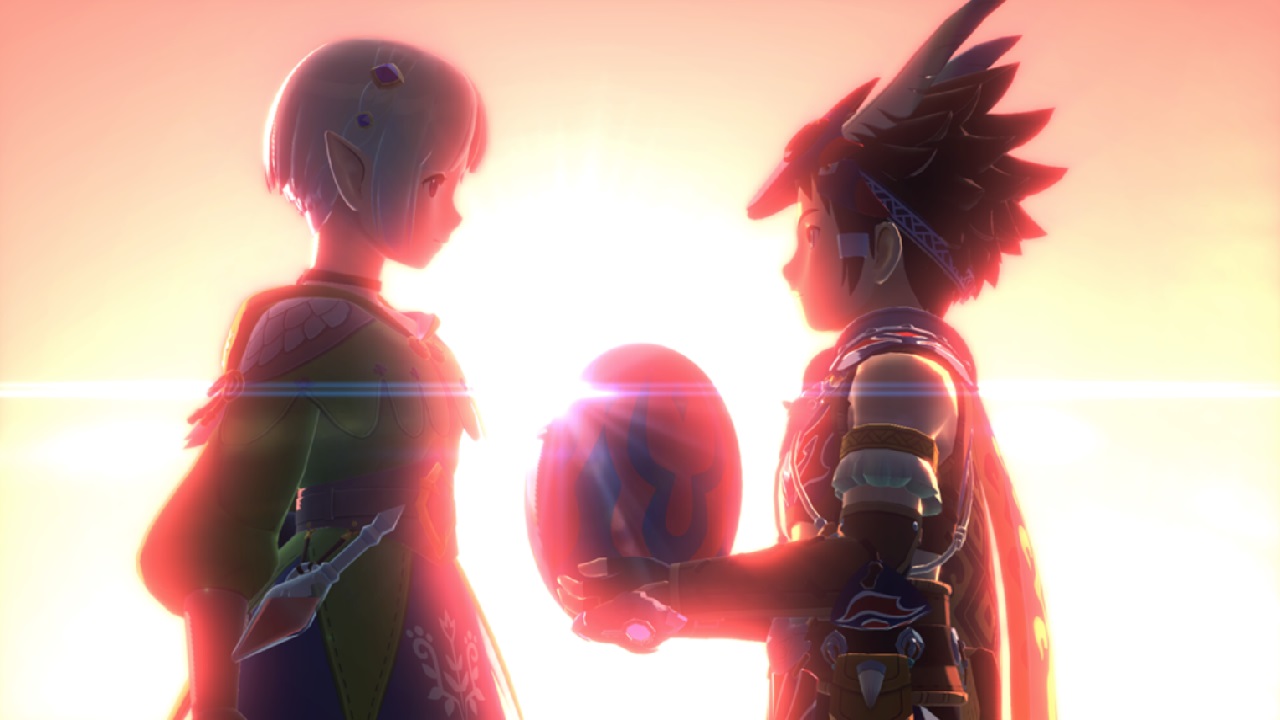 For the longest time, I have always thought that in some capacity, it would be so much more fun to befriend and ally with some of Monster Hunter’s myriad of creatures rather than always fighting and carving them into parts for stronger gear. Lo and behold, Monster Hunter Stories 2: Wings of Ruin somewhat answers my call. You’ll still fight lots of dragons and other wyverns in Wings of Ruin, but there’s both traditional JRPG and monster collection elements to that set it apart from the usual butchery in refreshing ways. I’d argue it’s a combination that longtime Monster Hunter fans and turn-based RPG fans ought to see for themselves, though the grind might leave some more action-craving adventurers wanting.

In Monster Hunter Stories 2: Wings of Ruin, there are groups of people known as Riders that interact so closely with wyverns that they are capable of taming them into faithful companions of exploration and battle. One such place is Mahana Village where a young rider’s grandfather, Red, once protected the island with the aid of the great Guardian Ratha. Red has since passed away, but Ratha still protected the island up until a strange occurrence turned the waters red and caused all Rathalos to vanish.

Soon, Red’s grandchild (the player character) is left with little more than the last Ratha egg and their own wish to protect it. However, a dark prophecy tells that the egg could hatch the terrifying Razewing Ratha, which is said to bring ruin to the world. The Rider finds themselves between their desire to their Ratha companion, the mystery of the red light that causes rage in monsters, and various groups who would see the Ratha destroyed before it can fulfill the prophecy.

Nonetheless, Monster Hunter Stories 2 has players venturing into a familiar world with vastly different gameplay. It's a grand adventure to get to the bottom of all the mysteries at work and keep the world from being destroyed, but also protect the special Ratha entrusted to them. It’s a pretty enjoyable story full of twists and turns throughout, not without its schlock and cheese. Still, I would say it’s not nearly as hammy as core Monster Hunter game narratives often get.

Not to mention, the game is rather pretty, even if cartoonish in this particular spinoff’s style. It definitely moves quite a ways away from the core Monster Hunter series that recently leaned more towards “realistic” looks. I think it’s to Wings of Ruin’s benefit as all monsters, characters, and environments look vibrant and interesting. It made me want to hug a baby dragon that would otherwise probably look far more mean and inhospitable in a game like Monster Hunter World. The only issue I had here is that sometimes Wings of Ruin was too busy for its own good. I saw some frame rate drops in cutscenes and during complicated attacks and movements while in docked TV Mode on the Switch. Strangely, it was more smooth and I didn’t experience much choppiness in portable play. Regardless, outside these occurences, I really like the robust look of Wings of Ruin throughout.

Surround yourself with Power, Speed, & Technique

The biggest change by far in Monster Hunter Stories 2: Wings of Ruin is the gameplay. This isn’t your typical wyvern hunt-and-slasher by any stretch of the imagination and this is likely where the game will become more interesting or fall apart for a lot of players. Wings of Ruin is a turn-based JRPG. You still travel the game’s environments searching out resources and monsters which can be seen on the overworld map, but you can’t fight them there. Instead, when you collide with a foe, you enter a turn-based RPG battle.

Battle in Wings of Ruin mostly boils down to a rock-paper-scissors of Speed, Power, and Technique. Nearly every move, whether basic attack or skill, falls into one of the three unless it’s a buff or special outlier. More importantly, Speed beats Power, Power beats Technique, and Technique beats Speed. Why does that matter? Because each monster has a pattern weighted towards one of the three styles and if you become familiar with it, you can exploit their weakness. If you or an ally and an enemy attack each other directly, you’ll end up in a Head-to-Head, and in this case, the winning attack style nearly negates the loser’s attack. For instance, if a Speed-type monster like Velocidrome goes Head-to-Head with a Power-type like Apotnath, Velocidrome will shred them.

At the most basic, this just means more damage, but there are a ton of other features that factor in. For instance, if two characters direct the same style of winning attack towards an enemy’s failing attack style, a double attack will occur instead of a Head-to-Head for even greater advantage. Furthermore, every winning Head-to-Head, successful attack, or skill that you or your partnered monster (Monstie, the game calls them) land builds up a meter. Fill that meter and you’ll gain access to hop on your Monstie’s back, powering up your attacks for a limited time. You can also unleash an ultra-powerful Kinship Skill based entirely on the monster you brought to the fight. That’s not even factoring in that some monsters have breakable parts, elemental weaknesses, and other factors that can be taken advantage of or that you can equip weapons like great swords, hammers, or bows to better deal with them. It’s a deceptively deep system that’s pretty fun to learn and strategize around to your benefit.

Of course, you’re going to need monsters for those double attacks and Kinship Skills. To that end, a large portion of Monster Hunter Stories 2 has you track down Monster Dens scattered across the open-world maps. Heading inside often presents you with a random maze that leads you to a nest. You can fight stray monsters and collect resources on your way or just go right for the nest. Once there, you can collect an egg that you can then hatch back at your stable. Each monster has different “Gene” traits of skills that can be rare to find and getting a particularly good monster is a delightful hunt.

Different Monsties also have overworld affecting skills, such as Arzuros’ ability to bring fragile boulders and Royal Luddroth’s ability to swim across otherwise impassable rivers. You can take five Monsties out into the field at any time and building your ideal stable of companions is a genuine treat of preference and functionality.

The only thing that bugs me about Wings of Ruin’s overall combat, monster, and ally systems is that you have little control over the actual actions outside of your main player character. You can change Monsties in combat, change your weapon, or make you or your Monstie use a special skill. However, they ultimately make AI decisions on basic attacks on their own, and sometimes they are bad decisions, such as a Speed-type monster suddenly using a Technical-type attack against a Power-type monster (something that, at worst, can kill them if the enemy is strong enough). I wish I had a little more control over the combat, but Wings of Ruin generally gives you what you need to make due, strategize well, win, and move forward.

Heck, I even have to give it credit for trying to ease the usual grind of constant JRPG encounters and Monstie leveling up. There’s a fast-forward function for combat that can be turn up to three times the speed for fast combat and you can skip flashy attacks entirely and get right to the resulting damage and next turn. You can even automatically defeat enemies if they are heavily weaker than you. Add to it that you can use repeatable side quests to level your weaker Monsties up quickly alongside your regular pack and Wings of Ruin goes a long way to eliminate the monotony of turn-based JRPG level and resource grinding. It doesn’t get rid of it completely, but I’d rather have these options than not.

Stories I can settle into for the long haul

Monster Hunter Stories 2: Wings of Ruin was an interesting experience. I really like the monster collection, raising, team attack, and rock-paper-scissors elements of the game. It’s also a visual delight that’s vibrant and enjoyable to look at and listen to at nearly every turn. I got hyped for big attacks that turned the tide, excited when I found an egg that I’d never seen before, and I really liked building my stable around any foreseeable situation. All of these things came together to create a very interesting spinoff. I am also well-associated with the grind of both typical Monster Hunter games and traditional JRPGs. Wings of Ruin hardly dodges that issue and isn’t without other slight problems, but it does do a lot to try to soothe it and I also appreciate that. I’ve longed to go on an adventure that gives me the chance to ally with the giant beasts I’ve been fighting against in Monster Hunter games for years. If you have too, I think you’ll find Monster Hunter Stories 2: Wings of Ruin is a more than rewarding experience with a decent story to keep the ride interesting throughout.

This review is based on a Nintendo Switch digital code provided by the publisher. Monster Hunter Stories 2: Wings of Ruin is available on July 8, 2021 on Nintendo Switch and Steam via PC.