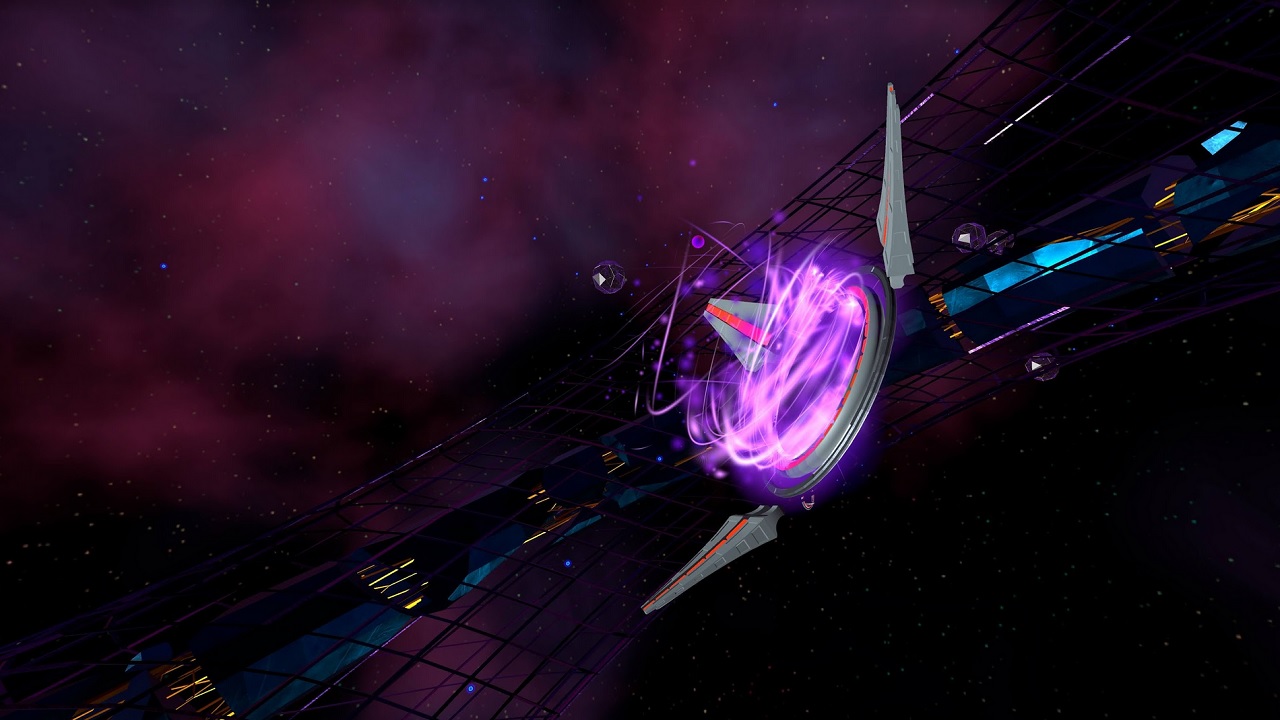 Straylight is an interesting proposition. It’s a virtual-reality platformer which tasks the player with swinging and flying around outer space courses on your way through checkpoints and a finish line. To do this, you use energy tethers to grab on to various anchor points and yank yourself around with everything from light to breakneck momentum. It might sound like a sweaty VR headache at first glance, but developer Dr Bloc has created a new Fling Engine it boasts will allow fast-paced platforming with relatively little typical VR motion sickness. Does it work? Well, I spent some time with an early access version of Straylight and can say that even after a lengthy session, I came away surprisingly less sweaty and nauseous than I usually do with these types of games, all while appreciating the challenge it promises.

Taking on the Straylight system

Straylight is presented to you as an obstacle course in the depths of space. In each level, you start on a platform and are presented with a course of anchor points you’ll use to yank yourself through an environment full of hazards and objects that mostly hinder your progress. You do this by way of the Straylight system. On each hand is a caster that can connect to any anchor point you direct its beam at to grab hold of it. From there, by yanking or otherwise moving your hand while holding the anchor point, you can build up momentum to fling yourself forth. In this way, you grab other anchor points and make your way through the course with checkpoints to give you spots from which to continue if you fall or hit a hazard. The goal is to pass through a bright finish line ring at the end of the course.

Hazards soon appear that start out as dark, metallic, and polygonal spheres, which will kill you if touched, forcing you to go back to whatever last checkpoint you passed through. The hazards get more intricate as you progress to later courses, including angular rocks and rings to pass through. There’s also gravity in this environment and if you miss grabbing an anchor point and fall to the bottom of the course area, you will also die and respawn. You could just go through each course as safely as possible, but there are also yellow cubes that are precariously placed and hard to capture. If you want to challenge yourself further, you can endeavor to collect them all for what the game claims will be worth your while.

In the background, some strange presence guides you along the Straylight courses, presenting it as some kind of Wipeout or American Ninja-type obstacle course challenge and sporting event. It also seems to take an eerie pleasure in your failure. Whatever the case, it keeps you aware of what you’re coming up against in each area of Straylight whether it’s the hazards to avoid, the cubes to collect, or just how the game works. Meanwhile, the levels in the preview were rather deviously designed, especially when I got to death spheres and other dangerous objects that started moving as I tried to get around them. It was, at times, frustrating, but the challenge was also satisfying to overcome as I learned to understand the game’s principles of what I can grab, where I can grab it from, and the momentum I could create for myself through regular tethering and yanking through the courses. Straylight can be very challenging, but the levels I saw were never unfair.

But… what about the motion sickness?

I fancy myself one with an iron stomach when it comes to VR games. Even so, a few too many hours of anything so movement-heavy will usually me sweat and my stomach churn. I also just came off a similarly momentum-based VR game in the form of Yupitergrad. Straylight has a lot of elements that remind me heavily of Yupitergrad (mostly the Spider-Man-like traversal and sci-fi themes), but there’s something Straylight accomplished that Yupitergrad didn’t for me. Straylight managed to not make me feel sick to my stomach after long play sessions.

Momentum-heavy VR platformers are very difficult to pull off and mileage and experience may vary when it comes to the comfort factor of Straylight, I admit. However, there was something very strangely smooth and agreeable about the motions of Straylight. It doesn’t feel jerky, even when you, the player, move erratically. The momentum and constant turning to lock onto your next anchor point and change direction didn’t feel like a spinning tea cup ride. In fact, direction carries through pretty heavily in your pulls and you have to provide similar momentum to really turn yourself. Ultimately, I played a lot of Straylight’s levels and found that despite frustrations with challenge, I never felt like I had to immediately get the headset off and give myself a bit to overcome any sickness.

Straylight isn’t without things I’d like to see improved. For some reason, at least on the Oculus Quest 2’s Touch controllers, the Straylight controllers are oriented vertical to your fist, instead of in a gun fashion. What this means is that you have to orient the straylight controls as if you were pointing a flashlight to direct the reticle beam to an anchor point. It sort of creates the experience of casting and pulling a rope, but I couldn’t find an option to change to pistol grip orientation and I think I’d like to see that eventually.

Meanwhile, the momentum of disconnecting your beam feels a bit heavy. That is to say when you let go of an anchor point, it feels like gravity drops you like a rock as opposed to keeping your Straylight tethered. There’s definitely some pass-through of motion if you’ve got some heavy momentum behind you before the release though. In fact, most of Straylight’s control of momentum feels like it does well to serve the purpose of keeping motion sickness away and that’s an impressive plus to me for a movement-heavy VR game.

Reaching for the stars

Straylight has already done something amazing even in early access for a game of this type: It introduced a very motion-heavy concept and has somehow figured out how to make it feel less uncomfortable. The courses themselves are challenging and you will likely hang your head with a sigh once or twice as you splat against one of its hazards, but it puts you right back at a pretty recent checkpoint and lets you try again almost instantly. I was impressed with how well Dr Bloc’s movement system prioritizes player comfort in Straylight while also offering that challenging platform experience. With the game set to come out of early access in a 1.0 launch later this year, there’s a handful of further things I still want to see. However, as things are, Straylight is a game that doesn’t feel like it will make many have to yank off the headset and let discomfort pass, if only just as often as usual.

This preview is based on an early build played on Oculus Quest 2 via Oculus Link and SteamVR and supplied by the publisher. Straylight is in early access now and is slated to launch fully on Oculus Rift, Quest, and Quest 2, PlayStation VR, Valve Index, and HTC Vive sometime in Q3 2021.