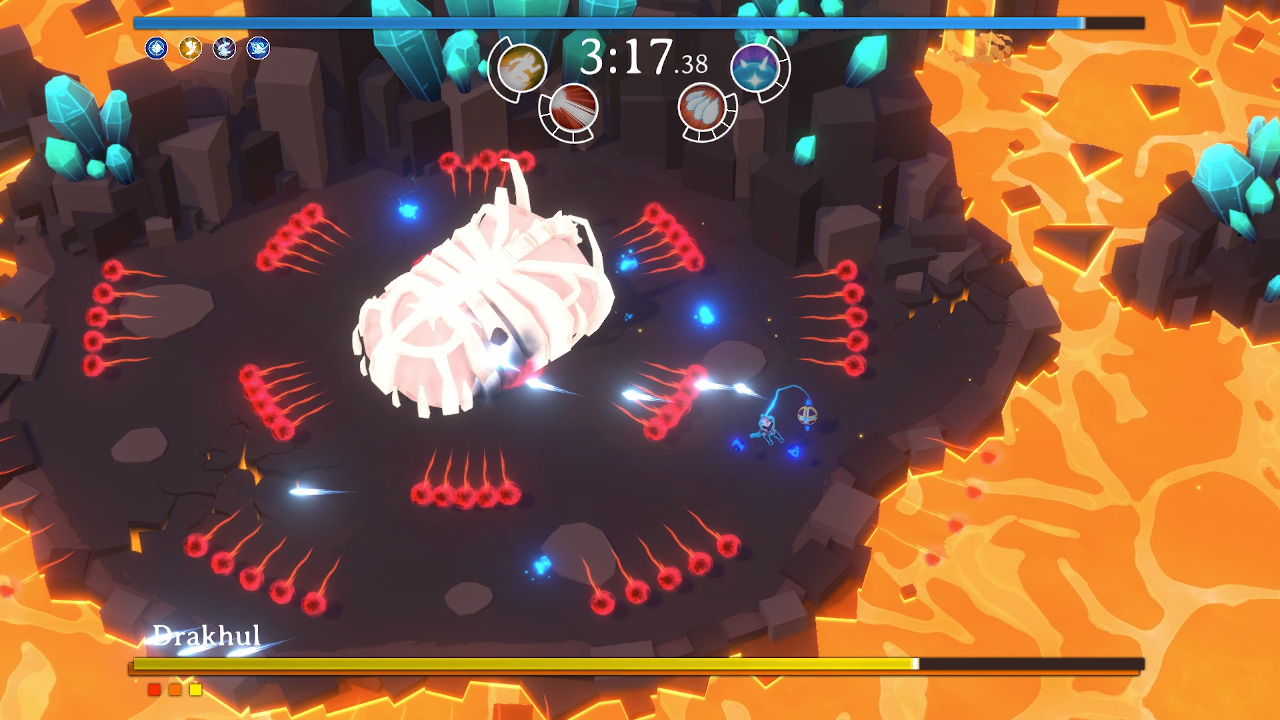 If the four words "bullet-hell boss rush" pique your interest, Godstrike will absolutely make you stand at attention. Firmly entrenching itself into a familiar arcade-like sized hole and refusing to come out, this new experience from OverPowered Team and Freedom! Games is fun, fast, and brutal. Time is now your most important resource, acting as your health in game and as your currency for new spells.

The twin-stick controls need little introduction, however, a short tutorial is included for any run-and-gun novices. With no time to waste, this game makes a quick and smooth first impression. Showcasing a simple yet pleasing art style accompanied by somber orchestration, Godstrike is a treat to behold. The basic bullet-dodging shoot-'em-up formula is enhanced with customizable loadouts, giving players choice over active and passive spells, greatly influencing playstyles and synergies. A roguelite-style mode is planned for players that need a little uncertainty in their hectic Godstriking. Online leaderboards to keep track of friends' scores and even Twitch integration for live viewer interaction round out the community features. These really help in making arcade-style speedrun-friendly games more appealing to everyone.

The demo provides a calm, serene starting hub encased in the cosmos, allowing players to familiarize themselves with four active and four passive spells for use. Over 40 spells total will be featured in the final game, but this sampling did well at whetting the appetite. A spread shot, beam weapon, teleporting dash, and projectile eliminating blast offered a nice mix of offensive and defensive options. The passive spells were a little more basic, with a speed and soul boost to aid in picking up much needed souls for your active spells. The remaining two passives protect the player from enemy fire, but only in a limited capacity. From here, it's a short step until you are teleported to the boss.

Being a "boss rush" style game, these encounters make up the bulk of the gameplay and have multiple attack patterns and phases. The Godstrike demo kicks the action up to an immediate 11 and never lets up. Faced with an enormous beating heart encased in ribs, this boss named Drakhul makes short work of teaching you just how hellish this game will be. Bullet patterns start pulsating from the oversized heart in rhythmic waves with increasing tempo almost immediately. Dispatching the organ will reveal a gigantic skull with extra spiked mandibles. Drakhul's second phase is frantic and overwhelming, but repeated play and smart spell use can see you through quickly to the final phase. With a gigantic pool of lava now in the playfield, space is tight to maneuver around the attacks of this demonic cranium.

I finally succeeded in vanquishing Drakhul after what felt like a hundred tries, and it left me wanting to try a hundred more on the next boss. Coming in Spring 2021, the wait for more Godstrike won't be long. If you love twin-stick shooters, bullet-hell style arcade games, or brutal roguelite boss rushes, Godstrike definitely belongs on your Steam wishlist.

This preview is based on an early Steam demo build provided by the publisher. The Godstrike demo will be available as part of the Steam Game Festival 2021 and will launch on Steam in Spring 2021.