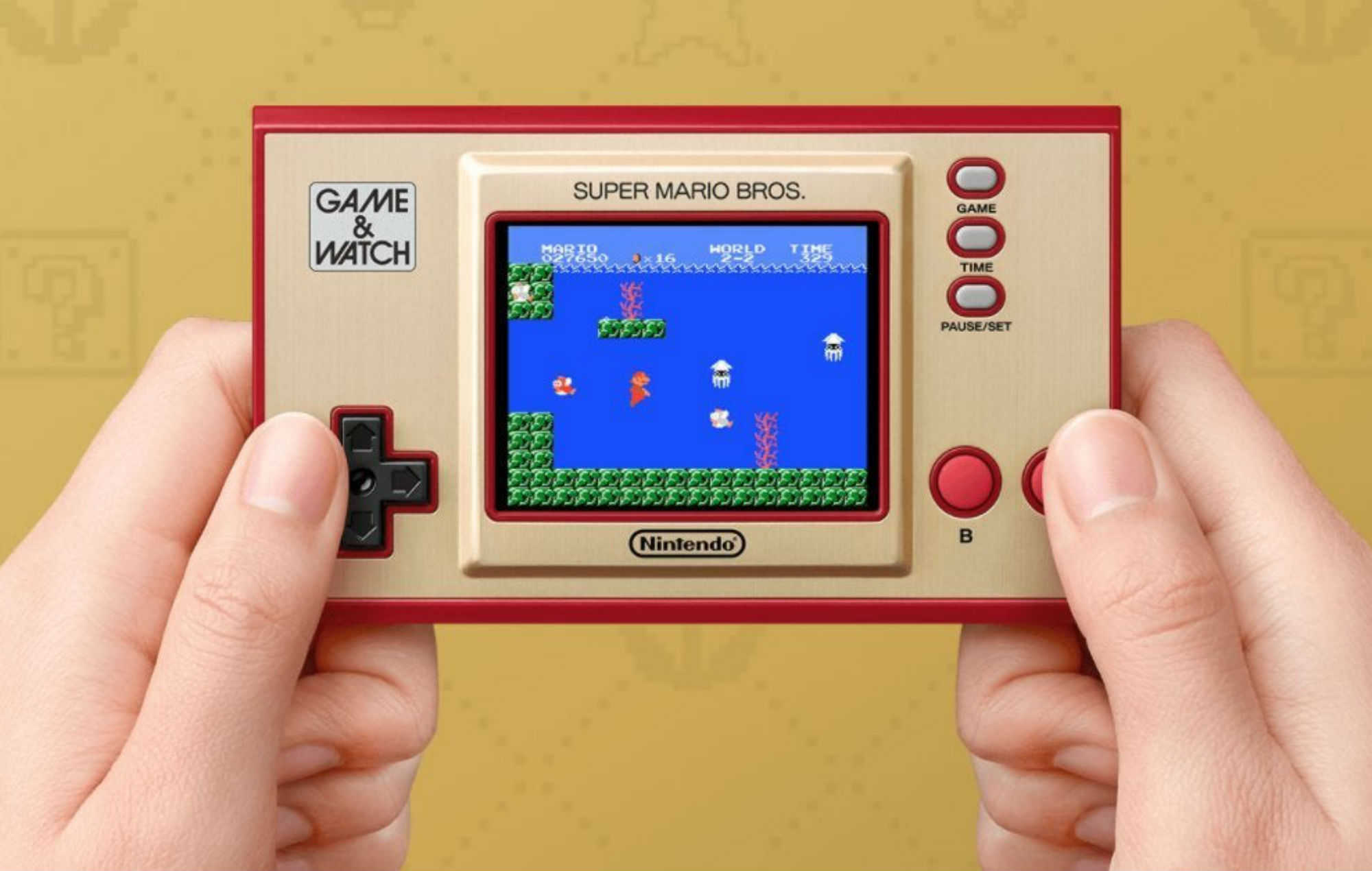 Way back in the day there was a store called Radio Shack (no relation to Shacknews), and while it’s name may imply the selling of radios, they actually sold a lot other cool tech gear. When I was a young child, the store was my first introduction to the world of portable LCD-based electronic games. They were very straightforward little games with varying themes like rescuing folks from a burning building by bouncing them off a trampoline to safety, or they’d be based on popular gaming franchises that already existed in more advanced forms. Among those little LCD handheld games, the Nintendo Game & Watch collection shined bright like a gaming beacon, taking full advantage of the popularity of Mario and their other characters. It’s been quite some time since Nintendo has manufactured such a product, but now, as part of Mario’s 35th anniversary celebration, the Big N has graced fans with a brand-spanking-new product that harkens back to the plumber's humble beginnings with the launch of Game & Watch: Super Mario Bros.

If I could turn back time

From the outside, Game & Watch: Super Mario Bros. looks almost exactly like the hand-helds of yore with it’s silver finish on the front and red plastic casing. Although there are a few notable changes here, the first and most notable being the fancy new 2.36 Inch-sized LED screen. There’s also the addition of a USB-C slot to charge the Game & Watch and a power button on the right side.

The D-pad and A and B buttons are fairly self-explanatory, and the three buttons labelled Game, Time, and Pause/Set respectively are also very straightforward. I was able to figure out how to get everything to function in way less than a minute. While it’s not hard to figure out how to hop between games, the watch function, and the very limited options for each, I’m still a bit surprised they didn’t include an instruction manual, even if just to play up the old-school vibes factor. A manual would’ve also been helpful for making sure I didn’t miss anything while exploring the Game & Watch: Super Mario Bros. features.

The actual game features of the Game & Watch are also very straightforward. The console comes loaded with the original Super Mario Bros. as well as the Japanese version of Super Mario Bros. 2 and the classic Ball game that most nostalgic fans associate with the original Game & Watch run, only now the character has Mario’s face. I’m pleased to report that they all run smooth as butter on the little hand-held. Another nice feature is that you can hop between games or the watch function and come back to a save state for whatever you’re playing. Controllable options are limited to volume, brightness, and ability to reset the game or set the watch time, but that’s more than you got with a pause screen back in the day.

If I could save time in a bottle

While it was great once again familiarizing myself with my favorite plumber and juggling balls for kicks, I have to admit my favorite function of Game & Watch: Super Mario Bros. is the watch itself. It’s like watching a little Mario aquarium. Various characters throughout the franchise’s history engage with Mario as he runs across the screen, including enemies like Koopa Troopas, Goombas, and Monty Mole and old friends like the various colored Yoshis. When it comes time to change the time, Mario will ceremoniously bash the time on-screen, which happens to be made out of bricks. As day turns to night so will the background on the Watch screen, and you can even catch some special events at certain times of the day. Players also have a few background options that they can swap out on the Watch to customize its looks.

Overall, it’s the little things that endeared the Game & Watch: Super Mario Bros. to me, like the adorable drawings that accompany the boot-up, power-down, and sleep functions of the device. And there are hidden secrets to find as well, such as the ability to play a song and video that teaches you how to draw Mario. I’m pretty sure the little box that marches along the border of the Watch screen with each second hides some secret as well, but I haven’t been able to figure it out yet. These little nuances really show that there was some time and effort put into the design of Game & Watch: Super Mario Bros. And that says something, because let’s face it, Nintendo really could’ve phoned this one in and people would still buy it like gangbusters.

Admittedly, I am sucker for stuff like this. I don’t think I’ll personally ever finish buying back my childhood until the day I die, but even I happened to find a small amount of fault in Game & Watch: Super Mario Bros. My biggest complaint was that hitting down on the D-pad wasn’t always as responsive as I wanted. The audio clarity was not consistent as well, often feeling like the placement of my fingers while holding the Game & Watch was muting sounds, or like the connection to the speakers was loose. And as TJ mentioned in his own Cortex review, the USB-C charging cable that comes packaged with it is rather short. The cable wasn’t really a problem for me personally, but that’s also because I am well-stocked as far as charging cables goes. Still, a nice long USB-C cable might be something that you want to pick up along with the hand-held.

So far my time with Game & Watch: Super Mario Bros. has been extremely pleasant, but as I noted before, I am probably this product’s key target demographic as a lonely single cis-hetero white male on the verge of his 40s who grew up as a Nintendo fan-boy and now has plenty of money to spend on their childless selves. Will it fill the dark hole inside my soul? I mean, probably not, but that shouldn’t stop you from enjoying Game & Watch: Super Mario Bros. Coming in at a reasonable price point of $49.99 US it’s also a great gift idea for the retro gamer or collector in your life.

This review is based off product provided by the distributor. Game & Watch: Super Mario Bros. is available now for $49.99 at various retail outlets.