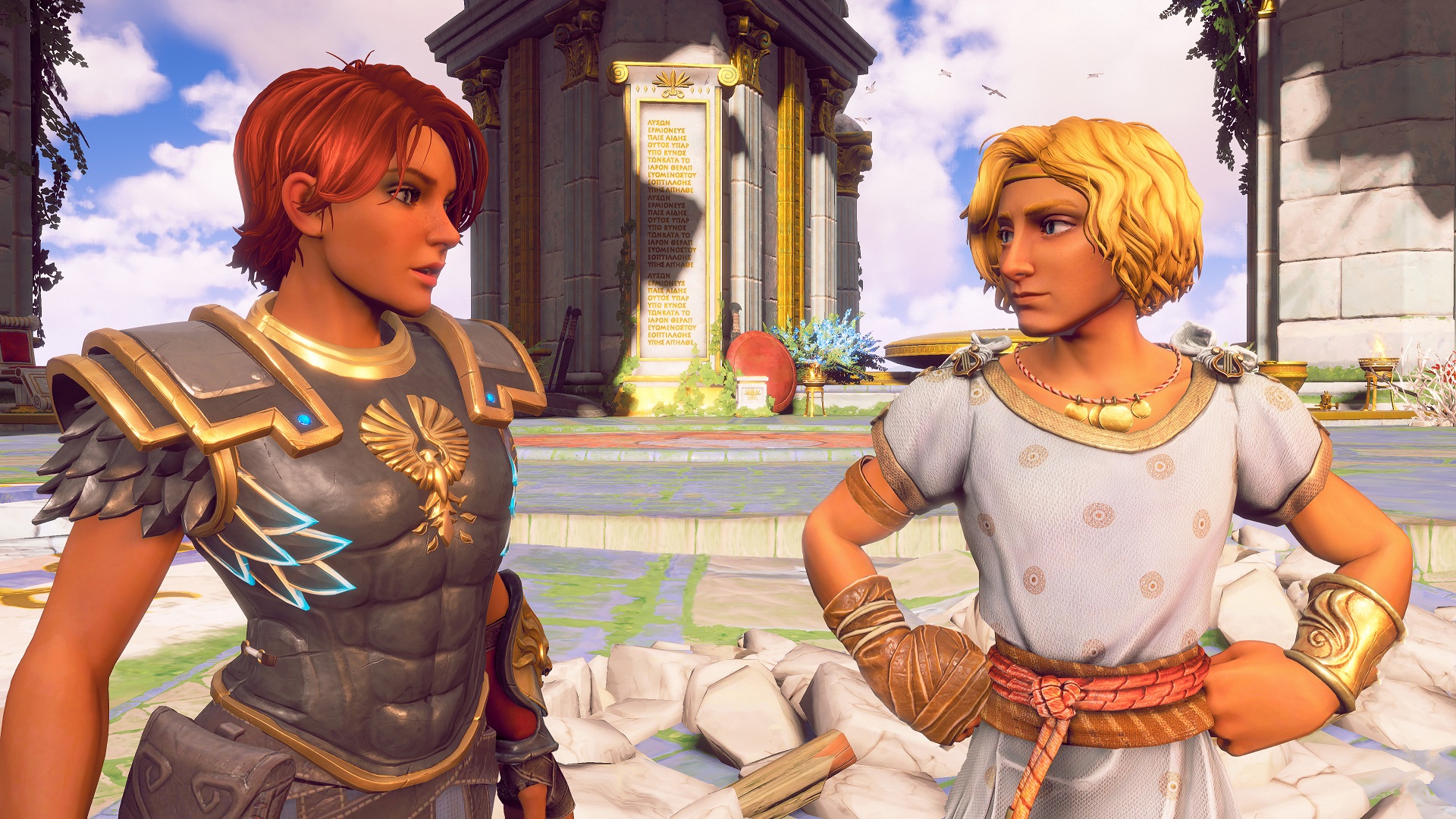 It's been a few weeks since Shacknews last had a chance to take a look at Immortals Fenyx Rising. The game formerly known as Gods & Monsters made quite the impression last time, showing off a grand open world, some engaging 3D platforming, and dozens of different quests. So we weren't sure what Ubisoft had to show off so quickly after our last hands-on session. Shacknews went hands-on again, nonetheless, and quickly found out that the next step in our journey into Immortals Fenyx Rising was to learn more about the game's story.

This hands-on with Ubisoft's upcoming adventure started at the very beginning, revealing a Golden Isle under siege by the mad titan Typhon. Instead of seguing straight into the game, a lengthy cutscene revealed Zeus venturing off to meet Prometheus, who was still in the middle of receiving his fabled punishment. Zeus asked Prometheus for his help in dealing with Typhon, who had broken the seal to the underworld, stolen the power of the gods, and banished them to an unknown fate. However, the imprisoned titan knew he would be no help. Instead, Prometheus made a bet with Zeus that the mortals would ultimately be the ones who could take Typhon down.

That sets up Immortals' main plot device. Players are then introduced to Fenyx, who could be made either male or female after a brief stint in the game's character creator. Fenyx washed ashore on the Clashing Rocks along the Isle of Hermes, the only survivor from their crew of soldiers, alone to deal with Typhon's rising forces. It doesn't take long for players to start collecting the various godly gear pieces that will help them along their journey, including the Sword of Achilles, the Broken Wings, and Apollo's Arrow. This is also where players will learn the basics of combat, which includes light sword attacks, heavy axe attacks, dodges, and parries.

It takes more than Prometheus' narration to get Fenyx started on this heroic adventure. As Fenyx runs through the various Vaults of Tartaros, the ones we became familiar with during our first hands-on preview, players will meet a mysterious thief. The thief is eventually revealed to be Hermes, who acts as a sidekick of sorts to Fenyx for the rest of the game. On top of upgrading Fenyx's Broken Wings to open up the gliding ability, Hermes also introduces players to the Hall of the Gods.

The Hall of the Gods acts as central hub world. This is where Fenyx can return to meet with Hermes at any time. It's also where players can access a number of upgrade stations. There are different areas where players can earn upgrades to different aspects of their character. There are several different currencies to manage in this game and they can all be spent on different things in the Hall of the Gods. For example, Ambrosia can upgrade Fenyx's health, Zeus's Lightning (found in the Vaults of Tartaros) can upgrade Fenyx's stamina, and the Coins of Charon can be used to learn new abilities. Players can also re-enter the character creator from here, if they so desire. The Hall of the Gods will be a key location at the beginning of the game, one that proves to be a handy fast travel spot. Of course, once the adventure opens up later, it becomes much less centrally located.

And open up Immortals does, because this is a massive game. This playthrough was only open to the Isle of Hermes and Aphrodite's Valley of Eternal Spring. Players can explore these areas as their leisure, finding full story questlines that span several missions, as well as sidequests, challenges, and Vaults of Tartaros. These are vast regions and the map won't be updated until players climb up a giant statue of one of the gods and finds a special vantage point, similar to sister series Assassin's Creed. (That's not entirely surprising, considering that Immortals comes from the team behind Assassin's Creed Odyssey.) The size of the world can be intimidating, but players can cut down their transport time by unlocking fast travel spots and by taming mounts. And as noted in our last preview, Fenyx's wings can be used to glide long distances, though this mechanic is limited to the player's stamina meter. In fact, much like a similar 3D platformer, The Legend of Zelda: Breath of the Wild, stamina will be a major factor for Fenyx and will determine how far the character can run, climb, or glide before running out of breath.

One interesting thing to note about our time with Immortals this time around was that after collecting Fenyx's initial equipment and completing the first batch of quests, the opening credits suddenly began to roll. That was at the two-hour mark, to which even Zeus exclaimed, "What? That was just the prologue?" This is shaping up to be a long adventure and Typhon's early forces, like a towering cyclops, are just the beginning of what will oppose Fenyx. Endgame encounters will see a seasoned Fenyx face off against legendary creatures, like the Harpy Queen and Typhon's top generals, like the corrupted hero Achilles.

I was surprised to see that after over four hours with Immortals, I had barely scratched the surface of what this adventure had to offer. Unlike the previous time I went hands-on with this game, I didn't even get lost in sidequests. The story itself looks like it will be a lengthy endeavor. And after hearing enough of Zeus and Prometheus' banter, I can at least say it'll be an entertaining one. In fact, all of the game's characters seem to be quip machines, each good for a few laughs.

It's hard to deny that Immortals Fenyx Rising (almost shamelessly) borrows from the Breath of the Wild formula. And there's certainly no denying that the story is reminiscent of Nintendo's Kid Icarus franchise. But having gone hands-on with this game twice, I also can't deny that I'm excited to see this adventure through from start to finish. Immortals Fenyx Rising is coming to PC, Xbox Series X, PlayStation 5, PlayStation 4, Xbox One, Nintendo Switch, and Google Stadia on December 3. Those interested in trying out a demo for the game can give it a shot right now on Stadia.