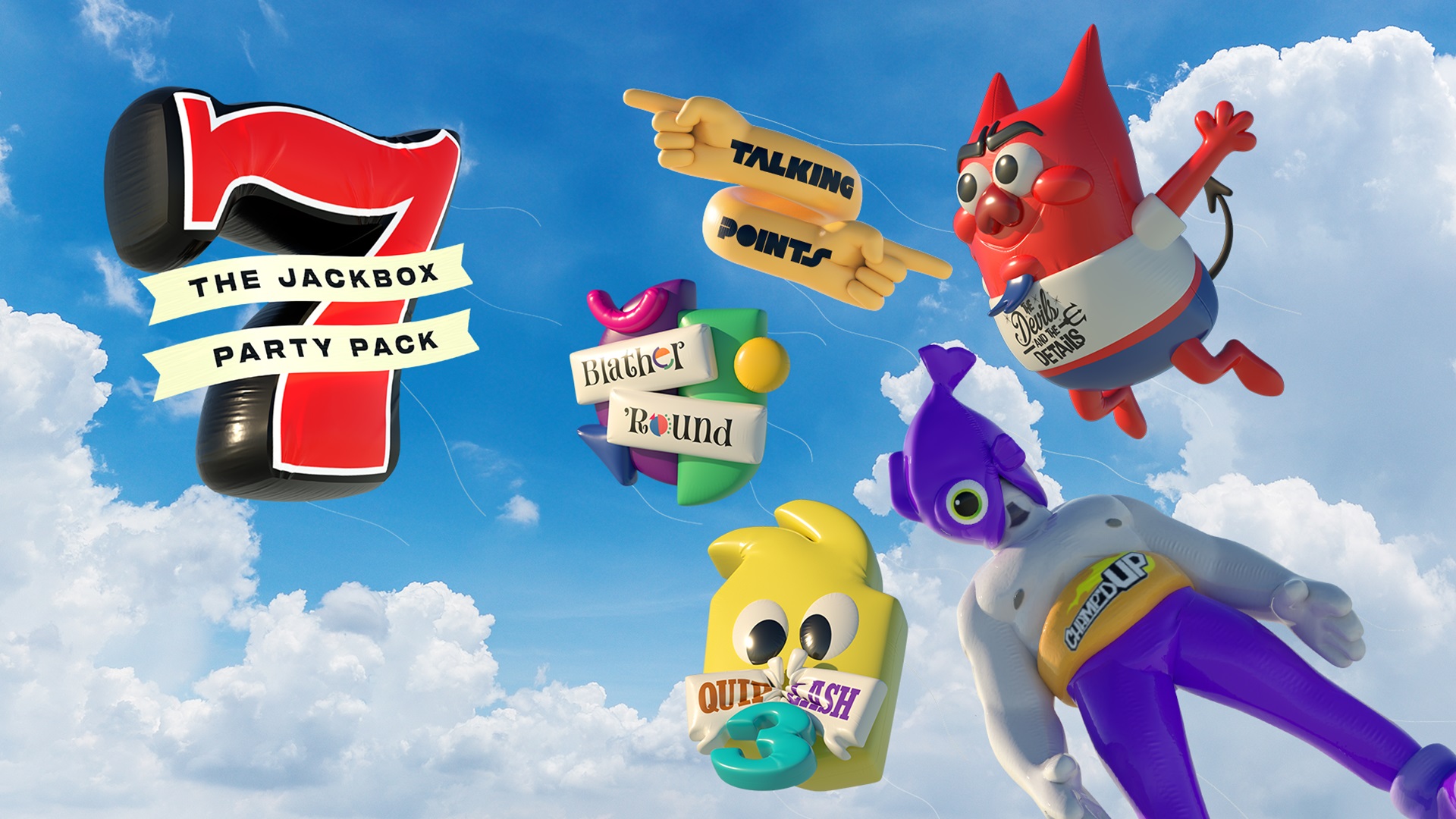 The Jackbox Party Pack has become an annual tradition. Around this time each year, the team at Jackbox Games comes together with a fresh batch of multiplayer party games. Arguably, these collections have never felt more critical. With many people staying home due to the continuing COVID-19 pandemic, the Jackbox collections have become a reliable way to have a fun evening with friends and family. It feels like there are more eyes than ever on The Jackbox Party Pack 7, especially considering the tough act that Jackbox Games has to follow each year.

The Jackbox Party Pack 7 is another fun batch of games, albeit with a bit of a caveat. They're fun games, sure, but many of these games require a degree of skill. If you have that skill, these games are a lot more fun. If you don't bring that skill to the table, the games aren't quite the good time you'd hope for.

Often times, each Jackbox Party Pack's headliner is one of the team's reliable staples. In the case of The Jackbox Party Pack 7, it's the third iteration of Quiplash. Those who have played Quiplash should know what to expect by now. The idea is that players are given a question or a fill-in-the-blank prompt and the idea is to come up with witty responses. The questions then come up on-screen and players choose between one of two provided answers.

With close friends or family, Quiplash 3 holds up as well as its predecessors. There's room for inside jokes, clever retorts, and barring any of that, there's always the option to have the game provide an answer for you in exchange for a smaller score. The revamped final round has players come up with three answers, as opposed to one, making things a little trickier. Unfortunately, comedy doesn't always come in threes, so coming up with three good answers to a question can be harder than it sounds.

While Quiplash 3 doens't bring a lot of new rules to the table, it does add enough new features to make it feel fresh. Players can now come up with custom episodes, so if you're playing with family, a close circle of friends, or with a Twitch community, you can customize a Quiplash 3 session to suit your group. Players will also find featured sessions that give friends (and Twitch streamers) reason to come back and make Quiplash into appointment gaming.

The Devil and the Details

Of the five games featured in The Jackbox Party Pack 7, The Devil and the Details comes across the most like Jackbox Games going out of its comfort zone. This is both a cooperative game and a competitive one. This is centered around a full team of players living together as a group of devils and trying to blend into the world as a human family.

The object of the game is for players to complete various chores around the house in a single day. The collective must hit a score threshhold in order to move on to the next day otherwise they receive a failing grade and the game ends with everybody as losers. The chores are basically mini-games that require tapping, rotating, swiping, and other actions that can be done on your device. They all have a point total attached to them and help the collective hit the point threshhold needed to advance, though the chores with higher scores attached to them require more than one person to tackle them as a team. There's another way to hit higher point totals and that's by hitting "selfish" tasks, which reward higher points, but fill a Selfish Meter that can stop the family's progress if it gets filled all the way.

There's heavy strategy and teamwork required to win at The Devil and the Details. It's possible to take on solo tasks and still contribute to the group, but at the end of the day, it's still a competition. Individual players will still look to score higher than everybody else and there are two ways to do this: By working with others and by taking a chance with selfish tasks. It's worth asking by the end of the game if it's worth taking a chance on a selfish tasks in order to come out on top, even if it means potentially sinking the whole group.

The downside to The Devil and the Details is that it requires a cohesive group and a lot of communication to work. If you don't have a talkative or particularly active group, it won't have a lot of staying power. But if you have a close-knit family or tight group of friends, this can be a lot of fun and worth revisiting to try and finish with an "A" grade for the team.

Champ'd Up has a great potential for laughs, but it's ultimately going to depend on a few factors. Champ'd Up requires players to draw their own mascots, ones they think will win in a head-to-head battle in a certain category. One of their mascots is a champion and the other is an underdog, who will be pitted against a different player's champion.

The fun in Champ'd Up comes in the wacky categories and in the custom characters created to fight. The issue is, it's much more fun for people with artistic talent. If you're somebody like me who can't draw anything outside of crude stick figures, enjoyment feels a lot more limited. The other issue involves players who are artistically talented. The group I was playing with would occasionally ignore the premise of voting for "who would win the battle" and vote in favor of the best drawing.

I spent a chunk of the weekend playing Champ'd Up as a part of Twitch audiences and the potential for fun is certainly there. I personally didn't enjoy it when playing with my own group of people, but if there are good artists around, the games can get a lot wackier and get a lot more laughs.

If there's a dud in the Jackbox Party Pack 7 bunch, it's going to be Talking Points. This game is mainly about giving faux TED Talks about a topic provided. A second player is assigned to be the presenter's assistant and provides random slides. The presenter must ad lib when presented with a slide and fit it into their speech, seamlessly building to the presentation's conclusion.

Talking Points is entirely reliant on having good speakers, but also good speakers that can think on their feet. If you have a shy person on the team or one who isn't really adept at improv, it makes this game much duller. And finding a full team of people who are suited for speaking and improv can be tough. It's even hard to find that on Twitch, which means it isn't even an ideal game to stream.

There was a lot of confusion with the scoring and a lot of quiet presentations in my time with Talking Points. It was easily the low point of my time with this Jackbox collection.

Blather 'Round is this Jackbox compilation's guessing game, where players select a category, including an "Easy" one. The players are then given a fill-in-the-blank clue and can only fill it in with words provided by the game. That leads to a lot of frantic guessing, especially since the other players do not have a limit on how many times they can guess. The one presenting the clue can continue adding clues, including ones playing off of previous guesses. Again, however, additional clues can only provided with words issued by the game.

There's an incentive for both the presenter and the guesser, as both parties score points for a correct guess. That gives this game an exciting fast pace. It also leads to a lot of laughs when it comes to wrong answers. If there's a weakness to Blather 'Round, it's that it's a straightforward two rounds and there's no final round. That's true of other games, like Champ'd Up, but Blather 'Round is begging for one last lightning round of sorts to determine a true winner. Give this game a strong finish and it's the breakout game of the collection.

The Jackbox Party Pack 7 is a winner of a collection, but it's not the blowaway compilation that past ones have been. Quiplash 3 is an easy winner, mainly because it adds to an already successful formula. Blather 'Round's biggest weaknesses are a lack of a strong final punch and its limitation to six players. Champ'd Up and Talking Points are games that need a very specific set of players to have fun, which is a stark difference from many of Jackbox's previous offerings that carry a more universal appeal. The Devil and the Details is another game that mainly works with a specific set of players, but I have to say that I admire Jackbox Games making this particular attempt to craft something that requires cooperative teamwork and still has a competitive element.

The Jackbox Party Pack 7 isn't the best of the bunch, but it's still a solid game night for anybody looking to pass the time with friends and family that they don't get to see as much these days.

This review is based on a PlayStation 4 digital code provided by the publisher. The Jackbox Party Pack 7 is available now on Steam/The Epic Games Store, the PlayStation Store, Microsoft Store, Nintendo eShop, App Store, and Amazon Fire TV for $29.99. The game is rated T.