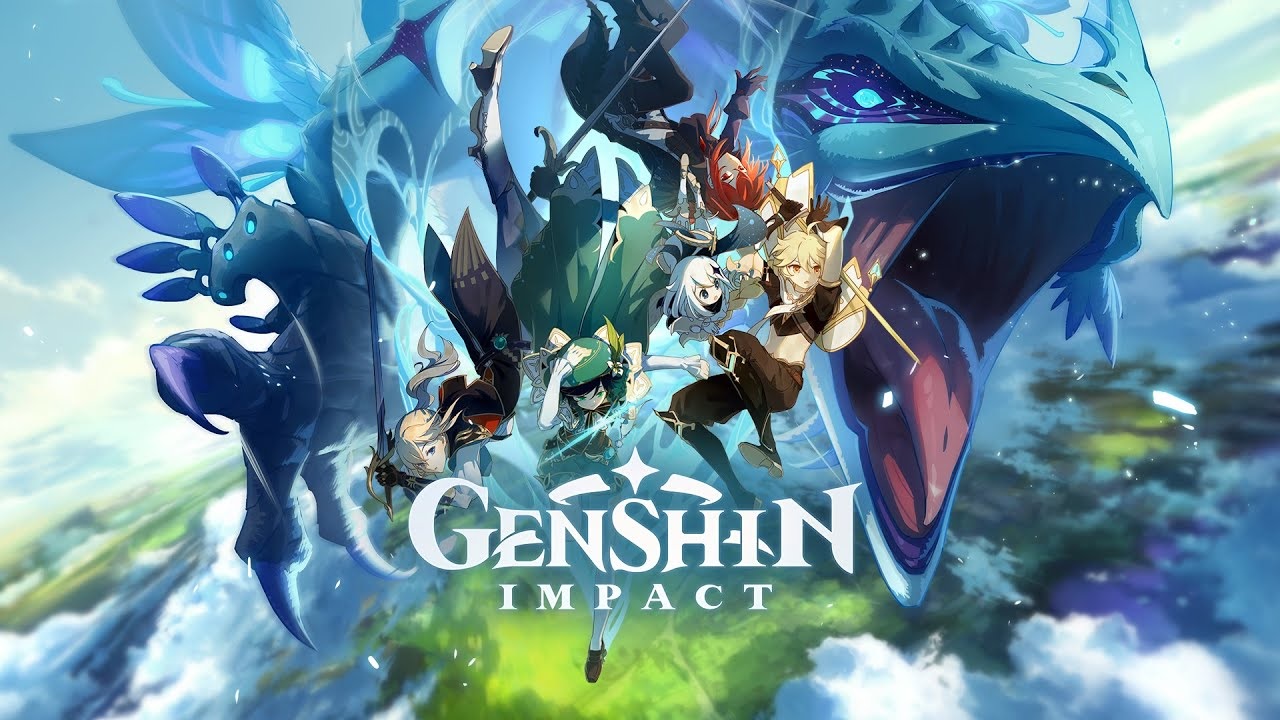 Genshin Impact Impressions: Going beyond Breath of the Waifu

Zelda clone. Breath of the waifu. Monetized gacha cash grab. It’s easy to make these generalizations of Genshin Impact. The game wears its inspirations on its sleeve after all. But those labels are just what they are: generalizations. It doesn’t take long for Genshin Impact to find meaningful ways to set itself apart from the games it draws from. More than that, it thoughtfully takes the things that are good about those games and uses them to craft its own alluring path as a free-to-play adventure. Surprisingly, it often succeeds at being truly free-to-play too, only sometimes muddied by the constant presence of its obvious and alluring monetization systems.

Entering the world of Teyvat

Genshin Impact’s overarching story is passable. Players take on the role of one of two celestial siblings that come into battle against another being of overwhelming power. After choosing which one of the siblings you will play (male or female), the other is captured by the being and your chosen character is flung into the world of Teyvat and stripped of all of its power. It isn’t long before you discover Paimon, a small magical companion who joins you on a journey to rediscover your power, escape the confines of this new world, and find your sister. Teyvat has its own problems though. A dragon known as Stormterror who was once the guardian of a local area known as Mondstadt has become ferocious and turned against the land it once protected. To this end, the player finds themselves enlisted by Mondstadt’s Knights of Favonius to aid in bringing peace and stability back to the land.

Once the pomp and circumstance are settled, Genshin Impact sets you on your way to really do as you please. This is where the first comparison of many to Breath of the Wild can be made. The land can pretty much openly be explored with the only barrier being that of level as further and further enemies from Mondstadt will become strengthened and overpowering. That said, you’ll discover waypoints and sections for which you can unravel further reveals of the world map and teleport between as you continue your questing and exploration.

Even so, as you go through bits and pieces of the main quest, you also collect characters, which you can freely switch to at any point you choose. This is where the game begins to set itself apart. Every playable character has their own level, equipment, attacks, special moves, and more. They all play differently enough that it’s very easy to develop an affinity for which one you like best as you travel through the world of Teyvat and unravel its vast mysteries. Different characters and gear are also where the game’s monetization system comes into play, but we’ll get to that later. For what it’s worth, Genshin Impact’s acquisition of characters and, by extension, capabilities, is what really makes it start to stand on its own two feet.

A world of magic and elements

Speaking of capabilities, one of the other most notable ways Genshin Impact sets itself apart from its inspirations is in its use of elements. Each playable character in Genshin Impact is associated with a certain element. Your main character commands anemo (wind). There are also pyro (fire), geo (earth), electro (lightning), dendro (nature), hydro (water), and cryo (ice). Each of these elements have a special effect on the environment, its inhabitants, and other resources. Obviously, pyro will light grass and wood aflame, which can be used to destroy enemy wooden shields or path-blocking foliage. Meanwhile, electro will chain between enemies or electrify water sources to damage anything caught within them.

Genshin Impact certainly didn’t invent element/environment interactions, but it does cleverly employ them throughout the player’s constant engagement with the world around them. For example, the main character has a super move in which they use their sword to create an area-of-effect tornado. If an ally with, say, a pyro element sets fire to an area and then that tornado passes through it, it will become a flaming vortex that does dual wind and fire damage to everything caught within - an outcome I discovered by sheer accident in the heat of battle. Genshin Impact’s elements interact with each other in ways that allow the player to be very imaginative with what their characters are capable of.

And there are plenty of areas in which to employ them as well. Teyvat is filled to the brim with dungeons and other special areas full of quests to explore. Dungeons themselves will usually require players have a quest going on there until you raise your adventure rank up to a point where certain quest instances can be done at your leisure, but it doesn’t keep you from having plenty to explore and engage with as you continue to level up your characters and gather rewards from the main game.

The perils of Genshin Impact’s style

Now I will start this section by saying that pretty much everything above can be done for free. Genshin Impact doesn’t make you buy a dang thing to move forward through hours upon hours of its main journey. That, however, doesn’t mean that those systems aren’t there, and Genshin Impact also isn’t shy about reminding you of them, as any free-to-play game would. The first instance of this game’s monetization systems come in the form of Wishes. Wishes allow you to spend currency gained by either questing or purchasing to roll for a random assortment of the game’s weapons or characters. There are rarities to both running from one to five stars (five-star equipment or gear being the rarest).

To help you break that down, I will mention that you must use a Fate currency to purchase a single Wish, and they cost 160 Primogems, which can be earned in-game or converted from a purchased currency at 60 for a dollar or more when buying in bulk. That means at 1600 Primogems, you’ll get one special pull (essentially 30 bucks spent). Even at the best price (6480 for $99), you’re looking at four pulls of 10 wishes. If you wished to buy your way to a five-star character and had bad luck (thus requiring 14,400 Primogems), it would take around $230 to get there. Otherwise, you’re just going to have to rely on the abysmal 0.7% drop rate on five-star gear and characters to come through for you.

That said, Genshin Impact isn’t completely cruel. It takes a first-hit-is-free approach and is pretty forthcoming with using quests and exploration throughout the game to reward you with Primogem and Fate currencies. On the other hand, it also takes the effort to try to entice you with trial plays of rare characters you could be playing if you’d just fork up some dough. These are interesting looks at some of the game’s premium characters, but it’s hard to respect it as much when I know the primary purpose is to get me to try to buy them.

Genshin Impact also has a seasonal Battle Pass. As usual, there are free and paid premium tracks of rewards you can earn by leveling up the pass, and here I will be lenient, because it doesn’t try to get you from the get-go. You actually have to play your way up to a rather deep stage of the game in order for the Battle Pass to even become available to unlock, let alone purchase. Even then, if you do make a purchase, it’s a reasonable series of unlocks featuring character leveling items, Wish currencies, and even a choice of high-powered weapons once you get to a certain level. All of these things combined for the premium Battle Pass price make them cheaper than what you’d spend to buy them on their own. The gacha system of this game feels insidiously built towards convincing you to gamble at every stage of the game, but the fact that you can play hours upon hours of Genshin Impact without spending a dime on any of this is still worth noting. It really can be free to play for a long time. You just have to resist temptation.

More of a bellow than a breath

Genshin Impact is a curious commodity for a lot of reasons. MiHoYo knows its way around creating gacha games and it could absolutely throttle players with far more predatory systems if it wanted to. That said, a massive bulk of Genshin Impact is really and truly is free to play. Yes, it borrows heavily from games that inspired it like Breath of the Wild, but it also uses unique characters, in-depth elemental interactions, and other fun systems to set itself apart in good ways.

Does it always get it right? No. I’d argue its constant advertisement of a very stingy gacha system is annoyingly typical of this type of game, and MiHoYo’s status as a developer in the Chinese mainland means Genshin Impact has already and will likely continue to come up against some rough political decisions in order to remain playable. But as far as free-to-play games go, this one is arguably among the most generous, engaging, and genuinely enjoyable among the bunch and can be played for hours on end without spending a dime. Whether you see it as free-to-play Zelda or something more, it's arguably worth the starting price in a lot more ways than not.

The experiences and opinions expressed in this feature are based upon access to the PC edition of the game with premium currency supplied by the publisher. Genshin Impact is available to play now on PlayStation 4, mobile devices, and PC via the game's website.