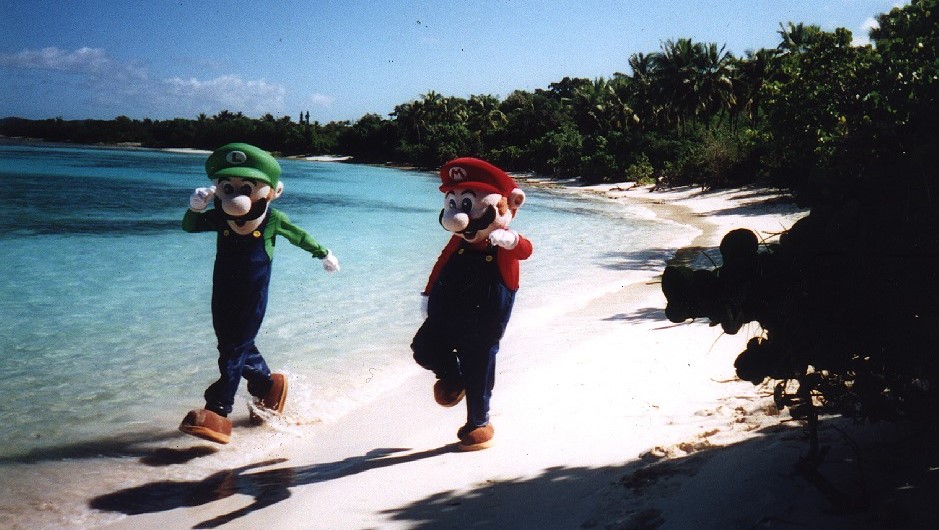 To honor the release of Super Mario 3D All-Stars and the long-awaited re-release of Super Mario Sunshine, we reached out to Mario. By that, we mean we reached out to Tim Lawrence from KCL Productions, the man behind the Mario costume. (Fun fact: We didn't learn he was actually the Mario actor until halfway through the interview.) We discussed the making of the Super Mario Sunshine commercial and what went into bringing Mario to life.

Shacknews: When did Nintendo first approach your team about the Super Mario Sunshine commercial? Do you remember the original pitch?

Tim Lawrence, KCL Productions: We were actually approached by Nintendo's Ad Agency, Leo Burnett. Not a complex thing, although a bit of a stunt with hanging from a crane. The Prop Department handled the rig and we built Mario to just do his thing.

Shacknews: That wasn't the first time you had worked with Nintendo. There was also that old Super Smash Bros. 64 commercial from back in the day. So for Sunshine, was it a simple matter of dusting off the old Mario costume or did you put together a fresh costume for this?

Lawrence: Each spot had a completely new Mario, as he had to achieve different things. Also, Nintendo wanted them to improve. [It was a] straightforward build, as all they had to do was fight a bit. No custom work, other than flexibility. Pikachu was the hardest to achieve. But Sunshine was a walk in the park (literally) as all he did was stand there and then get hung. Super Smash was literally smashing each other.

Shacknews: But you did absolutely need a F.L.U.D.D. backpack to make this work. What was it made out of and how long did it take to assemble?

Well, honestly not sure what a F.L.U.D.D. is. But if you're referring to the jetpack, it was a mishmash of found parts and built parts. Don't remember exactly how long it took as we built everything together at once. But that overall build took about a month.

Shacknews: Where did you originally film the commercial? What specifically did you need for a filming site?

Lawrence: Sunshine? It was shot at a park in Vancouver. Most of the commercials were shots there except for Super Smash and shooting in the Virgin Islands. We went to Vancouver about 30 times overall.

Shacknews: What was the process of setting up the "hovering" effect? And when your Mario actor showed up to the set that first day, did he ever expect to have to leave the ground?

Lawrence: So to be clear, I am and have always been Super Mario for all the spots. And yes, I knew exactly what I was getting myself into. Everything was planned and I've done many stunts in the costume. There was a large crane that hoisted me up and I hung there for a couple hours. It was cool.

Shacknews: What were some of the challenges that came up when filming?

Lawrence: I was always impressed with how professional everyone was on a shoot for Nintendo. From the top down, we all had fun and it was just silliness. The biggest challenge was always getting the costumes through Customs at the airport. But generally without incident. But filming always went well and Sunshine was no different.

Shacknews: Roughly how long did it take to film the commercial?

Lawrence: This one took about a day. Most of them were 1-2 days except Smash Bros which was only half a day.

Shacknews: How does it feel whenever you see that Super Mario Sunshine come up in any kind of discussion? I know people still remember that jingle.

Lawrence: It certainly puts a smile on our faces. So grateful that people enjoyed them that much. We've done a lot of stuff over the years with Ellen DeGeneres, Universal, and many others, but no one is more passionate than Nintendo fans.

Shacknews: It's been a very long time since those old Nintendo commercials. What has KCL Productions worked on since then?

Lawrence: Well, we've literally built thousands of costumes, but we've shifted gears as there isn't a call for costumes as much anymore. Especially with COVID, but we started a coloring book company about four years ago that's doing really well. Books are on Amazon, as well as an Etsy store that features all kinds of "Kustom" work that Kathie is doing based on her years in costumes. So we're not lacking in things to do between the costumes, but still building something for Buddy Cruise right now also. So we're super busy all the time.

Shacknews: Would you be open to working with Nintendo again if they came calling?

Lawrence: Of course, although pretty sure those days are over as the regime has changed hands many times. Everyone we worked with there is pretty much gone. But yes, we'd love to built Mario and travel to some exotic location. Who wouldn't?

Super Mario 3D All-Stars is available now on Nintendo Switch for a limited time. To learn more about the company behind the Super Mario Sunshine commercial, as well as several other Nintendo and non-Nintendo commercials, visit the KCL Productions website.