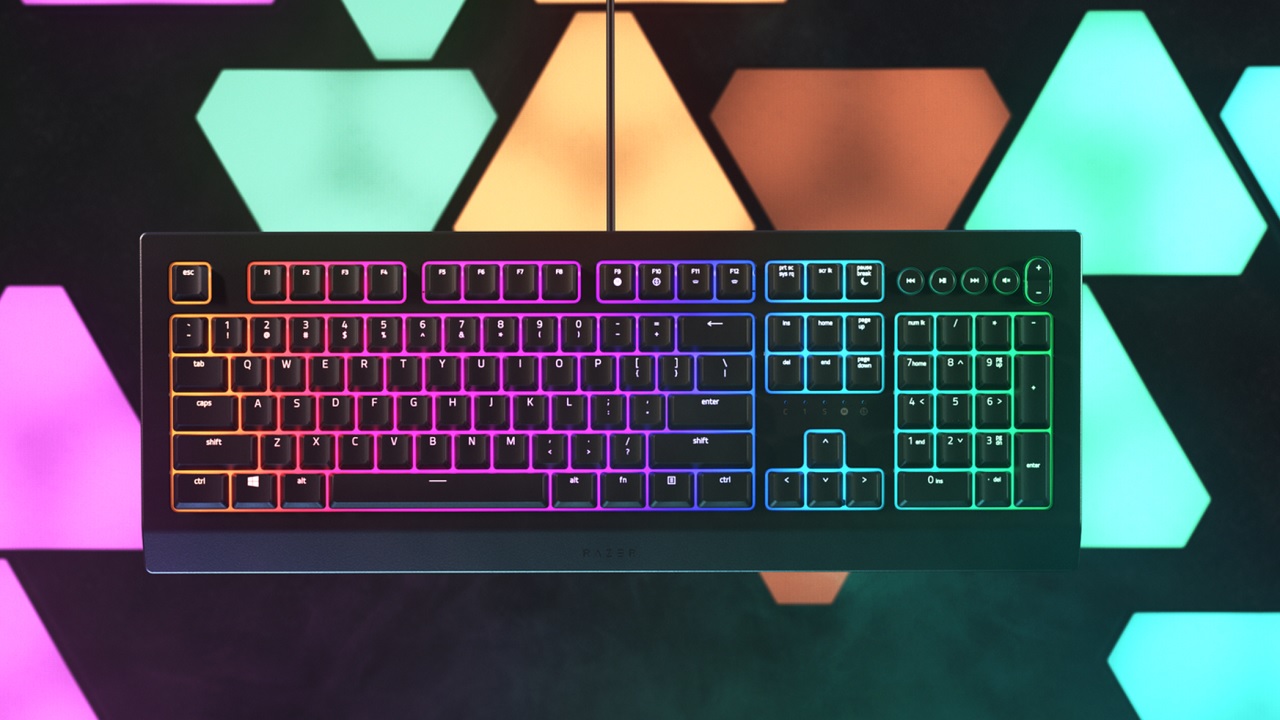 The original Razer Cynosa keyboard was a very acceptable pathway into gaming keyboards for the cost-concerned player. Thanks to its budget price, RGB lighting, and customizable options, Razer has boasted the Cynosa as one of the bestselling membrane keyboards in the United States. The Razer Cynosa V2 aims to take that winning foundation to the next level with a new generation of the wallet-friendly, entry-level gaming keyboard, and while it keeps a few features that players might not enjoy, the Cynosa V2 also brings along a number of improvements that make it a meaningful upgrade to its predecessor.

Let’s jump right into what sets the Razer Cynosa V2 apart from the original. Right off the bat, it’s worth noting that the Cynosa V2 has a dedicated row of media keys arranged above the numpad. Rewind, pause/play, fast-forward, mute, and volume switches offer users easy access to music and sound functions on the fly. The switches seem to work without any fuss on most music apps, including Windows Media Player, Spotify, and iTunes and are a handy way to raise, lower, or mute volume regardless of what else you’re doing, in-game or not.

One of the big new features of the Razer Cynosa V2 is its ability to sync up to the new Razer Synapse 3 app. Synapse 3 feels vastly improved over the previous Synapse app and allows players to explore a wealth of customizable options, such as function reassignment, macros, and even individually lit key backlighting.

That brings us to the RGB, which looks to be a solid improvement on the Cynosa V2. By default, it cycles colors across the whole board, but you can customize the lighting pretty thoroughly. You can actually customize it key by key if you want, or you can go into Razer Chroma through Synapse and add interesting effects. With a little experimentation, I was able to add a ripple effect that would spread warm red color from any given key I struck that traveled across the whole cool blue-colored board, which is just fun. The only shortcoming here is that it seems some of the colors in the spectrum are understated or just don’t come through well in translation from Razer Synapse programming to the keyboard.

If you don’t feel like doing a great deal of customization, there’s a good chance to the Cynosa V2 has you covered depending on your favorite games. This edition of the keyboard features support from the Chroma Workshop, which has integrated RGB support for over 100 games, including Gears Tactics, Apex Legends, Remnant: From the Ashes, Fortnite, Overwatch, and much more. I cycled through a few of the games and found it interesting the way the Cynosa V2 responded to each supported option. All-in-all, it’s a pretty good collection of new features for the V2.

Building on the functional Cynosa foundation

Outside of the main additions to the Cynosa, there are a great many foundational features that remain. Some for better, some for worse. It’s still a membrane keyboard, which means squishy buttons and may turn some users looking for a snappier touch off. Moreover, one of the first things I noticed when I first started tip-tapping on the Cynosa V2 was that the keys felt like they had just a little bit of wiggle at the top. It’s not that they’re horrible loose or feel fragile, but there’s something about that slight wiggle that makes me wonder if this is a place the Cynosa cut some costs.

Even so, the keys are functional and reactive, and the keyboard is spill resistant, offering some peace of mind if you ever splash the keyboard by accident. Despite the previously mentioned wiggle, the keyboard also handled a wealth of use and mashing with satisfactory durability. One other convenient feature of the keyboard is built-in cord routing option. The Cynosa V2’s cord is built into an alcove underneath with various canals that allow you to attach it straight out, curved to the left end, or curved to the right end of the keyboard, which is just great for keeping that cord out of the way and reducing clutter.

The original Cynosa was built to offer players a reasonable entry point to RGB and gaming keyboards. It did well to set that foundation for Razer’s more affordable line, and the Razer Cynosa V2 built upon it well. The added features of usable media buttons, Synapse 3 integration for easy customization, per-key RGB, and Chroma Workshop game integration to name a few are solid additions to an already accetably-functional gaming keyboard. Keeping it at $60 bucks with the added features is also great. The membrane keyboard and squishiness that comes with that, plus the slight wiggle of the keys may be deterrent to those looking for a tighter, snappier keystroke. That said, it would be difficult to recommend an RGB keyboard that offers as much as the Cynosa V2 does at the price.

This review is based on a sample unit provided by the manufacturer. The Razer Cynosa V2 is available now in the United States for $59.99 on the Razer website and qualified Razer retailers.