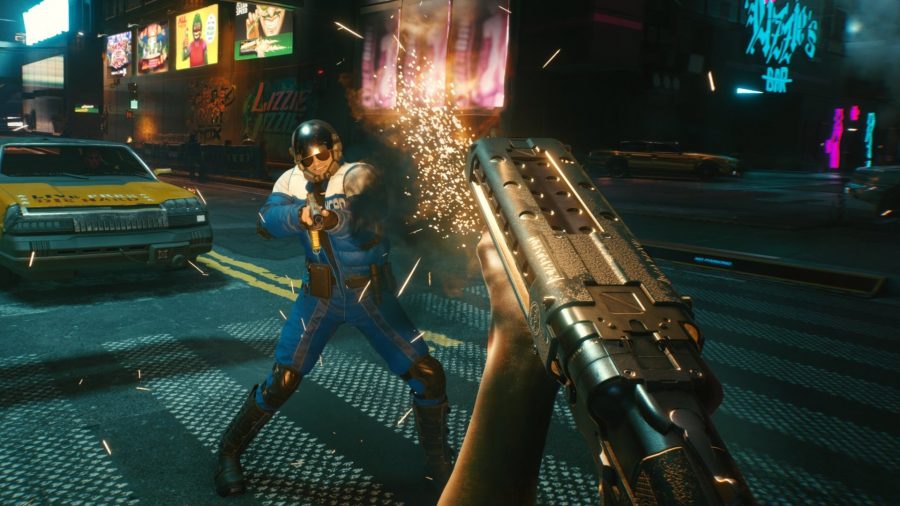 There won't be any shortage of weapons with which you can cause trouble in Cyberpunk 2077. During today's Night City Wire, CD Projekt RED lined out what kind of arms you can expect to equip when you hit the town.

The latest episode of Night City Wire showed off new Cyberware as well as the Tech, Power, Smart, and Melee weapons that will be up for grabs in Cyberpunk 2077. Power Weapons are the closest to regular weapons you'll be able to use, with physical bullets that can rip and tear through enemies and ricochet off of walls and targets. They function essentially as you'd expect.

Tech Weapons, like the Tsunami Nekomata, are guided by electromagnetic power and can pierce walls and cover, so they can get to the "heart" of the matter (or that enemy you're trying to fell.) Similarly, Smart Weapons like the TKI-20 Shingen can help you track enemies by way of guided missile tech, so you don't have to be a great shot to hit your mark – as long as you're in the neighborhood, you should be good to go. You have melee weapons as well, such as the Thermal Katana, which looks like it can do some serious damage to whoever it comes in contact with.

Cyberware, however, refers to the cybernetic tech seen in the game that's grafted to human bodies. It's all artificial and can be used to enhance your character in various ways. The new Night City Wire episode showed off some cool ways Cyberware can be used to assassinate your enemies in addition to using the various weapons found throughout the world.

You'll be able to pick up a variety of weapons throughout Night City as you explore, though of course defeating enemies will net you plenty of loot as well, in the form of weapons from common to legendary rarities. You'll also be privy to attachments, which you can use to kit out your weapons to your liking.

We're interested to see how these weapons fare against the various baddies of Night City, but unfortunately we've still got quite a bit of time to wait until we can give the game a try. It's set for debut on Xbox One, PlayStation 4, and PC on November 19, 2020. Stay tuned to Shacknews for additional updates.