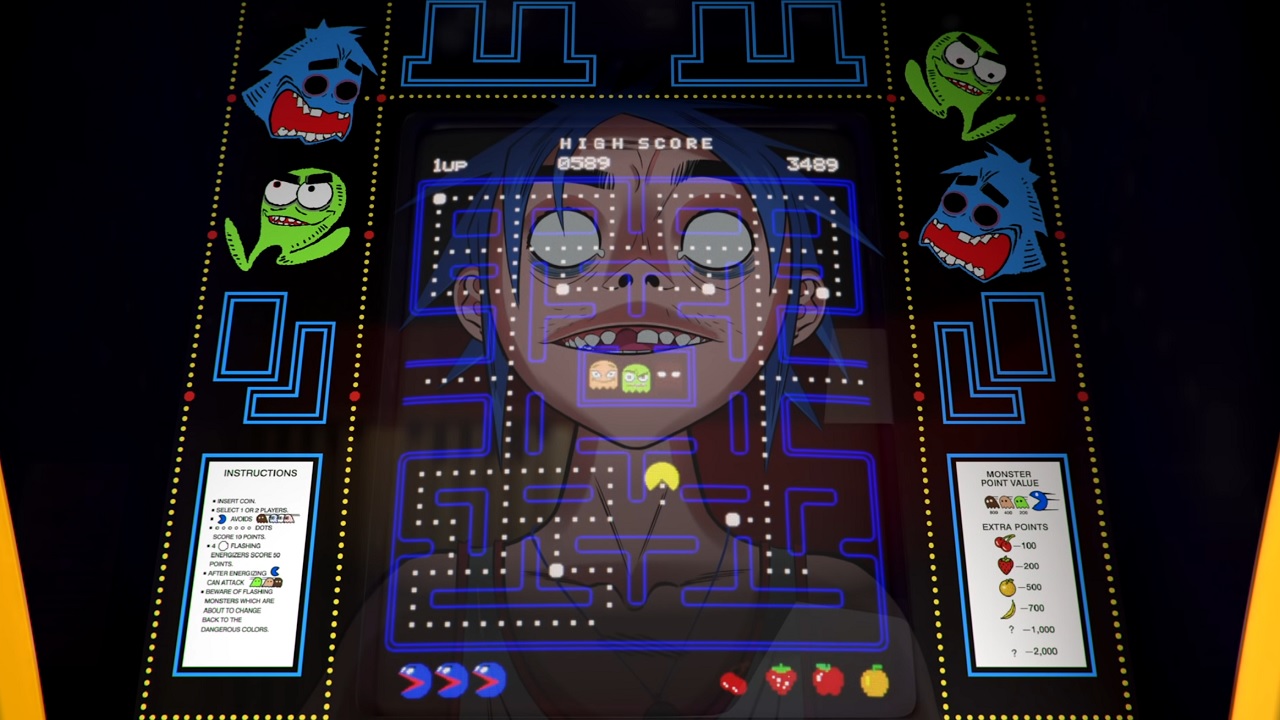 Whenever a Gorillaz music video comes out, we’re usually all in for a good time. The musical group has always made enjoyable jams that mixed animation with reality as the group amplifies their music through animated counterparts 2D, Murdoc Niccals, Noodle, and Russel Hobbs. It’s once again the case as the group partnered with rapper Quincy “ScHoolboy Q” Hanley on a newly released single from its Song Machine project, PAC-MAN, with the legendary classic arcade heavily featured in this new video.

Gorillaz launched the PAC-MAN single on the Gorillaz YouTube Channel on July 20, 2020. The track features everything one might expect of a Gorillaz music video, with antics from the animated members of the band putting on a rhythmic and trippy visual affair to go alongside the catchy tune. In particular, it features 2D playing a Gorillaz stylized version of the PAC-MAN arcade game in which 2D is featured as PAC-MAN and Murdoc, Noodle, and Russel are the ghosts. It also features a hypnotic beat and visual effects in addition to solo verses from ScHoolboy Q. You can see the whole music video in action just below. Warning, NSFW.

The PAC-MAN single marks one of the ongoing volleys of the Gorillaz’ newest musical project, Song Machine, in which the virtual act continues to team up with a wide variety of collaborators like ScHoolboyQ.

“Song Machine will see Gorillaz joined by an exciting and ever-evolving roster of as yet unannounced collaborators captured live in Kong Studios alongside the world’s most successful virtual band,” the statement from Gorillaz reads. The cameras are rolling 24/7, the fourth wall is broken, the kettle is on, the chaos is real, the door is open… What’s coming next? Stay tuned.”

PAC-MAN recently celebrated its 40th anniversary alongside a wealth of goods featuring the pellet-gobbling puck, including a new Micro Player from My Arcade, the Pac-Man Live Studio coming to Twitch, and even an inclusion in Minecraft. The classic game continues to be a major part of the pop culture world inside and outside of gaming and its latest use in Gorillaz is another great homage to one of gaming’s most celebrated icons. You can listen to or download the PAC-MAN single from a variety of sources including Apple Music, Spotify, and more.