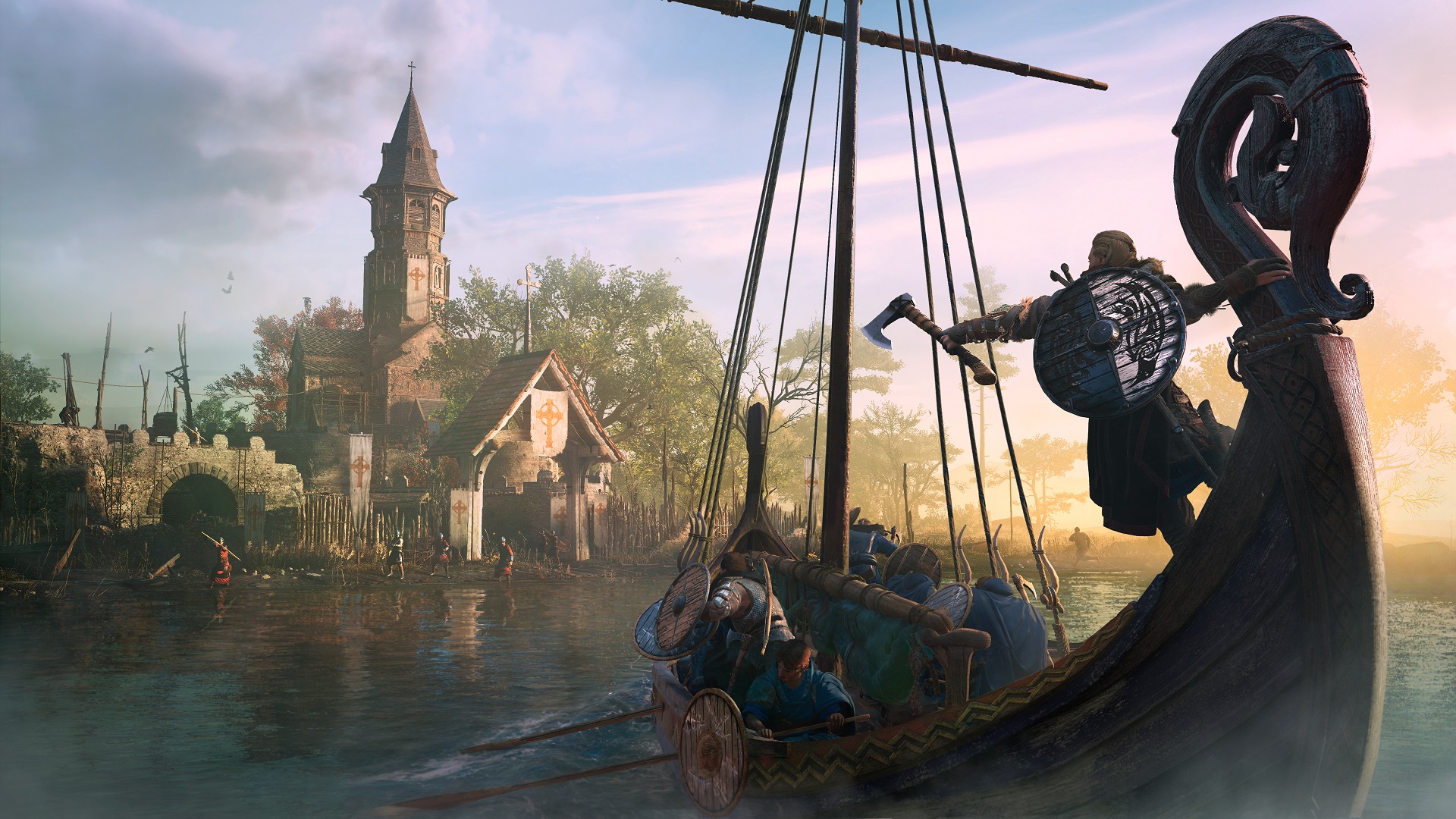 When one things of the Assassins, one thinks of the fleet of foot, the swift, the nimble, and the agile. It's not often one thinks of a big, burly warrior. But how else does one describe the Norse Vikings other than just giant mountains of men? The two come together in Assassin's Creed Valhalla, the next entry in the long-running series from Ubisoft.

There hasn't been a lot of gameplay shown in this next chapter to this point. Fortunately, Shacknews had the opportunity to try out a chunk of the early game, where we got a sense of what it's like to fight as a Viking warrior.

Players take the role of Eivor and, like in Asssassin's Creed Odyssey, this character can either be male or female. The demo started with Eivor on horseback in a setting similar to Assassin's Creed games of the past. But if there's a difference here, it's that Valhalla's world is a massive one, bigger than anything before it outside of the gigantic world of Odyssey. The opening minutes see Eivor meeting members of his supporting cast, like his Viking brethren Finnr and Broder.

It doesn't take long for Valhalla to run with the game's setting of 9th century England. It's not long before players begin navigating their Viking longship, which can be summoned whenever Eivor is at a dock. Navigating the longship can take some getting used to, but they're often the fastest way to get to Eivor's destination, getting me to points of interest even quicker than horseback. Longships can also serve as a way to rendezvous with your Viking brothers, who will aid you in raids. One of the demo's opening missions was to take back a Viking camp by docking the longship and having the whole crew rush the target area.

It should be noted here that not everybody is as skilled a fighter as Eivor. In fact, in my time with the game, the AI proved to be mostly ineffectual. So don't rely on your Viking brothers to help you out. Your own brawn will have to carry you through the day. Eivor's offense relies on quick strikes, heavy hits with his shield, and ranged hits with his bow. The shield is essential for playing defense against enemies. Most enemies will telegraph their hits, but there are advanced enemy types like the Berserker who will pursue Eivor relentlessly and strike aggressively. Not playing defensively is a path to death, as I found out repeatedly.

Mastering Eivor's special moves is a major key to combat. Eivor will get up to eight different special moves that he can unleash over the course of battle, each utilizing different elements of Eivor's arsenal. For example, Eivor can knock down enemies with a massive boot to set up a debilitating stomp or Eivor can infuse his blades with poison and do damage over time. There are many other special moves available, along with a lot of ways to diversify Eivor's build. Valhalla's skill tree is massive, branching off in three different directions, each of which has numerous skill options. On top of that, there's a big chunk of the skill tree along each path that was fogged off, implying dozens of potential abilities for Eivor to pick up.

The Viking raids are some of the coolest elements of Valhalla so far. One mission saw multiple longships attempt to rush an enemy stronghold in East Anglia, where the mission was to save King Oswald from captivity. As the longships approached, players would be prompted to raise their shields to protect themselves from raining flaming arrows. After reaching shore, that's when the mission kicked off in earnest.

Raids will move in phases. In addition to taking on multiple enemies, players will also have to monitor a battering ram, which is being used to bash through barriers. The AI will occasionally make progress, but they often prove to be ineffective. They won't protect themselves against raining arrows and will often barrel straight into fire. You'll have to help move the battering ram along while also looking out for enemies trying to rush you.

The raid will end with a big boss battle against a villain named Rued, who will be aided by his pet wolf. Boss battles will require precision timing and also a lot of sticking and moving. Rued will eventually engulf his blade with fire, which is where things get really tough. Fire causes a lot of damage and often cuts through Eivor and his allies like butter and there's really nothing to do other than avoid it.

There's a later portion of the demo that goes more into the Viking lifestyle, taking players into a Viking wedding. This is where players can familiarize themselves with some of Valhalla's mini-games, such as the timing-based Drinking Contest and the archery challenge that has Eivor shooting at pots. (Piece of advice: Don't do the Drinking Contest first.) Eivor also gets to know more of his colleagues in a more jovial setting, picking up a drunken Finnr from a rooftop and dining with his fellow warrior Broder, the latter of whom offered an interesting sexual proposition. A defeated Rued returned for a much easier rematch, ending this portion of the demo in an action-packed way.

Valhalla looks like it's capturing the 9th century Norse Viking atmosphere with its implementation of longship mechanics, Viking raids, and even Viking parties. There are a few elements of the game where I'm taking some pause. For one thing, the big raid was fun right up until I died against Rued, at which point I had to start all over again. Checkpoints have been a big issue in the Assassin's Creed series as a whole, so I'm not encouraged that it looks to be an undesired element again here, even if the Ubisoft rep noted that there should be a checkpoint placed at the start of the Rued fight. That doesn't exactly help with the 10-15 minutes that precede the boss fight. Another issue, as noted previously, is the friendly AI, which feels almost useless in providing any sort of help.

The other big takeaway from this demo is that while I got a good grasp of the "Valhalla" portion of the game, I didn't get a big sense of the "Assassin's Creed" element. Outside of picking up Finnr's drunken behind off the church rooftop or scaling a building to blow a victory horn, there weren't too many opportunities for me to see the series' signature parkour in action. Those opportunities will likely come, given that there's ample time before Valhalla releases.

Assassin's Creed Valhalla is still sharpening its sword, but the time of war is drawing near. During Sunday's Ubisoft Forward event, It officially received a November 17 release date. When it releases, it'll be available on PC, PlayStation 4, Xbox One, and Google Stadia. Look for it to also come to PlayStation 5 and Xbox Series X whenever those consoles release.