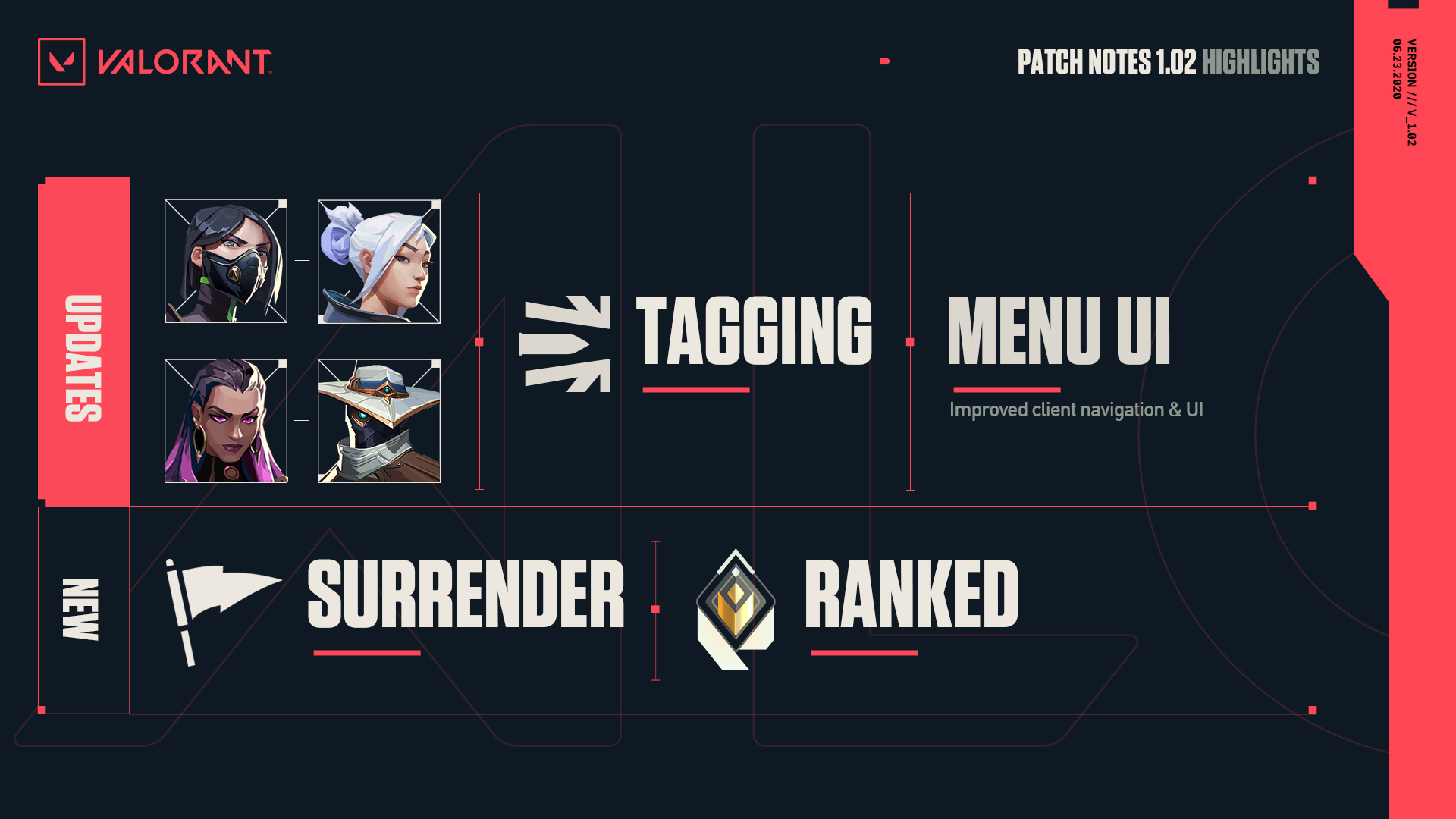 The more time that passes since Valorant released, the more Riot Games learns in order to better the game’s condition. After making the jump from closed-beta to full release, there was plenty for Riot to iron out and balance in their FPS. The developer has launched Valorant update 1.02. With the new patch comes a slew of updates to agents, maps, game modes, and weapons, as well as the highly-requested ranked mode.

Riot Games posted that Valorant patch 1.02 was out on the game’s official Twitter account. A more extensive list of patch notes can be found on Valorant’s website. One of the biggest highlights of update 1.02 is the introduction of competitive mode. Pitting players against each other in pursuit of climbing the ranks, competitive mode has been without a doubt the most requested feature from fans following the game’s launch. In Valorant’s full release, the top rank of “Valorant” has been renamed to “Radiant.”

Patch Notes 1.02 are here with a fresh Menu UI, surrender option, and balance for Viper, Jett, and Reyna. Competitive won't be on with the patch ship and will be coming later. Read all about it: https://t.co/VZxSAktY7t pic.twitter.com/TD7Kd0bm8t

Viper, Jett, Reyna, and Cypher all see changes in the Valorant update 1.02 patch notes. The changes to both Reyna and Jett have to do with their interactions with enemy Phoenixes. A Phoenix using his Run it Back ultimate ability will now drop soul orbs when killed by Reyna. As for Jett, she will now refresh her Blade Storm ultimate ability when killing a phoenix using Run it Back. Viper sees buffs to her toxic screen and Snake Bite abilities, as well as a nerf to her poison orb. The changes to Cypher are bug fixes centered around his different abilities.

Nothing is more frustrated than sitting in a long game of Valorant just getting pulverized round after round. With consequences to quitting early, feeling locked into an all-around poor game is an easy way to turn players off. Valorant update 1.02 adds a “surrender” feature. This allows a team to bow out early if it’s clear that they have no sign of contending in a game. Every member of a team must vote to surrender in order for it to pass.

This only scraps the surface of what is an extensive list of patch notes. Valorant update 1.02 includes a number of changes that will surely alter the meta in Valorant. As the game evolves, players will constantly need to adapt in order to keep an edge over opponents. Bookmark our Valorant guide hub for some helpful tips on your way to Radiant.