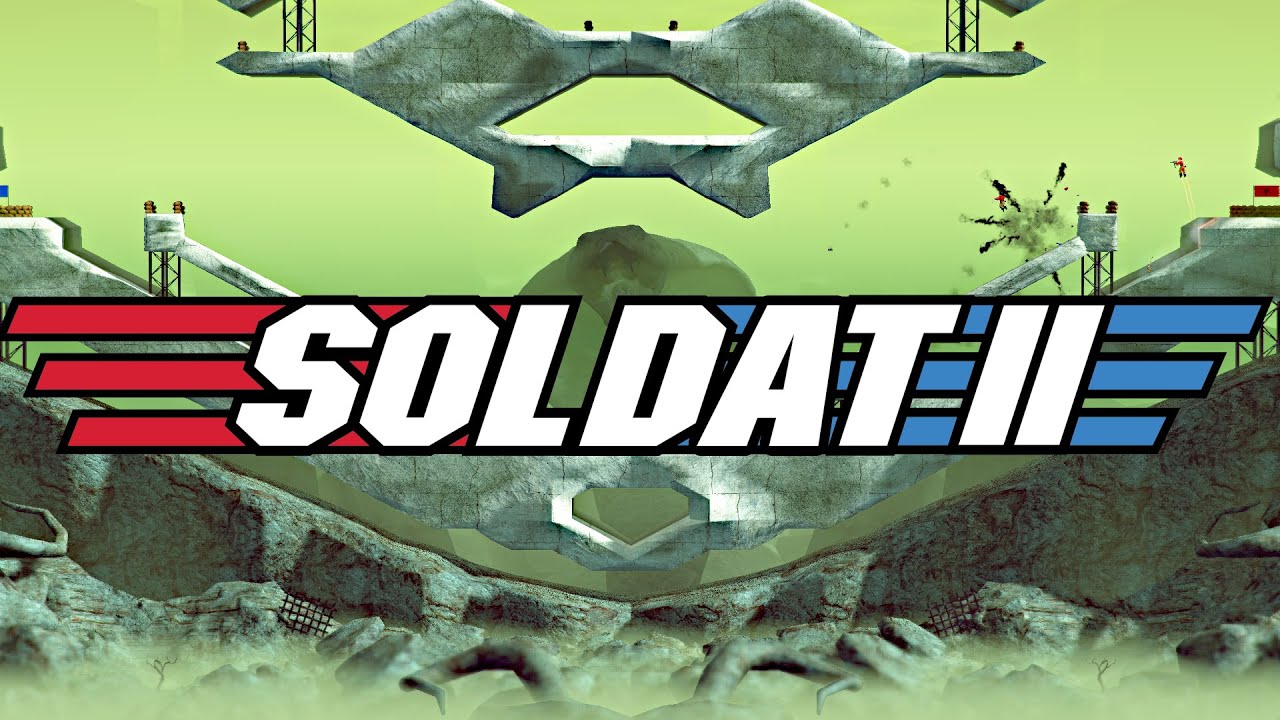 The original Soldat is a wacky fracas of randomized terrain design, chaotic gunfights, and ragdoll gibs, and developer Transhuman Design is aiming to up the splendid chaos in Soldat 2. A demo of the sequel was available to play in the Steam Game Festival 2020 Summer Edition line-up, so I jumped in to see how things are shaping up for the next chapter of ragdoll warfare.

Soldat 2 follows the same premise as the first game, featuring a run n’ gun side-view experience in which players step into the boots of a random soldier and try not to get blown out of them with the game’s wealth of armaments. The demo featured a couple modes, but only in single-player with bots for now: Capture the Flag, in which teams of four battle to take each other’s flag back to home base while protecting their own, and One Man Army, in which players battle against an increasing number of foes to move forward in a map. Capture the Flag had static map design, but One Man Army’s terrain was randomized in a way that reminded me of the Worms series, but with fast-paced shooting and gibbing.

Soldat 2 features a 2.5D upgrade over the first game’s visuals, which includes upping intense velocity of character movement and also the fun of the ragdoll physics when you send a foe flying with kill shots or blow them into bits with a grenade or other explosive. The increased emphasis on movement physics means that bunnyhopping is also a viable strategy in some elevations to get your character really moving. I had fun turning my character into a full-speed bulldozer as I went charging into enemies with an M79 grenade launcher, for better or worse outcomes.

There was little to see in Soldat 2's single-player demo other than how the gameplay is shaping up, but it looked promising once I got into it. In the demo menus, the basis for custom games, level design, and multiplayer were already there, though currently inaccessible, and Transhuman has also further promised that modding and ease of content creation will be a big emphasis of their upcoming game. A roadmap for creation showed that multiplayer access is coming in Q3 of 2020, which is absolutely where Soldat 2 feels like it will shine.

With Early Access opening at the same time as the multiplayer features later this year, Soldat 2 is feeling like it’s got the groundwork of silly physics-based run n’ gun warfare downpat. Having gotten a good look at how it feels blowing bots to bits with a flak gun or sending their body spinning through the air with a hail of MP5 lead, I can’t wait to see how it goes when we can start doing the same with (and to) other players. The foundation is set. Here’s hoping Soldat 2 can deliver all of the goods and more on top of the first beloved game. Be sure to check out Soldat 2 and Wishlist it on Steam to keep up on the latest content coming to the game.