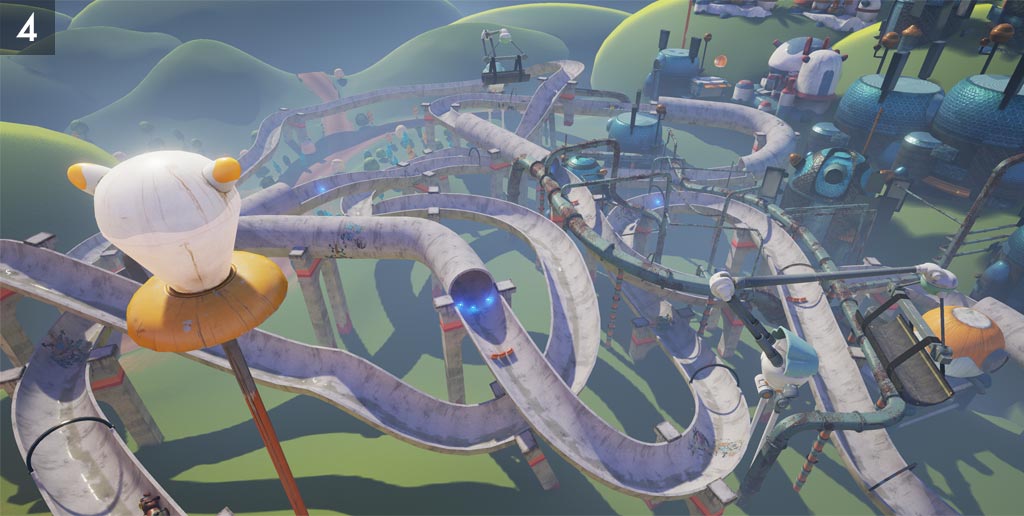 In the absence of E3 and so many other in-person events around the gaming industry, we’ve seen several digital events step up in their place. Steam, Valve’s PC storefront held the Steam Game Festival 2020: Summer Edition event in order to spotlight new games from a variety of developers. One of these titles was Bot Rods, an arcade racer from Hobo Interactive, The Cirqus and Holy Cow Productions. This kart racer ditches traditional vehicles, putting players in control of super fast robots.

Bot Rods follows the standard formula of the kart racer genre, putting a very childlike theme around it. The characters are cute, looking like they were plucked directly from a show that would air on Nickelodeon on saturday mornings. Before a race, you can choose from a number of characters, and then customize their gear and clothing. Of course, these customizations have no impact on stats or the racing itself. I thought this feature was pretty neat, though the demo only lets you choose from a very limited amount of options.

During a race, players can opt to play with a keyboard and mouse, or a controller. I used an Xbox One controller for my time with the game, as it felt most natural for a racer. The controls feel solid, though it’s odd playing a racer where there aren’t any cars or motorized vehicles. It was pretty easy to maneuver around obstacles, as well as use power ups and check the surrounding area.

Most arcade racers provide an over-the-top level of chaos thanks to power ups and other variables in a race. Because of this, many races aren’t won because of pure skill, but because of outside factors. This is the defining trait that separates racing sims from arcade racers. Oddly enough, Bot Rods feels awkwardly stuck in the middle.

When you fall behind in a race, it seems like there are very few ways to catch up unless the racer ahead makes a mistake. There are a handful of power ups that can be used to gain some ground, but that’s about it. Many racers allow players to catch up to those ahead via a slipstream or “catch up” feature. There were several points where the CPU got ahead in a race, and I just simply wasn’t able to come back because there was little opportunity to do so.

Power ups are a staple of any arcade racer. Allowing players to turn the tides of a race in an instant, power ups grant special abilities. Bot Rods features a number of the power ups that you would expect, such as speed boosts and rockets. However, there was one in particular that I thought was really fun and inventive. Upon activating, the powerup would swap the player with the racer placed ahead of them. Not only does this feel like a creative addition to the power up pool, but also requires the player to be a bit strategic, as it’s not always going to put you in the most favorable position. I also like how Bot Rods gives a meter showing players how close an incoming projectile is.

Bot Rods is a brand new entry in the world of arcade racers. Built on the groundwork of some fresh conceptual ideas, there just isn’t much building done on top of it. Despite a couple of cool power ups and customization options, Bot Rods just doesn’t contribute enough to feel like a worthy addition to the genre. The developers could work on this by going all in on their concepts of robotic racers and leaning further into their characters. As it stands, Bot Rods still has a long road ahead before it can finish the race.