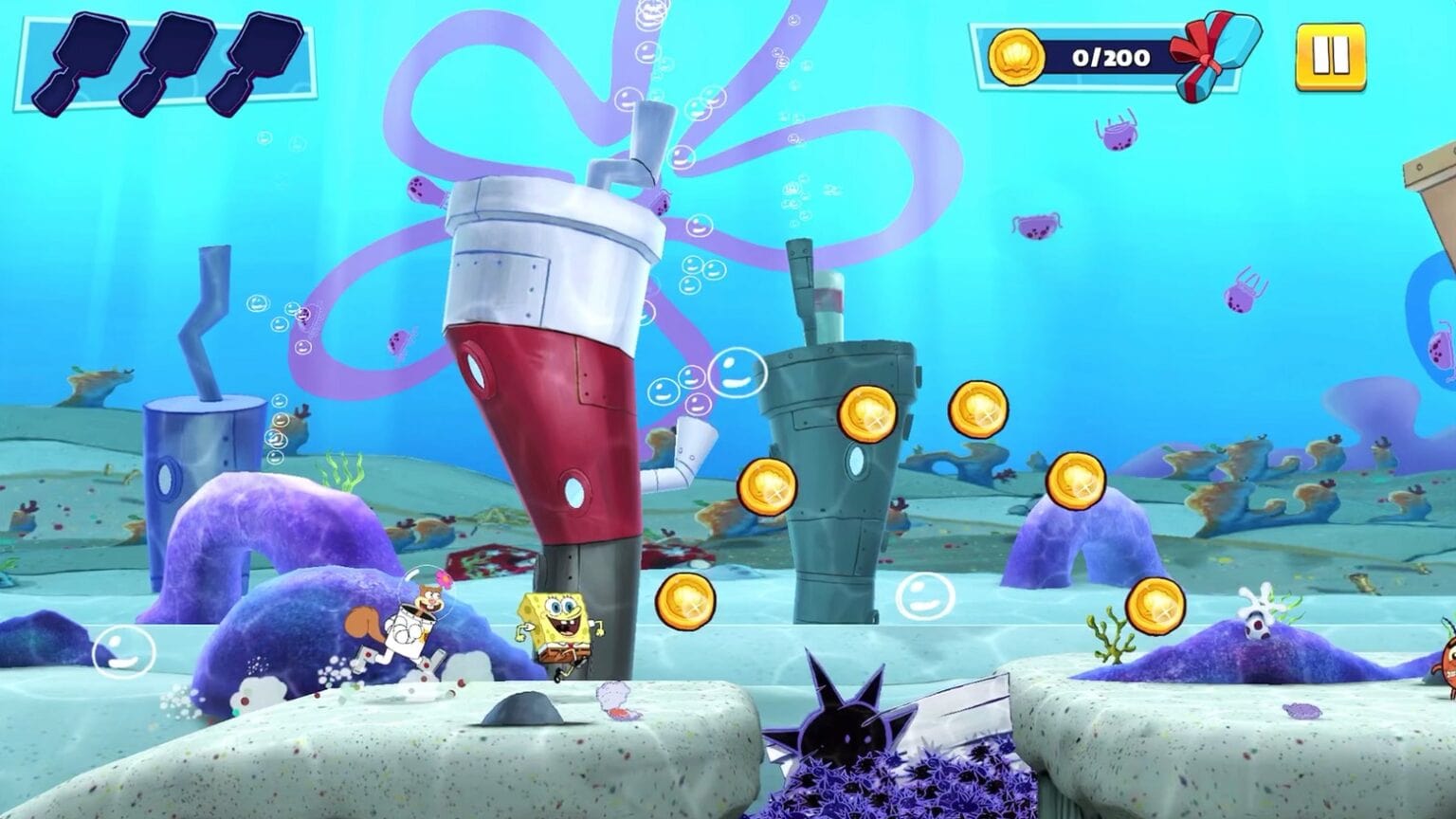 Are you ready, kids? I can't hear you! You should speak up louder, we're underwater right now. Who lives in a pineapple under the sea and is starring in an awesome new mobile game? SpongeBob, of course!

Our favorite fry cook is back with a brand new game that you can play on the go on your favorite iOS device thanks to Apple Arcade. SpongeBob: Patty Pursuit finds SpongeBob running his little heart out as he vaults over obstacles, collects coins, and stays hot on the trail of that ne'er-do-well Plankton, who's trying to nab that Krabby Patty recipe once again.

We had a chat with Nickelodeon Games VP Adrian Wright about everything that goes into making great SpongeBob games as well as the franchise as a whole. If nautical nonsense be somethin' you wish, read on!

Shacknews: The game works quite well with swipe controls and I was pleasantly surprised to see it wasn't just an endless runner. How did you arrive at the decision to give players more freedom to move SpongeBob?

Adrian Wright, VP, Games, Nickelodeon: Our goal was to deliver a great platformer that worked well across platforms. Having SpongeBob auto-run was good for the mobile platform, especially because it gives the player more control and allowed us to incorporate more puzzle platforming. We worked hard to ensure that the game felt like a well-designed platformer and feel it’s more in line with the legacy of SpongeBob platformers and offered the right kind of challenge for our audience. A SpongeBob platforming game in this style has been gestating for a long time. We wanted a game where SpongeBob needs to work with his friends to traverse through the levels.

Shacknews: Was the new game created in response to the surge of popularity around SpongeBob in terms of memes and whatnot?

Wright: Over the last 20 years, SpongeBob has always been a top performing property for Nickelodeon. This game gave us the opportunity to provide a great gameplay experience for fans of all ages. Players will enjoy the familiar retro gameplay elements of this side-scroller and also respond to the unique uses of SpongeBob in this context. SpongeBob has a wide range of fans because of its longevity and over 20 year history. The familiar gameplay is also appealing to all fans of platformers.

Shacknews: What are some of your personal SpongeBob series moments?

Wright: In this game, we expanded upon one of our favorite episodes from SpongeBob SquarePants, “Plankton’s Army.” In that episode, Plankton calls upon his cousins to join him in his quest to get the Krabby Patty formula. Later, once you think that Plankton has finally gotten his hands on the formula, he reads that the most important ingredient is four heaping pounds of freshly ground…plankton. This sends Plankton and his cousins screaming back to the Chum Bucket. This was of course a trick devised by Mr. Krabs to scare Plankton off. We still don’t know what makes Krabby Patties so delicious.

We think Plankton’s cousins are a lot of fun and enjoyed by our audience, so we decided to bring them back for Patty Pursuit. This general premise serves as a quick jump-off point for an authentic SpongeBob adventure. Without much exposition, the user quickly understands the stakes. From there we add interesting events, locations and characters along the way to create a unique comedic adventure. SpongeBob cannot rest until it is safe.

Shacknews: What went into the decision of making the game an Apple Arcade exclusive?

Wright: Apple Arcade is the perfect home for this type of game. It allowed us to focus on pure game mechanics and story.

Shacknews: Will the game have seasonal updates and additional content drops in the future?

Wright: We are already working on the first couple of updates for the game, and plan on continuing to develop new content.

Shacknews: Did all of the actors from the show return for the game?

Wright: Yes, the characters in the game are voiced by the same actors who portray them most recently in the show. This includes the core cast such as Tom Kenny as SpongeBob, Bill Fagerbakke as Patrick and Carolyn Lawrence as Sandy. The same is true for other characters, like The Flying Dutchman played by Brian Doyle-Murray and Karen played by Jill Talley. A big priority was to maintain the authenticity of SpongeBob as much as possible.

Shacknews: What is the most important thing to you about making a SpongeBob game?

Wright: Authenticity! Anytime we work on a game for SpongeBob it needs to feel authentic to the fans.

Shacknews: How did you narrow down which moments from the series you wanted to reference in-game?

Wright: Everyone who worked on this game has a long history with the property. Many of our developers grew up with it. You will see various references to popular and iconic episodes throughout the game. We reference moments from the show with level environment art, voice over clips, characters, level names and more. We have certain moments that have bubbled up and become popular and iconic over the years, which we tried to incorporate. There is so much applicable comedy from the television series to leverage, making it easy for anyone involved in the project to incorporate something they love.

Shacknews: What was it like working with such a beloved property?

Wright: Even after years of working on games for this property, it still feels fresh every time. There is so much that we can do in SpongeBob’s world. It feels good to work on games for a property where humor and heart are at the core. Whether we are working on the game or playing it, SpongeBob always makes us feel like a kids. Additionally, working with an outstanding show team really make it a special experience, as well.

If that all sounds like a whale of a good time to you, drop on the deck and flop like a fish! Er, you could just download the game for iOS and start chasing after Plankton yourself.