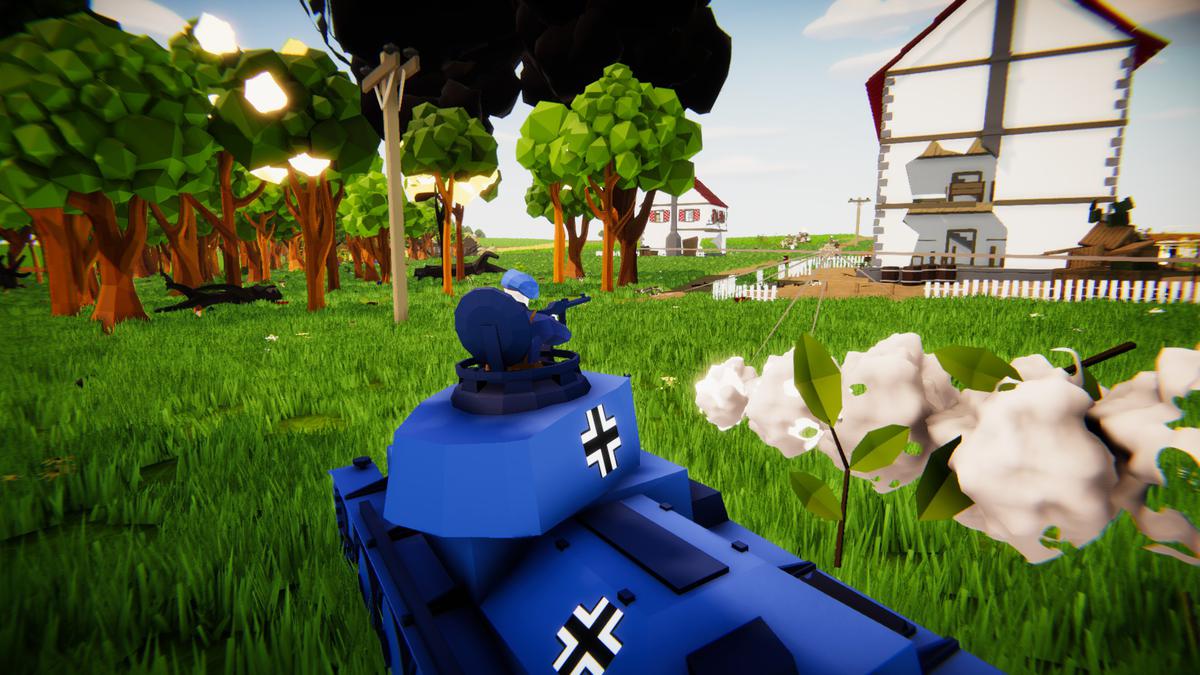 Total Tank Simulator is a passion project from the team at Noobz from Poland. Published by 505 Games, this battle simulator takes the genre and looks to triple down on it. Players can explore over 50 battle maps throughout a fleshed out campaign, sandbox mode, and shadow mode.

When playing an early build of Total Tank Simulator on PC using mouse and keyboard, I got to experience Noobz from Poland’s take on the battle sim genre. Something immediately apparent when launching Total Tank Simulator is the game’s World War II theme. From the army units controlled, to the large range of tanks and airplanes usable, it’s mostly based on the actual happenings in World War II.

It’s this choice to pursue historical accuracy that really adds to the experience. There are six playable nations in Total Tank Simulator, based on the bodies that played central roles in World War II. Germany, USA, France, UK, USSR, and Poland each feature their own unique troop designs and vehicles. This variety really comes into play in sandbox mode. Where the player can mix and mash scenarios and pit the different nations against each other.

The real charm of Total Tank Simulator hits when the battles commence. Before beginning the battle, players get to buy and select resources using a limited amount of money. This includes vehicles and weapons, along with human soldiers. They then place them strategically around the map where they feel they will be most effective for the objective. Once the player starts the battle, everything on the battlefield springs into action.

As the explosions go off and rounds are fired, players are witness to the chaos from above. You can freely zoom in and out and pan around the map to see all of the action. The maps in Total Tank Sim are huge. Individual battles were taking place so far apart from one another that I found myself frantically jumping around the battlefield to catch it all.

Total Tank Simulator allows the player to jump in and out of units to manually control them at any given moment. This is where I had the most fun playing Total Tank Sim. I’d be observing from the clouds as battles raged against USSR and German soldiers, rooting my team on. The next moment, I was boots-on-the-ground running through the forest alongside a dozen other soldiers. We approached a building where a number of enemy soldiers were hiding out and opened fire on them. A loud blast boomed over us, as an ally tank struck the building, causing it to crash down over the enemy soldiers.

This was just one moment in the middle of a battle where there were several different combat engagements happening simultaneously. Other times, I soared over the battlefield in an attack plane, jumping in and out of dogfights. In some cases, I led a squad as a tank, dealing big damage to enemy units. This may not be the most effective way to to strategize and win a match, but it was certainly the most fun.

Total Tank Simulator is an ambitious spin on the growing genre of battle sims. With its physics-based chaos and attention to historic detail, there is a ton of fun to be had and experimenting to be done. For those looking forward to getting their hands on the game, it’s been announced that Total Tank Simulator will receive an official release on May 20 for PC.