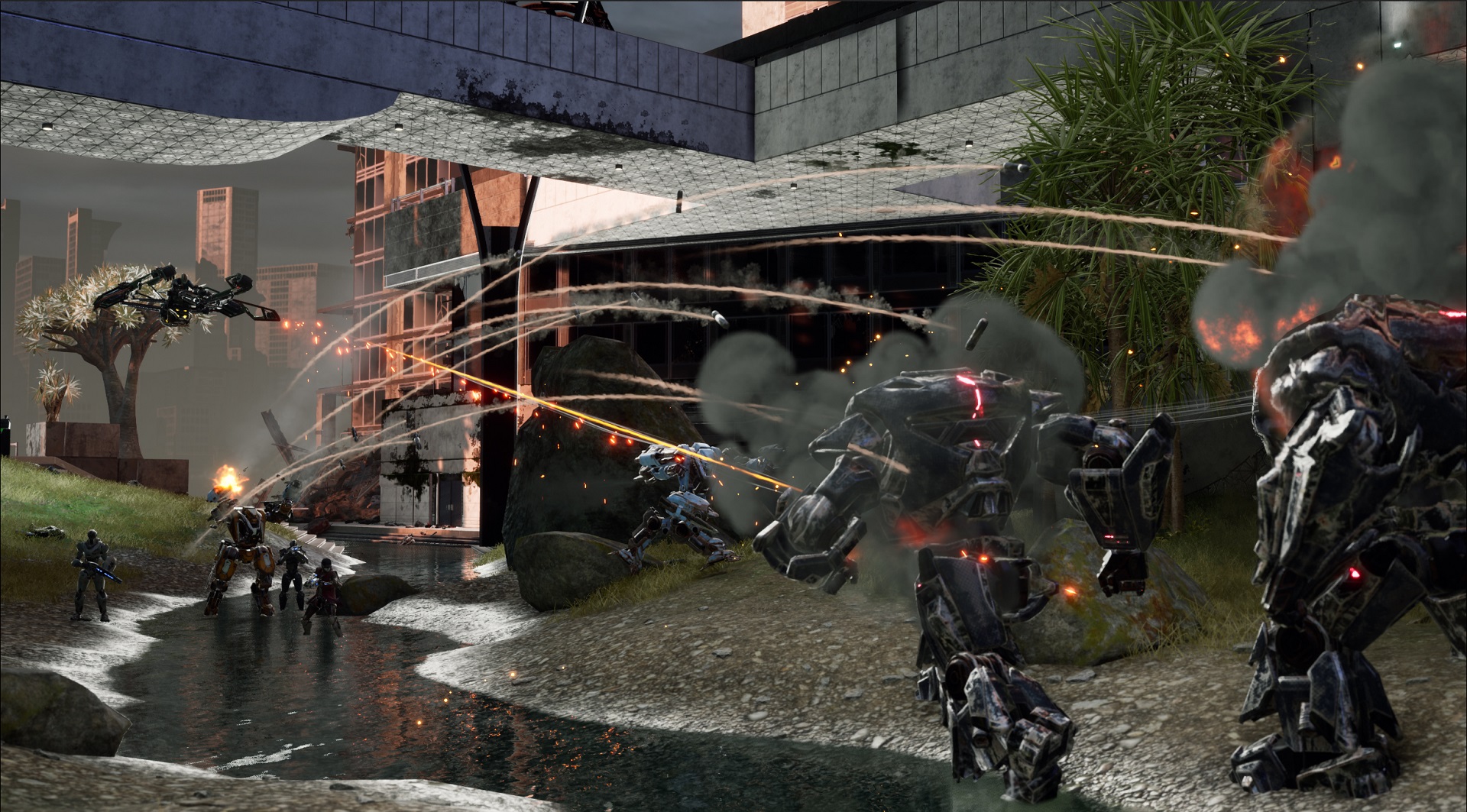 Earlier this week, Shacknews got a chance to take an early look at Disintegration's single-player campaign. It was a peek into what drives this dystopian future, as players learned more about the dire state of humanity that has forced them to be integrated into robotic shells. More than that, it was a look into how humanity found itself in the clutches of civil war.

War in Disintegration is different than one would expect, in more ways than one. Humans are battling within their robot shells, but for Disintegration itself, warfare unfolds through Halo-style shooting and XCOM-style strategy. It's an intriguing hybrid of styles, one Shacknews was interested to learn more about. So we spoke to V1 Interactive President and Disintegration Game Director Marcus Lehto to inquire about Disintegration's world, the origins of Black Shuck, Outlaw difficulty, and more.

Shacknews: What can you tell me about Disintegration's single-player story? What does it mean to be integrated?

Marcus Lehto, V1 Interactive President/Disintegration Game Director: The story all takes place in a possible future from now, where humanity has been dealt some very difficult and integrating with robotic armatures is one means of survival.

In this future where integration is a viable path forward for survival, what it means to be integrated is that the human brain is literally taken out of the body and encased in an armored shell and integrated into a robotic armature. It's one means of that person surviving throughout the period of time, allowing them to get through this period where a solution can be found. The goal is ultimately to become re-integrated with a cloned version of their body where they can then go on and continue to live as a normal human.

That was the initial premise. That's where it started, it was very hopeful. It was also a thing that was kind of like a celebrity status when it first began, because it was only the rich and famous who could afford to be integrated and things went well for a few years. Then as integration became more common, it then became mandated. Those who had been integrated actually liked who they were now as a robot, as a character who's stronger and capable of withstanding more intense action and is much more durable, I should say. Also, it doesn't just have to be a humanoid form. They could take on different forms. They could take on different personalities. They can be a different person in this robotic form.

A lot of those who had been integrated decided to split away and began forming a new militarized force called the Rayonne who rose to power and pushed this post-humanistic trajectory where they don't want to become human anymore. That's not a goal of theirs any longer. So those who do want to become human again and those naturals who are still not integrated became a threat to them. A war was waged and that's where our game picks up, after that war has already started. We are introduced to some of our primary characters who have escaped from the Rayonne and are not outlawed and being hunted by them.

Shacknews: What can you tell me about those main characters? How do they come to know each other over the story?

Lehto: So each one of the characters are normal people, like you and me. They're not crazy Navy SEALs or genetically modified in any way. They are not military trained. They are mechanics, workers, press, game developers, whoever. They have been integrated and they still sympathize with the natural humans on the planet.

Shacknews: When you have that robotic armature, it doesn't make you immortal and it doesn't even necessarily make you enhanced. How does that play into the combat?

Lehto: You are not immortal. You are not remotely driving a robot around. That is you, the person, inside that robot armature. You are susceptible to being killed and you have to be aware of that. As you play Romer, the main character of the game, your goal as that grav cycle pilot and commander in the sky is to keep those ground units safe at all times. Use them effectively and tactically, but don't put them in undue harm's way. So it's your job to command them effectively in that way. Their bodies can be destroyed and their brain will fall on the ground. And just like in multiplayer, you have to swoop in with your grav cycle and retrieve that brain where they can be re-integrated with a new robotic body and they will respawn in front of you. But if you don't get there in time, it's assumed yes, that character has been killed and it's a mission failure. You'll reset checkpoint back to where you begun the mission.

Shacknews: One key difference between the single-player and multiplayer is time dilation. How does the ability to slow down time affect the way players approach the game?

Lehto: It's very different in campaign. As you mentioned, in multiplayer there is no time dilation. We do that because of networking and real-time between 5v5 players. In solo player campaign, we have the freedom to give the player a new tactical window to play with. So as they use their unit abilities, as they stage them in the environment, we dilate time, we slow things down, allowing the player to do things tactically that they just physically can't do in multiplayer. You can use abilities and set them up at your own pace and your own time. Meanwhile, you can still be actively moving through the environment as you're staging that ability, allowing you time to consume what's happening on the battlefield and really use that ability effectively as the commander in the sky.

Another neat thing about it is, it gives you opportunities to combine other unit abilities together. You can stage multiple unit abilities back-to-back in a time dilated state, which leads to some really cool tactical maneuvers.

Shacknews: You've mentioned that Disintegration bears more of a resemblance to Myth than Halo. In what ways would you say it resembles either game?

Lehto: It actually started out more like Myth, initially, because it was a traditional RTS game and it was very much your micromanagement of large groups of units all set in the same universe. But it just wasn't all that unique to us. We were excited about the game at that time, but we knew we needed to do something special to it. That's when we decided to turn that camera in the sky into that vehicle that became the grav cycle, which becomes an active participant in combat. While the game still holds some of that to be true, as far as that tactical element, we really did change it dramatically to invent the gameplay mechanics required to make sure that the first-person shooter action element remained the primary focus and that the RTS element on top of that became this supportive element in a way that didn't overwhelm the player. That took a long time, actually, to go back-and-forth and back-and-forth on the core mechanics to get that right.

So how does it resemble either Myth or Halo? I love first-person shooters. I love action. I love that fluid kind of movement through an environment and such, so that's one of the things I really embraced about the new direction we decided to go with when it became what it is now today. But I also love the real-time tactical element of it. That was one of the things that I really enjoyed when I was helping finish up and work on Myth: The Fallen Lords back when I first joined Bungie in the early days. So there's a little bit of both peppered in there, but I would say, in general, I would say it's 70 percent first-person shooter, 30 percent tactical element on top of that.

Shacknews: You talked about Black Shuck being one of the original integrated and how he stands up above everybody else on the Rayonne side. So I have to ask, was the idea to portray him as sort of an anti-Master Chief?

Lehto: I never thought about it that way! But yeah, Black Shuck, his backstory is pretty interesting, because as one of the original integrated, who then made a conscious decision to go in this post-humanistic trajectory, along with the other Rayonne who are in power, he fell from grace within the ranks of the Rayonne because he screwed up. We're not talking about why or what happened there. So he was given a backwater outpost, mopping up the remains of the outlaws and naturals that are left over on the North American continent from the civil war that basically had already been waged and won by the Rayonne.

His goal is to regain favor and one of the ways he thinks he can do that is by using some of the tools in his bucket of relationships that he knows he has. One of those that he has is with Romer. Romer used to work for Shuck, back before the Rayonne really took over, as a repo man, repo-ing grav cycles after his career fell apart. Romer didn't like that. He decided he wanted to start selling some of those grav cycles to the underground market, to naturals who needed them and were building a resistance called the Human Liberation Coalition. It's the HLC that Black Shuck really wants and he knows Romer might be a means at getting at them. So he thinks that if he can connive his way through this, like a Hannibal Lecter type character, he can get to what he wants and he can rise back up to the power that he thinks he deserves within the Rayonne.

Shacknews: Lastly, what can you tell me about Outlaw difficulty?

Lehto: The hardest difficulty in the game? The most ridiculous way to play the game? It's really hard! We do a lot of interesting things with difficulty settings. It's not just amping up enemy health or the number of enemies. We dramatically change the way they behave in the game. In "Story" mode, in contrast, which is the easiest setting, the player can just consume the world of Disintegration and experience the story in a much more relaxed way. The AI is challenging, but they behave very differently in contrast with Outlaw mode.

In Outlaw mode, we change focus where the AI will target you, the player, much more so. So as soon as you engage in combat with them, they will change their whole perspective to focusing on you, which is much more difficult in staying alive in those later missions, especially. Not only does the game get progressively get more difficult from Mission 1 to Mission 12 at the very, but also those AI in-between are all very different, as far as their behavior.

So if you're up for a ridiculously insane challenge, go for it. It's awesome. It's one of the ways I prefer to play the game.