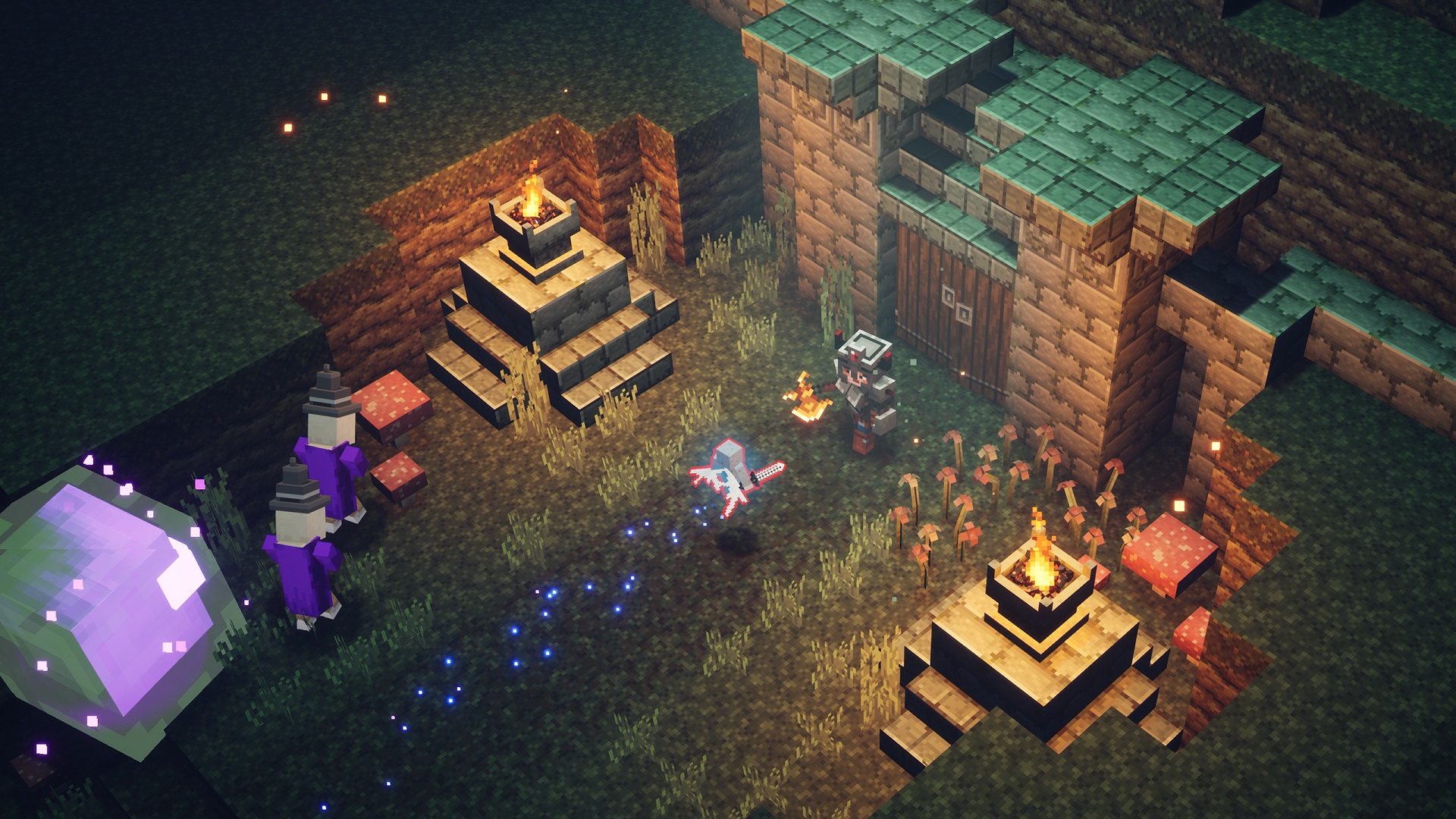 Minecraft Dungeons is among the year's most anticipated games. Mojang is taking the voxel world-building formula that has proven so successful and taking a bit of a sidestep, spinning off into dungeon crawling. Mojang has been hard at work putting this dungeon crawling effort together, but there hasn't been too much to see since the game was last seen at MINECON Live 2019. But with the game's release date inching closer, Mojang took some time to walk members of the press through the early portion of the game, with Shacknews among those invited to take a look.

Mojang showed off some of Minecraft Dungeons' various biomes, all of which will look familiar to seasoned Minecraft veterans. A mission map allows players to select individual missions with a central objective. To start, the Minecraft Dungeons team ventured into the Creeper Woods, where the game's heroes were tasked with freeing the captive villagers. Because all free folk are considered enemies of the wicked Arch-Illager, many villagers are being held captive. The mission involves locating a caravan and stopping the Arch-Illager's forces.

The first thing to note is that the enemy mobs are plentiful. The screen was practically covered with Creeper mobs and the large numbers can be a bit intimidating. Fortunately, players can fight with their vast inventory of weaponry. Minecraft Dungeons is not about grinding levels, because there isn't exactly traditional RPG-style leveling. A character is as strong as his or her gear. Anything you find, you can equip it and use it, with skills, stats, and abilities coming from your gear. Melee weapons, including hammers, scythes, cutlasses, and bows all have their own strengths and abilities.

The same deal goes for armor, with Mojang displaying one example in the form of Spelunker Armor. This not only buffs up a character's defense, but it also includes a pet bat to assist in battle. Weapons and armors can be enhanced thanks to Artifacts, which are found over the course of the game and after finishing each mission. Enhanced gear helps greatly against those massive mob numbers. We watched as one of the characters stepped into battle with an enchanted armor set that zapped enemies with area-of-effect electricity. Enchantments can also be passive. The Love Medallion, for example, can be equipped and can turn some mobs friendly. While leveling up won't up your stats, they will earn more Enchantment points to help strengthen inventory pieces.

As for the maps themselves, they won't always be the same experience. Minecraft Dungeons will offer a mixture of procedurally-generated and fixed layouts. Major item and boss encounter locations are usually fixed, while the paths leading to them are randomized. Hidden houses with stages are also randomized, offering different items and rewards.

While player characters can be enhanced and enchanted, be careful because mobs can likewise be enchanted with different abilities. Players will encounter foes that are familiar to those who have played Minecraft, but will also find some new faces. For example, Wraiths are a new addition and these blue fiends call in additional enemies if not taken down quickly. And going back to the idea of randomization, sometimes players can run into "Event Mobs," which are as strong as mini-bosses and appear randomly during mission runs. They're often tough foes, like Endermen, but defeating them can lead to lucrative rewards. Exercise caution, though, because Event Mobs don't always have the best timing and can sometimes show up in the middle of a clash with dozens of Creepers. Sometimes the Arch-Illager himself will pop up and try to spawn in extra mobs to make life a little bit harder.

After touring the Creeper Woods, we got a look at another familiar Minecraft staple, the Redstone Mines. The mission here was to locate another group of captive villagers, but this looked to be much tougher than the Creeper Woods. For one thing, the level is laid out with more narrow corridors, making encounters a bit more difficult. Environmental hazards are also everywhere, with runaway mine carts filled with explosive redstone blowing up after taking any kind of stray shot.

Certain situations call for certain character builds. Minecraft Dungeons makes it easy to dig through your inventory in order to switch up styles on the fly, in case a scenario calls for either a ranged build or a melee one. Another way to theoretically make runs easier would be with friends. Just be careful, because while Minecraft Dungeons supports drop-in, drop-out multiplayer, the mission difficulty will dynamically adjust itself depending on how many players are present.

One thing to note is that parties only have a certain amount of lives in each mission, but they can preserve their life count by resurrecting allies in time. There's also another major incentive when it comes to saving your friends. If a character goes down, night will fall and additional mobs will spawn. The only way to stop this is to revive the fallen character. So be sure to watch your allies, especially as you face bosses like the Redstone Golem, who can lay down explosive traps and chase after party members relentlessly. While this all sounds difficult, Mojang isn't without mercy. If all party members fall, they'll respawn at a point nearby with their progress saved. That also applies to boss fights, so you won't have to worry about starting a boss battle from scratch.

While this sounds like a lot to take in, Mojang isn't expecting the game to be too big a time investment. The devs noted that anyone who sprints through the full game can finish it in five hours, but those who take the extra time to search for secrets and loot can play significantly longer. Likewise, players can expect DLC with new loot, new mobs, and new things to explore.

Minecraft Dungeons is weeks away from release. It's set to release on May 26 on PC, PlayStation 4, Xbox One, and Nintendo Switch for $20. Those with Xbox Game Pass can grab it on release day on Xbox One.