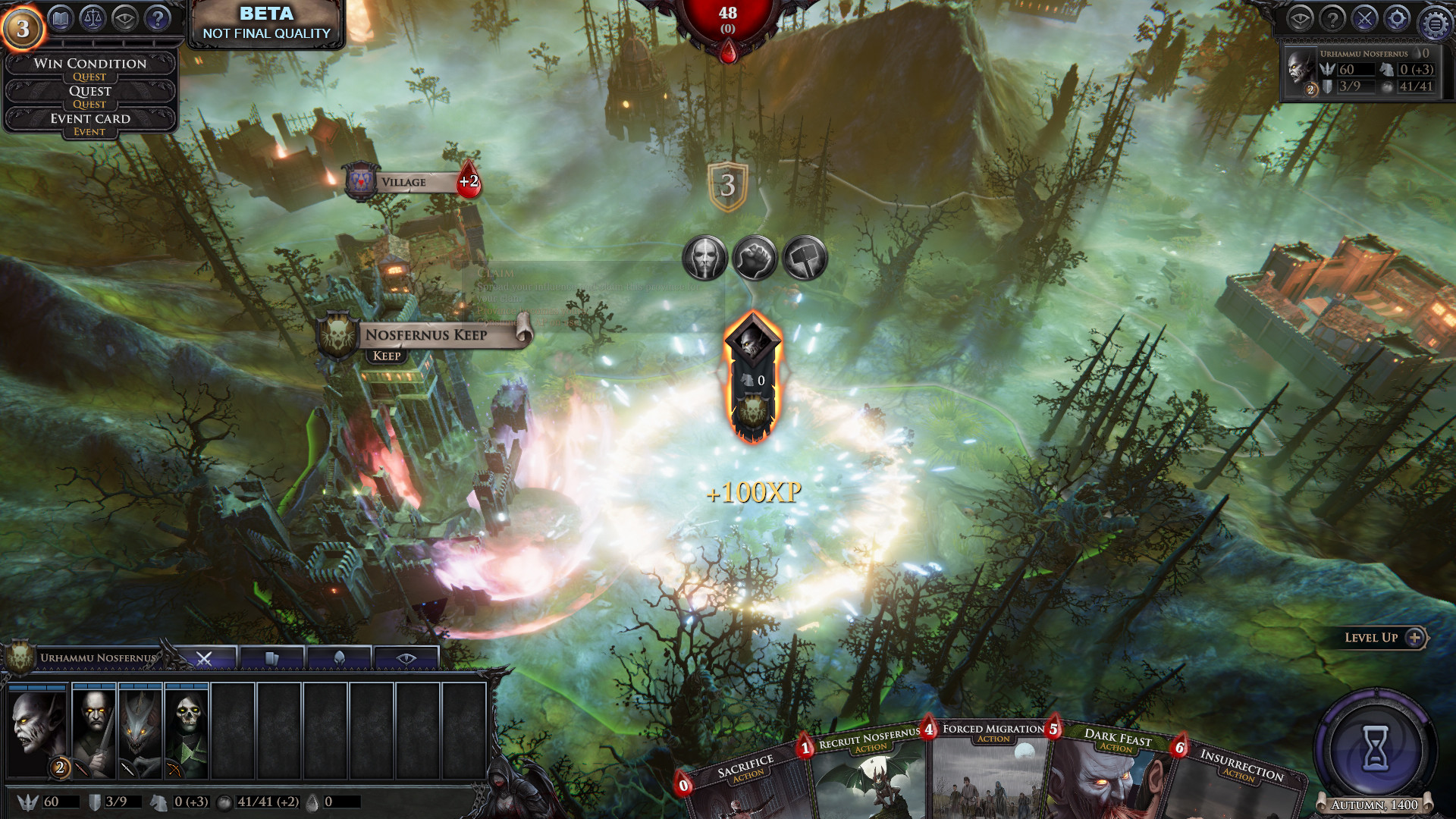 With hefty RPGs like Vampire: The Masquerade - Bloodlines 2 on their way to make waves soon enough, it's a great time for fans of horror's elegant bloodsuckers. I had the opportunity to check out Immortal Realms: Vampire Wars, an intriguing 4X strategy title that combines elements of card battling games with turn-based combat and grand strategy. The result? An engaging mishmash of genres that should delight both newbies and seasoned vets. From where I'm standing, it certainly looks like an exciting new addition to any strategist's gaming war chest, so to speak.

Immortal Realms: Vampire Wars is a single player game set in the world of Nemire. It's split up into 12 different campaign missions, with each group of levels headed by their own unique vampire lords: representatives of the Dracul, Nosfernus, and Moroia. Each faction gets four levels apiece. These missions are meant to be larger than that of your typical 4X game, which explains why there aren't that many to begin with. These are all part of the campaign, though there is a custom mode, sandbox option, and various other ways to play. For the purposes of our virtual demo, I was shown the narrative structure and vampire lords' storylines.

In the Dracul campaign mission I was shown, vampire lord Cecilia is looking to eliminate a group of humans who have just set one of the Dracul's villages aflame. She must get to the bottom of why this heinous action against her kind just occurred. This involved many of the same mechanics you might typically find in a strategy game, except from the beginning of each conflict, everything will revolve around the cards you draw.

While there are different types of units (basic infantry, generals, etc.), you need to bring the right type of cards into battle if you want to succeed. Of course, you'll still have to recruit additional units, upgrade your buildings, train the lords in charge of your units, and battle against the AI units to see who comes out on top. The cards simply make things feel much more interesting.

In Kingdom Mode, which kicks off the battle, you get three different cards before you can take a look at the map before you. Each card can have various effects, such as forcing enemies to skip their turn or helping your units boost their stats. Use them wisely, as this is an important step you need to take before you get into combat proper.

The map is divided into different quadrants featuring forest, houses, and woods that you may draw from for different recruits. You can claim these spaces to recruit additional troops or get new cards here, so this Is an important step to take. Getting familiarized with all of the cards throughout the game may be a challenge at first, but it's well worth doing so.

Once it's time to begin, you're ready for Combat mode, where the game shifts to more of a turn-based Fire Emblem-like affair. You can select your individual troops and units and assign orders to them, moving them around the map grid and watching them duke it out with enemies as necessary. You can play cards to help turn the tide of battle if you so choose, but they do cost stamina points to use, which makes it a bit more difficult to make great strategies in the heat of battle.

If your card selection isn't doing it for you, you can always attach damaging bonuses to your troops by beefing up the units you have standing menacingly around your enemy. This type of combat is addictive and well worth digging into since you're already here for the vampire lore, anyway. When you succeed in combat, you'll earn more blood (currency) and expand across the entire map, all of which is simply divided into different regions that either contain townsAs far as what to expect from Darkest Dungeon 2 in the future, it was originally announced back in February 2019. We haven't heard much more about it since, but we do know it will offer a much different metagame than the original. It will also feature much more refined combat. Narrator Wayne June and composer Stuart Chatwood are on board for the sequel as well as the special effects team Power Up, additional enemies to fight off, or even allies.

Completing battles feels rewarding and does pay off, especially if you want to advance the lore. I was interested in seeing how Cecilia would take the news that humans had been responsible for the deaths of so many of her brethren and understanding why they had done it in the first place. That's why I appreciated Immortal Realms: Vampire Wars so much over the short time I was shown the game. It feels like a familiar hodgepodge of different games cobbled together into just one with some veritably hardcore and exciting elements from the strategy genre thrown in for good measure.

I wasn't able to see more than these campaign missions or beyond the Dracul, but I came away satisfied and ready to see more at the next opportunity. Luckily, that won't take very long. Immortal Realms: Vampire Wars is targeting a spring 2020 release on Xbox One, PlayStation 4, Nintendo Switch, and PC. We just need a tiny bit of time back in our coffins to wait things out.