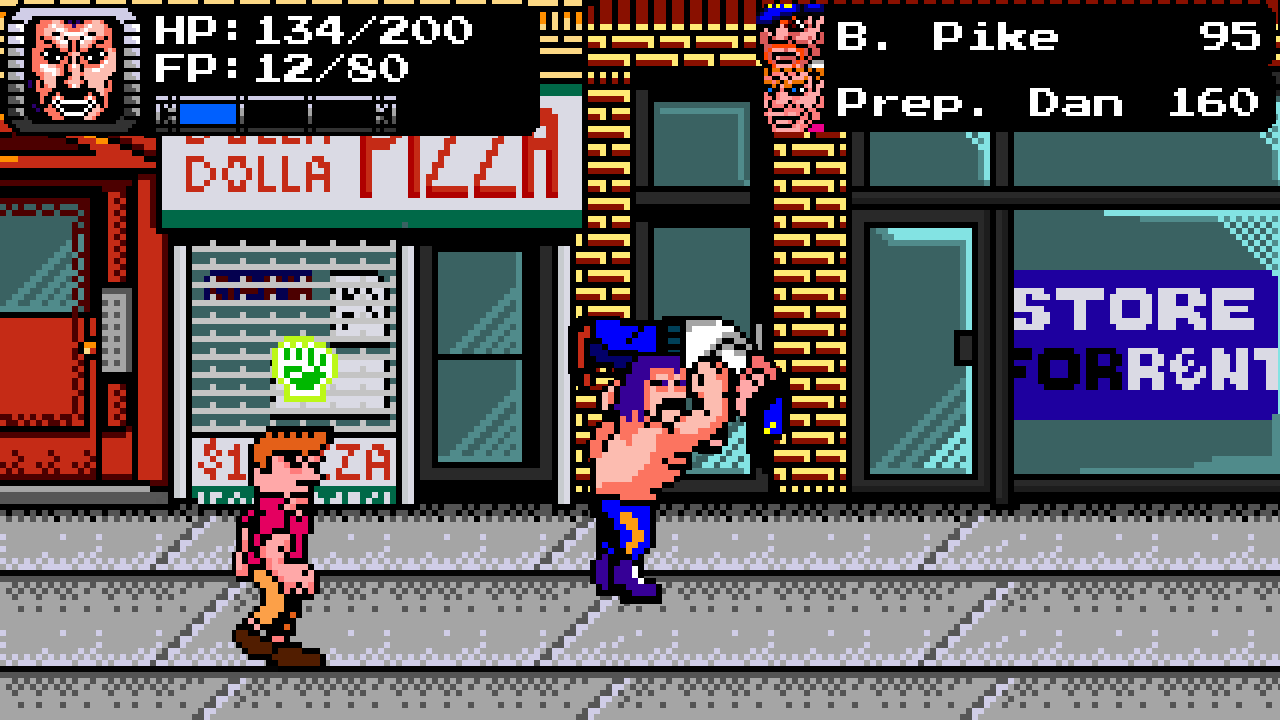 Brawlers are an old-school genre that I've looked back at with a lot of fondness. I remember being raised on games like Final Fight and Double Dragon and it's likely that a lot of today's game developers have as well. Treachery in Beatdown City is one of those games that hopes to tug at those nostalgic heartstrings while also throwing in elements of an entirely different genre. And while it's an admirable effort, the result is something that feels too slow-paced and plodding to feel enjoyable.

So here's the setup for Treachery in Beatdown City. President Blake Orama has been kidnapped by Ninja Dragon Terrorists, while the city's police chief looks to reassure the populace in broken Spanish. If that doesn't induce a chuckle, I'm sorry to say that the humor doesn't get any better from there. The dialogue is okay at best and cringe-inducing at worst, as it quickly becomes evident that humor is not this game's strong suit.

The game then gradually introduces its cast, starting with police cadet Lisa Santiago. Along with Brad Steele and Bruce Maxwell, each of the game's playable characters has a distinct fighting style, one that takes advantage of different aspects of the game's combat. This is where the game starts to feel less like a typical beat 'em up and more like a turn-based RPG. That's both to the game's credit and to its detriment.

Treachery in Beatdown City is a brawler at heart, one that looks like it was pulled right out of the late 1980s with its 8-bit graphics. However, it's also presented as an RPG. Players can engage with enemies and browse a full menu of possible attacks that range from strikes to grapples. They can only pull off these special attacks if they have enough resources, so if the Fight Points resource meter is low, the idea is to dance around and avoid conflict until the FP meter is refilled. Likewise, if enemies attack, it's possible to use the FP meter defensively.

The problem here is that the game dives into a multitude of tutorials, explaining to players different ways they can combine attacks, which attacks can beat which types of opponents, the myriad of ways to defend, and all of it comes across overly complex. Sometimes, you just want to put your fist in another guy's face. It shouldn't be anymore complicated than that. And what's funny is, that direct approach often does end up winning the day. As helpful as the special strikes and grapples are, they'll more often than not miss and leave you open to strong counters. You'll often take more punishment trying a special and missing than you will if you simply stick and move like any traditional brawler. Trying to stick to the RPG mechanics feels even more unfeasible when encounters place more than one enemy on the screen.

Beatdown City's structure also works against it. Instead of walking across a fully-designed stage, fights are separated off into single RPG-like encounters spaced out across an overworld map. That slows the pace significantly and leads to a lot of pauses in the action. And this is not a game that needs those kinds of stoppages, because movement in Treachery in Beatdown City is painfully slow.

Even while you'll more often than not lose some of the later fights and have to start them from scratch, Treachery in Beatdown City isn't a particularly long outing. In fact, it openly ends on a cliffhanger and teases more chapters to come down the road.

Unfortunately, because the pace feels so plodding and this beat 'em up formula doesn't mix particularly well with RPG-style combat, it's hard to recommend coming back for more. I like Treachery in Beatdown City's concept, but it's not something that really worked for me in practice. You can't always mix peanut butter with chocolate and end up with something good.

This review is based on a Steam code provided by the publisher. Treachery in Beatdown City is out on PC and Nintendo Switch. It is available now for $19.99. The game is rated T.