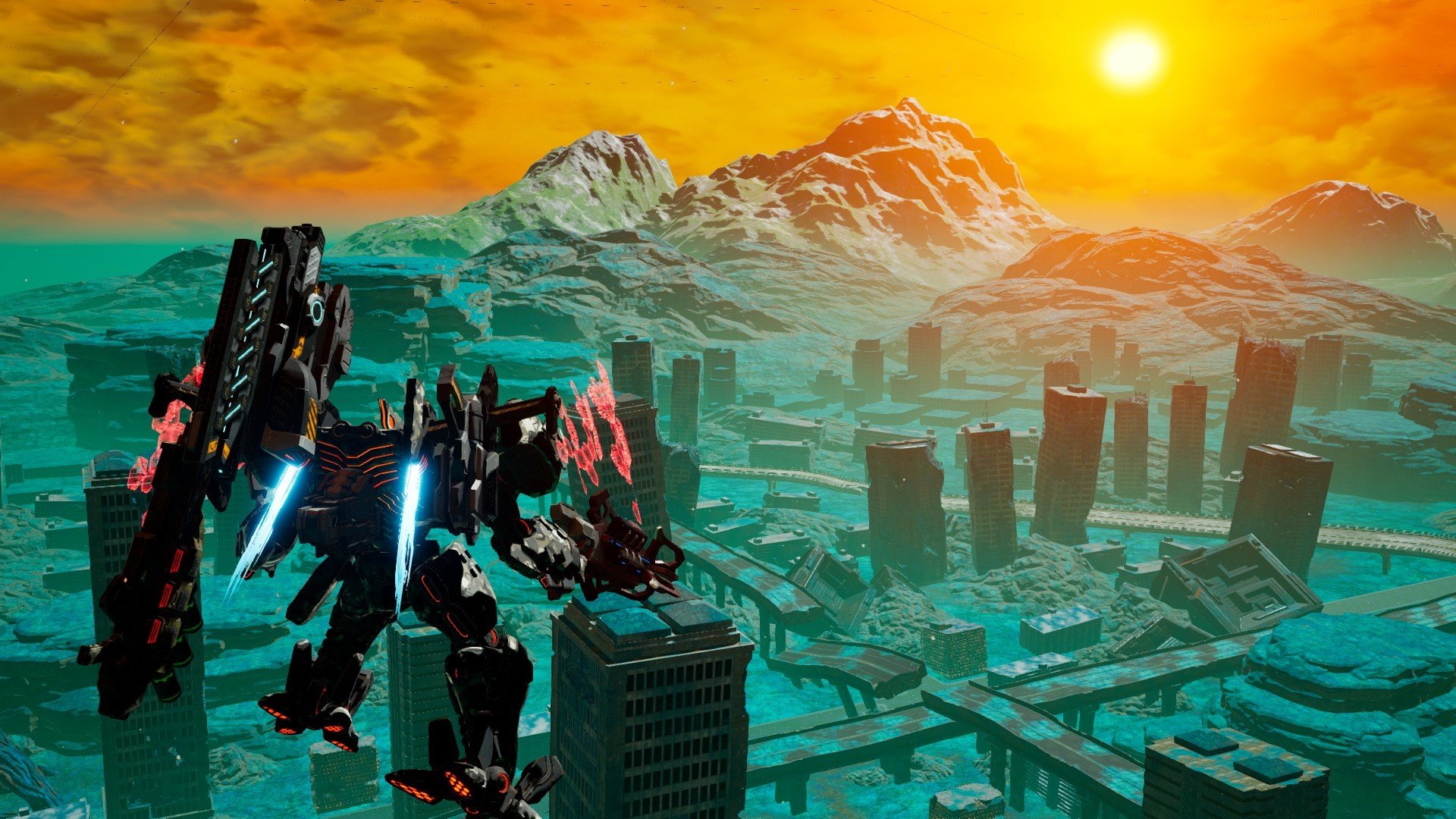 In a world that has moved on from sci-fi mech shooters to embrace the world of FPS games and over-used horror tropes, Daemon X Machina aims to bring back the love that gamers had for a somewhat simpler time. While the game fails to deliver on a few important cues, overall, it’s a fun, frantic, and visually appealing experience that fans of mech games will enjoy diving into.

Cut your teeth on this, Rook

You start Daemon X Machina as a rookie in a mercenary group dedicated to fighting evil AI in the name of big corporations. As you dive deeper into the story, you’ll meet other mercenaries—all fighting for their own reasons. It’s a bit convoluted when you really start to pay attention to the story, but overall the idea works well enough.

Sadly, there isn’t much depth to the story. The game really wants you to care, but it never does enough to make you want to care about the characters, or even the status of everything. Despite the heavy emphasis on the story at the start, the game quickly devolves into a repetitive shooter that only seems to showcase that story in text and random conversations between missions.

The gameplay is fun at its core, but the problem here is that Daemon X Machina falls into the same holes that just about every other anime-mech game does. Missions quickly grow repetitive and bland, with the once visually stunning landscapes starting to blend together as you play more and more. Go to this location, defeat this AI. Next time you go to a new location in the same area and fight another AI. Sometimes this monotony is broken up by massive boss fights with gigant-class AI, which are basically just bullet sponge enemies designed to take all of your ammo and still keep chugging.

How much is too much?

One of the best things about Daemon X Machina is the customization. You’ll find an insane amount of customization on show here, both in your Arsenal (the mech you pilot) and for your character, too. But, as you continue to add new weapons to your mech (you can have six on you at a time), at some point or another it all starts to blend together.

Is this assault rifle actually better than the last one you had? Do you really need that rocket launcher upgrade? The answer is usually going to be no, but that’s not going to stop you from wanting to unlock it anyway. It’s a novelty that wears off by the time you reach the higher ranked missions (you start a Rank E, then move up through the alphabet), but still one you’ll find yourself worrying over as you continue through the game. Your loadout never feels quite perfect thanks to the absolutely mind-boggling number of weapons available, something that’s worth praising and also cursing at the same time.

Perhaps the most intriguing part of Daemon X Machina’s customization is the fact that you can customize your pilot by adding mechanical arms, bionic legs, and other machine-based body parts. These unlock upgrades which can allow you to carry swords on your pilot in battle (you can easily swap between your Arsenal and foot battles later in the game). The aforementioned bionic legs allow you to jump greater distances, letting you cover more ground in quick moments. It’s a nice system that serves to offer greater options for the player, something that many games in this genre have skimped out on in the past.

The biggest weakness for Daemon X Machina is that the game really fails to grab players and offer a diverse enough experience to keep them enthralled for the roughly 25-30 hours of playtime that it will take most users to complete the story. As mentioned above, missions get extremely repetitive a few hours into the game, and the story is a mess of weird conversations over battles and hard-to-find text conversations that you might miss out on if you accidentally skip a cutscene after a mission.

There’s a lot about Daemon X Machina that feels good, but also a lot that fails to deliver. It would have been much better if the developers had focused less on trying to make you care about the story. A mech game not having an in-depth story isn’t something new. In fact, it’s something we’ve seen in so many games in the past. The problem here is Marvelous wants you to care about the story—something that is made impossible thanks to the weird cutscenes and jumbled text conversations.

The emphasis on customization is perfect. There’s a lot of depth to customizing your character and Arsenal and really setting out your weapons. Being able to seamlessly swap between a sword, an assault rifle, and a shield is one of the best things about the game, and it helped to spice up combat along the way. I wish that the enemy variation was a bit better, though, and that combat wasn’t often overshadowed by line after line of voice dialogue that I couldn’t pay attention to as I was too busy fighting off waves of enemies.

While Daemon X Machina is now available on PC, if you want to get the most out of the game, I highly recommend picking it up on the Nintendo Switch. Thanks to the repetitive combat, and the overall confusing cutscenes, Daemon X Machina is one of those games best played in small doses. The Nintendo Switch is the perfect console for those types of games, and while you’ll find smoother framerates on the PC port, you can’t take this version of the game with you on day trips out to the city.

That’s not to say that Daemon X Machina is a bad game. The offering here is on par with just about every other mech game we’ve seen over the past few years, and while there are things that could be better, the stunning anime-style visuals and the sheer amount of customization are two things that make it shine. If you’re a fan of the mech games of yesteryear, then Daemon X Machina is a nice trip down a road packed with nostalgia. Just don’t expect a trip without any potholes, sharp turns, or dead ends—because this adventure is absolutely loaded with them.

This review is based on a PC copy of the game provided by the publisher. Daemon X Machina is available on Nintendo Switch and PC right now.