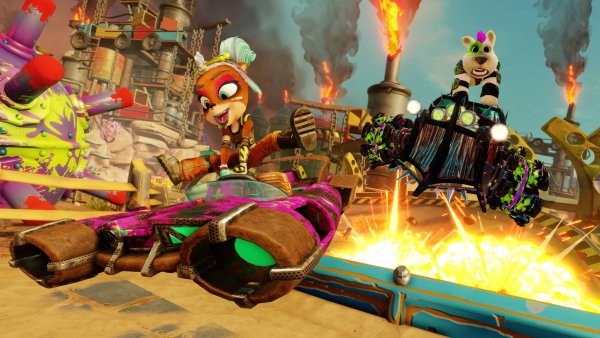 Get ready to hit the race track with Crash Team Racing Nitro-Fueled, which is about to launch its seventh free Grand Prix season.

This particular Crash Team Racing season is called the Rustland Grand Prix, and it's set to run from January 16 through February 16. You'll head to the post-apocalyptic wasteland of Rustland, where you can unlock a series of new skins and karts while filling your Nitro Gauge up enough to earn a new character.

The new character is Mega-Mix, a mutant combination of Dr. Neo Cortext, N. Gin, Tiny Tiger, and Dingodile, who looks like a pretty bizarre Frankenstein. You can use Mega-Mix on a new track called Mega-Mix mania too, to take the theming even further.

Of course, a new Grand Prix would be nothing without new karts as well, of which you can unlock three of this season. Gear up to hit the track as you use new customization items like Rutland-inspired paint jobs, Rustland skins, and stickers as well as spray-paint decals and wheels for tagging If you finish the race in the top five percent of the Grand Prix leaderboards, you'll win the Champion Kart and Rustland signature decal as well.

The festivities are going on now, so if you're hyped about another reason to return to Crash Team Racing Nitro-Fueled, consider this the next stop you need to make. Just make sure you brush up on your karting skills before hitting the new track and squaring off against your opponents. They mean business.