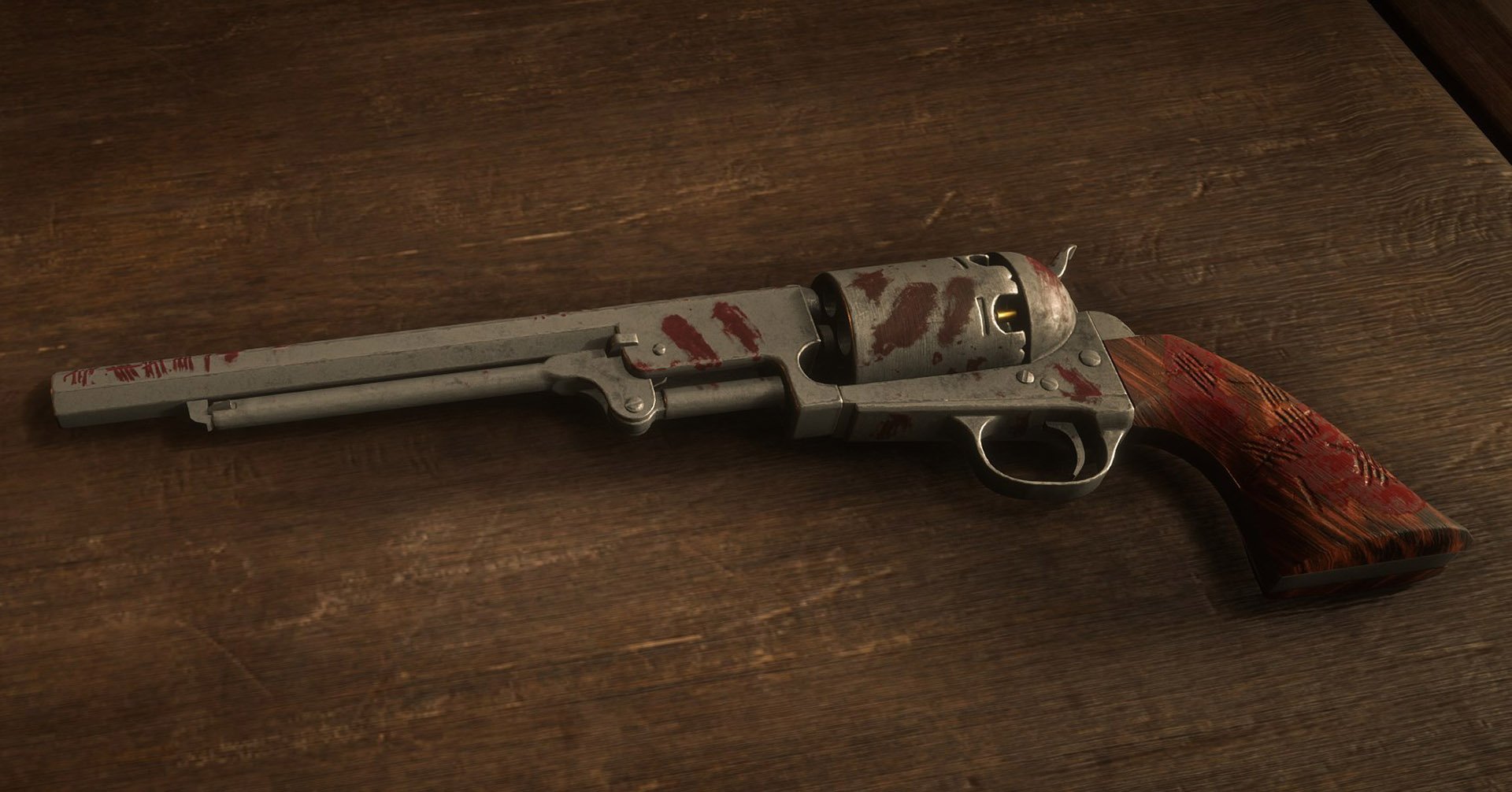 How to get Lowry's Revolver in Red Dead Online

How to get Lowry’s Revolver in Red Dead Online

Since this is a bit of a crossover event, you’re going to first want to make sure your GTA account is linked up to the same Rockstar Social Club account as your Red Dead Online account. Otherwise, you won’t be able to unlock Lowry’s Revolver in Red Dead Online. Once you’re sure that the two accounts are connected, go ahead and load up GTA Online.

There is a total of five clues you need to track down to call out the Los Santos Slasher. The first four are fairly easy to find, but the fifth clue can be tricky thanks to multiple possible spawn locations

The first clue can be found up in Paleto, at the small lodge near the gondola lift on Great Ocean Highway. Listen out for whispers and approach the back of the middle area of the lodge. You should spot the bloody handprint on the door. Approach it and inspect it to add it to your file.

The second clue can be found down in Grapeseed. From the first clue, head through the mountains via the road that runs along the northern part of the lake between Sandy Shores and Chiliad. Make your way to the area we’ve marked on the map and look for a barn in the open field. Approach the barn and listen for whispers and look out for the machete in the side of the barn.

Clue 3 – Message from the Slasher

The third clue can be found southwest of the Redwood Lights track, between the northern portions of the map (Sandy, Harmony, Route 68) and the Los Santos city proper. Head to the bend in the road to find a large farm area. This next clue can be found on the side of the barn. The words ‘Can you find me?’ must be inspected to add it to your collection.

Next players will want to head to the airstrip just outside of Sandy Shores. Follow the road that runs along the northwestern edge of the airstrip and look for a group of garbage bags near the side of the dirt road. Approach the area and lookout for a severed hand on the group. Inspect the fourth clue to move on.

For the Los Santos Slasher Revolver, This is the fifth clue. This is definitely random. Once you've collected the fifth clue, the slasher will appear after 2 minutes. Remain on foot these 2 minutes. pic.twitter.com/BzpSnVlgy7

This is where things get a little tricky. While many originally believed the fifth clue only had one possible spawn location, we’ve now learned thanks to The Game File Gurus on Twitter, that there are five possible spawns for this location. You’ll also only be able to find this clue between the hours of 21:00 and 4:00 AM, so you will need to act quickly.

Basically, head to one of the locations listed on the map above and lookout for a black van with the back doors open. If it isn’t at a location, head to the next one on the list. When you approach the van, you should hear the whispers letting you know that you’re in the right area. Approach the van and inspect the garbage bags and machetes in the back to trigger the final clue.

How to unlock the Navy Revolver in GTA Online

After you do this, you’ll receive a text message from an unknown number threatening you. When this happens, start walking from the main area where you are and just keep walking until a hillbilly spawns nearby and runs at you with a machete. You should get a notification on your screen that the Los Santos Slasher is coming for you. Kill the slasher to get the Navy Revolver.

Now that you have the Navy Revolver, it’s time to actually unlock Lowry’s Revolver in Red Dead Online. To do this, you’re going to need to earn 50 total kills with the Navy Revolver in GTA Online. Thankfully this counts for any kills, so all you really need to do is find somewhere to hole up and then take out a ton of cops. This is by far one of the easiest ways to acquire the kills needed for the challenge.

Unfortunately, it does look like some people have reported some bugs with the quest portion that takes place in GTA Online. If you experience these issues, it’s recommended to verify you have all of the clues and then return to one of the spawn locations. If the Slasher doesn’t spawn for you right away, continue walking and he should eventually pop up.

Once you have acquired the 50 kills needed to unlock Lowry’s Revolver in Red Dead Online, you’re going to need to actually get the weapon. Exit GTA Online and load into Red Dead Online. We suggest heading to your Camp, or spawning somewhere in New Hanover, as this will make it easiest to get to Valentine, which is close to the revolver’s location.

Fast Travel (or ride your horse) to Valentine and then make your way west to this old, crumbled house. If you’ve done any amount of exploring or collecting runs in Red Dead Online, then you probably have noticed the closed cellar doors that lead beneath the foundation of the house. If you have completed the process in GTA Online complete, these doors will now be open, allowing you to head inside to a dark and creepy lair. Open the Lockbox inside and you’ll unlock Lowry’s Revolver.

Now that you have Lowry’s Revolver, you’ll have completed the process. Make sure you head back over to our Red Dead Redemption 2 guide for more in-depth strategy content like this. You can also check out our guide on all Legendary Animal locations if you’re looking for more secrets in Rockstar’s latest open world. Also, before we go, we want to toss up a huge thanks to the GTA and RDR2 Reddit communities for figuring out the locations of each clue and how to unlock the revolver.

How to swim in Animal Crossing: New Horizons