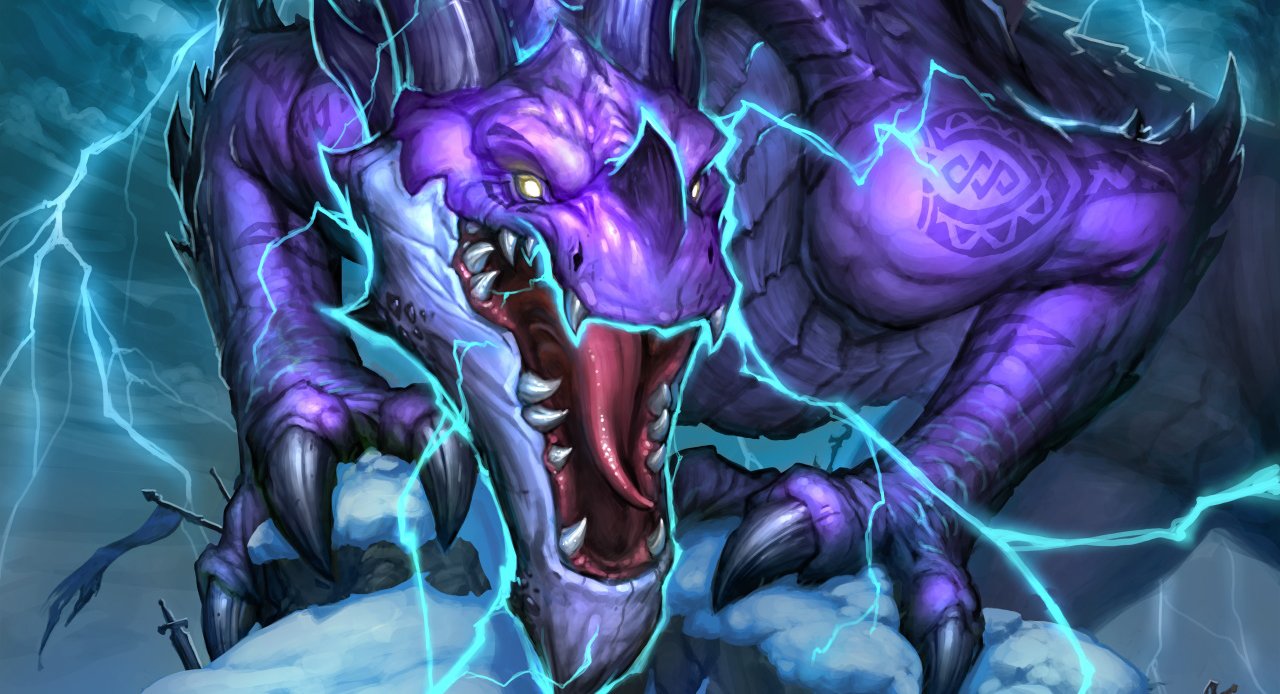 Hearthstone is set to release its third and final expansion for 2019 in the next week. After chasing the League of E.V.I.L. through the floating city of Dalaran and across the deserts of Uldum, the Year of the Dragon concludes this year-long storyline in the skies of Azeroth! Blizzard has summoned every dragon it could bring together to take flight for Hearthstone's next expansion, Descent of Dragons.

Card reveals for Hearthstone: Descent of Dragons have begun and that means it's time for Shacknews to once again break them down one-by-one. Before we start, let's look at one of the big themes for this expansion: Galakrond. Galakrond is a total different animal, so we won't mix his cards in with these analyses. We'll look at each class' Galakrond separately. For now, let's focus on the other cards and how they'll affect the Standard and Wild metas.

If you've missed the analyses so far, take a moment to catch up:

Let's continue with more card reveals from the Hearthstone community.

Analysis: Zephrys the Great proved to be a complete terror in the Saviors of Uldum expansion. So what's the best way to stop him? You stop his trigger condition by putting multiple cards in your opponent's deck.

So here's the Bad Luck Albatross, one of what I'm sure will be many anti-Zephrys and anti-Highlander strategies. It's a risky play to put more cards into your opponent's deck, but a nice 4/3 Beast in exchange for momentarily delaying the Zephrys trigger is hard to argue with. I can see this going into a few control decks.

(6) Dragoncaster (4/4)
Type: Minion
Class: Mage
Rarity: Rare
Battlecry: If you're holding a Dragon, your next spell this turn costs (0).
Source: ArMor on Facebook

Analysis: This is an astonishingly powerful card, just because of the types of spells that the Mage can get off the ground while still getting a 4/4 body on the board. The spell that should be on everyone's mind is Luna's Pocket Galaxy, which can take the Mage's Dragons and other minions and discount them to (1) quite easily and with a much lower risk.

The other potential use for this could be in an aggro Mage deck. Mage players looking to end this game quickly can spend the first few turns going face before stunning their opponent on Turn 6 with Dragoncaster and a free Pyroblast.

A total winner for the Mage, just as long as they have a Dragon readily available. Kalecgos should be a no-brainer.

Analysis: An absolutely astounding card for the Mage player. At worst, it's a low-level single-target spell. At best, it's a Turn 1 removal option that gives the Mage player another spell for later in the game. Quest Mages will love this. Even Big Spell Mages might find a place for this. A total winner, just as long as...again, you have a Dragon around. So get to crafting Kalecgos, already!

Analysis: For a Shaman Legendary, it's hard not to feel a little disappointed by this. It's an interesting concept, but the end result of putting three minions on-board feels like it's been done better with other minions. And unlike something like Stone Sentinel, the other bodies have to survive the turn intact to become active. The 0/3 Eggs are not Deathrattles. They have to survive, so when Nithogg gives you eggs, just make omelettes.

(5) Bandersmosh (5/5)
Type: Minion
Class: Shaman
Rarity: Legendary
Each turn this is in your hand, transform it into a 5/5 copy of a random Legendary minion.
Source: Thijs on YouTube

Analysis: In concept, this is interesting. The idea here is that this is a much better Shifter Zerus, in the sense that instead of transforming into a random minion, it becomes a random Legendary, albeit at 5/5 stats with a cost of (5). That still makes it an ideal card to pair up with something like Faceless Manipulator under the right circumstances. With the current field of Legendaries, it shouldn't take too long to come upon one that will prove useful.

While it's hard to imagine a Standard deck that could work with this, Arena players love their 5-Cost 5/5 minions and they really don't come better than this one. So I'd expect this to find a lot of love there.

(5) Stowaway (4/4)
Type: Minion
Class: Rogue
Rarity: Rare
Battlecry: If there are cards in your deck that didn't start there, draw 2 of them.
Source: Blizzard - China

Analysis: This card is much better than it looks. The idea is that it doesn't draw cards, it draws specific cards, namely ones that you generated over the course of the game. The Rogue player has quite a number of tools that does just that. Togwaggle's Scheme comes to mind right away. But the better card is Shadow of Death, because Stowaway can draw two of those Shadows and play them on the board right away.

Analysis: Emperor Thaurissan is going bye-bye back to Wild by the end of the week, so there aren't a lot of cards that will discount whatever's in your hand or your deck. This Legendary specifically targets Dragons in your deck and could be incredibly powerful in a Druid deck. A lot can happen if you can discount your Malygos.

But the likelier destintaion for this Legendary is going to be the Dragon Paladin, given the glut of Dragons that the Paladin has gotten over the course of the year. Between this and the various Dragon-buffing tools, this is another valuable tool in the Dragon Paladin deck.

Analysis: KABOOM! Depth Charge isn't something you'll want to pack into your deck, because if you absolutely insist on this kind of board control, Doomsayer is right there for one more mana. No, Depth Charge looks like one of those minions that was designed for random effects. And it's one of those cards where you're going to kick something the moment it randomly spawns in and threatens to wipe out your side of the board.

Analysis: What a fascinating card. So this is basically a Prismatic Lens kind of card, but for both players. So the idea is, you put this card in a deck full of expensive cards and hope that you can pass the expensive cost onto your opponent while getting something less expensive in exchange.

A lot has to go right for this card to work. Malygos Druids won't want to risk this, because odds are you'll draw Moonfire before Malygos. You also have to hope that you're not drawing an equally expensive card from the opponent. You might be able to take a chance with Bad Luck Albatross and hope you draw the opponent's 1-Cost Albatross, but that's risky. In fact, this card, as a whole, is a big risk.

Analysis: This would be a pretty awesome hammer for the Shaman, except... it's not a Shaman weapon. It's a Hunter weapon. It's hard to picture Rexxar and a giant hammer, but this is a pretty nice hammer and a wildly strong one, all things considered.

Dragon Hunter hasn't really been a thing before, but having Dragons at the ready means your Stormhammer never loses Durability. That makes this a permanent Eaglehorn Bow, giving you the opportunity to hit the opponent repeatedly in the face, turn after turn.

With the glut of Dragons in this expansion, creating a Dragon Hunter deck should be pretty easy and this weapon will prove to be the MVP of that deck.

Analysis: Here's a fun new Legendary for the Priest player, one that can be played on curve or in the late game. This tries to turn the tables on the opponent by summoning an enemy minion on board. If there's an opposing Deathrattle, that makes this an enticing minion to pack in. Better yet, as demonstrated in the Instagram story, there is a lot of synergy with this minion and Wretched Reclaimer, which could give you more than one of the opposing minion. This is a strong one for the late game and has the potential to pull off some shenanigans.

Analysis: Meddlesome insects! Here's the new spiritual successor to Duskbreaker. The difference is, this is a Deathrattle and this only affects enemy minions. That's pretty good, along with that 4/5 stat line. And as seen in the Instagram story, this is another one that synergizes well with Wretched Reclaimer. A very strong card for the Control Priest and one that will see a lot of play.

Analysis: An excellent early game minion for the Dragon Paladin, one that allows them to bolster their hand with a fresh Dragon for the late game while also getting Lifesteal to help make up any early deficits. This should find its way into every Paladin deck in both constructed and Arena.

Analysis: Here's a Top 10 card right here, depending on the class. Each class has their share of useful 1-Cost spells and a 3/5 body is definitely worth rolling the dice on getting two random ones. The Quest Mage is absolutely packing this into their deck, since they'll have two new tools to help complete their quest. The Priest has some particularly powerful 1-Cost options, like Embalming Ritual and Power Word: Shield. And then there's Rogue, which has a good chance to pull out a Togwaggle's Scheme from this.

There's practically no downside to this card and it's going to be a mainstay in almost every deck. An A+ minion for this expansion and beyond.

Analysis: This is a pretty good Lackey generator for the Warrior player. They can essentially dump the EVIL Cable Rat and just run with this guy instead, getting both a Lackey and a quick three Armor. This should fit nicely into a lot of control decks while also supplying some additional resources, which makes this a good pickup in both Standard and Arena. Good stuff here.

We're a good chunk of the way into looking at Descent of Dragons cards. Come back throughout the next few days as we give the full set the analysis treatment prior to the expansion's release. Hearthstone: Descent of Dragons is set to release soon.